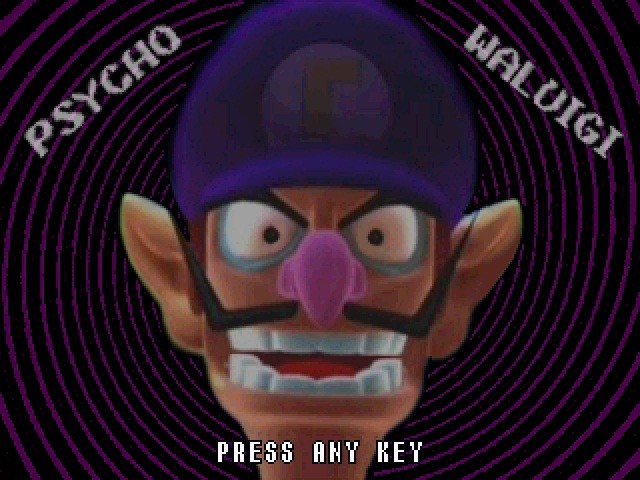 So about a year ago, I was browsing this great website known as mfgg.net, which is home to a TON of Mario themed fan games as well as custom sprites and sound effects. One of the top rated games on the site was a little title known as “Psycho Waluigi” made by the same guy responsible for the website: Thunder Dragon. I downloaded the game based on the ratings and oh man, what an experience! In fact, I posted the first time I played through the whole game with complete commentary here. Needless to say, the game was absolutely incredible and may be one of my favorites to date! It goes to show just how creative and dedicated Nintendo fans can be.

The game has a pretty simple storyline: everyone’s favorite(?) bad guy, Waluigi, is floating around in a hot air balloon, throwing his telescope and passerby birds. One decides to cut the strings of his balloon, sending Waluigi crashing down to the world below and waking up in the mythical land of Unconcia. In this land, Waluigi awakens as a psychic, as told by the disembodied voice in his head known as Psycho Iris. Perhaps the most interesting fan character to date, Psycho Iris is represented throughout the game as a translucent floating cloud above Waluigi’s head with an eye in the middle. Psycho Iris understands Waluigi’s fiendish ways and convinces him to take over Unconcia by toppling kings that sit at the end of every level.

Psychic powers are the main gimmick of this game. Waluigi can use his abilities to pick enemies up and throw them in order to clear his path. But, these enemies also serve as projectiles that can be used to defeat other enemies and defeat the king or queen at the end of the level. Psycho Waluigi features classic Mario-themed platforming and nails it perfectly as well, allowing you to stomp on enemies. But psychic powers? Oh, man. What an awesome addition. Sometimes, certain enemies can be used as complete weapons. Some of them create a Mega Man-style weapon bar underneath Waluigi’s health and can be used multiple times. A certain walrus allows Waluigi to fire out a continuous ice blast that freezes enemies in their tracks. You can also pick up Piranha Plants and use their trademark fireballs if you so desire as well. Later on, there’s even an angry starman that’ll attack Waluigi before you grab it. Then, you can use the starman to give yourself invincibility! Oh, it’s such a cathartic experience.

Each level is complete with its own theme and very cleverly named. One is based entirely out of soap in which you must use your psychic powers to chip away at it and formulate your own platforms in order to progress. Another is based off of toilets and sewers. I’ll never forget one of my favorite moments in that particular level. At the beginning, you stand with the option of entering either the men’s bathroom or the women’s. Comically, I entered the women’s room and was quite avidly punished by a bunch of shuriken-throwing female ninjas which made my health rapidly drop! Now, I never went back to see if anything similar happened if I were to have selected the men’s room, but it was still hilarious! It’s the little things like that that make a game memorable for me.

Perhaps one of the most interesting things about the game (and one that I found out much later) is that it’s not about reaching the end of the level. No! In fact, Psycho Waluigi is a bit of a collect-a-thon! At the end of every level, you’ll be rewarded with a different color crown based on how many jewels or coins you collected throughout. It adds a whole lot of replay value to the game, since your long term goal is to achieve a gold crown on every single level. Yep, in traditional Mario style, there is an unlockable bonus world that adds more levels with each milestone in gold crowns you achieve. Each level is littered with hidden jewels. Occasionally, you might find one colossal golden jewel that is very cleverly hidden or trapped behind a puzzle or some challenging obstacles. A word of advice: try to find them all! It’ll make getting that big gold crown a whole lot easier. And man, it’s really satisfying when it’s awarded to you!

There’s no real reason not to try this game out! It’s 100% free and a real masterpiece. It even has some original music! In a perfect world, we’d see Psycho Waluigi adapted for the 3DS eShop. I really like that Thunder Dragon decided to show a little love to Nintendo’s most under-appreciated villain. I think the game moved Waluigi up into my top Nintendo characters instead of being just some other character I skim over. I HIGHLY encourage you to check this game out if you’re into Mario games or even platformers in general. Or maybe you’re just looking for something fun that’ll BLOW YOUR MIND! Regardless, this game is probably right up your alley! It’s definitely worth a download.

If you’re interested in playing the fan-made masterpiece that is Psycho Waluigi, you can download it here for FREE.