Home Geek LifeCulture Get Excited for The Amory Wars
CultureEntertainment 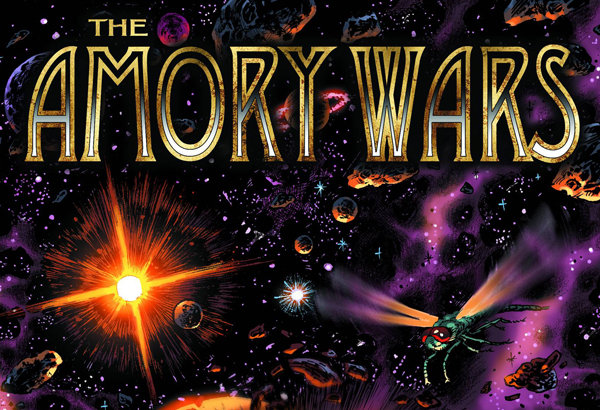 Coheed and Cambria are a band that really stands out from the rest. Hard to define genre-wise (landing somewhere between Alt-Rock, Progressive, and shades of Pop), they have been releasing quality music on a consistent basis for over a decade now, all of which is impossibly high concept.

The New York-based four-piece are fronted by insane-haired Claudio Sanchez; from his brain, a universe has spilled forth. The meta-narrative behind the songs (beyond common song themes) take place inside a universe formed of seventy-eight planets, held together in a tight triangle formation in space by an energy field called “Heaven’s Fence”.

Over the six albums, we initially follow the titular Coheed and Cambria, a genetically engineered husband and wife unaware of their fate to destroy the energy field. Later we follow their son, Claudio (hey, so it’s a little self-indulgent) as he battles against the maniacal Mages, the evil overlords. Albums of side-stories deal with the pre-history of the universe, including last years “The Afterman” which examined the life-forces sustaining Fence in two parts.

If you managed to follow all of that, you’ll notice it sits squarely in the “geeky” realm of things; a Star Wars-esque science-fiction opera, blasted out at high volumes by a guy who has occasioned to play double-necked guitars.

But, rather than being confined to the category of “nice but niche”, what is truly amazing is how well this project has taken off. This shy, aspiring kid has grown into a fully fledged rock-star, sharing the stage with Iron Maiden, playing heavy festivals and light acoustic shows in between. The relative obscurity of the lyrics and content hasn’t deterred them from since branching into graphic novels as companions to tell the story.

Now, the story has another string to add to its bow. Last year, Sanchez announced that he was working with Leverage to develop a full on movie, telling the story of The Amory Wars (the overall name of the series). Even better, the indefatigable Mark Wahlberg is signed on to produce (having developed Entourage and Boardwalk Empire previously), so it’s likely to be part-insane and all awesome.

This meteoric rise of the band really stands for me as a shining examples of how far “geek” culture has come. Sure, the incredible success of the Avengers and the slew of comic-book movies coming out this year show the trend, but The Amory Wars is a cut above because of its scale.

Not only is this successful space opera as geeky as it is infinite, but it spans media: the movie trend that Marvel is successfully riding right now; the renewed interest in graphic novels (thanks to The Walking Dead etc.); and enters where no geeks have really gone with any mainstream success – music.

So get on the bandwagon, and get excited. If this movie fall through, then the fact it was even being considered by such big names is a true testament to how much geeks own the airwaves. Long may it continue.