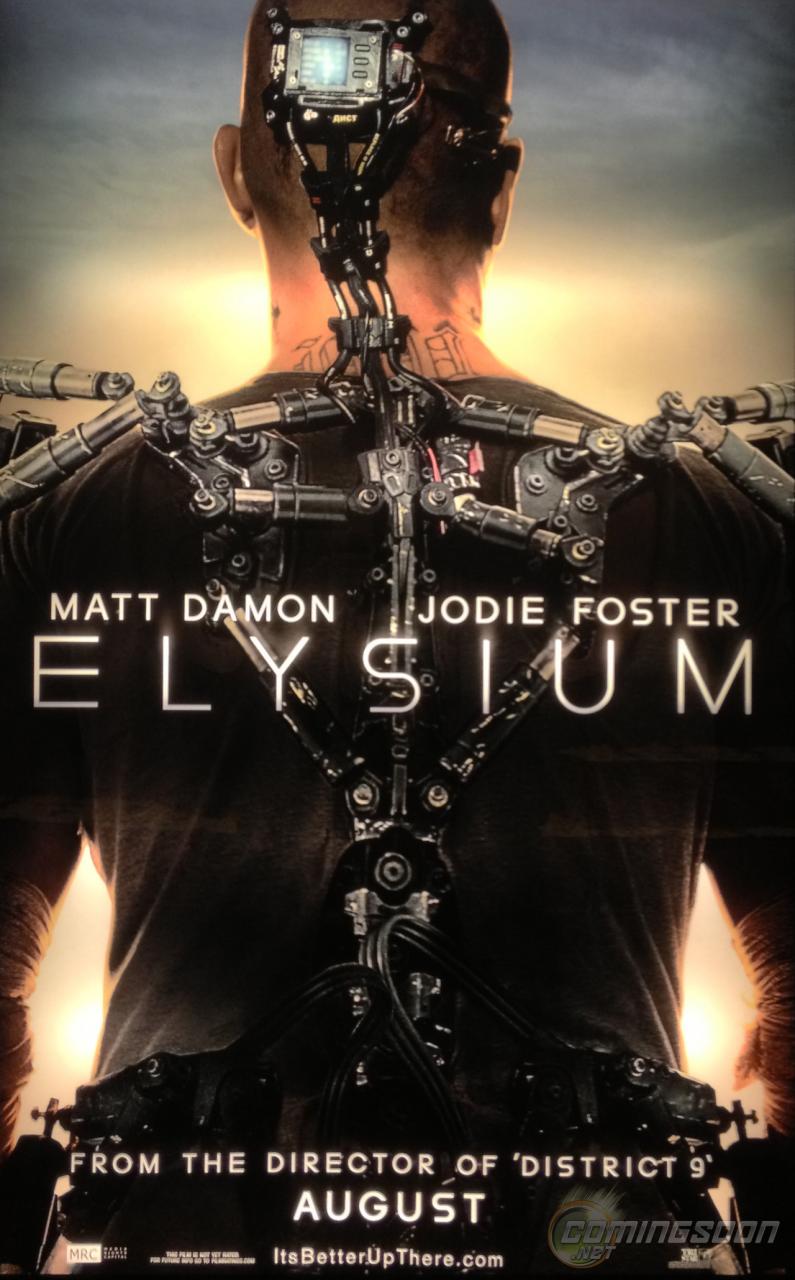 After the horror that was Percy Jackson Sea of Monsters, I went on a quest to find a movie that had memorable characters and electrifying action. I found it with Elysium.

Elysium is the second movie directed by Neill Blomkamp following the critically acclaimed District 9.  However, this time he has a bigger budget and star actors to fill the screen and it is definitely evident by the finished product.  The movie looks amazing and the actors are all in top form.

The film is not as deep or as thought-provoking as District 9, but Blomkamp makes up for it with thrilling action sequences and stunning visuals to go along with his latest social commentary-laced story.

Elysium is set in the middle of the 22nd century.  Earth is overpopulated, over-polluted, and overrun with disease and poverty.  The wealthy elite decide they’ve had enough and create Elysium, a floating habitat in space that is free of crime, pollution, and sickness.

You immediately get the sense that living on Earth would not be your first choice; the world is clearly decaying as opposed to the lush blue and green paradise of Elysium.  Even the way the scenes were filmed (lots of shaky handheld cameras for Earth versus wide sweeping shots for Elysium) show how gritty and depressing Earth has become. It is no wonder that so many of the sick and dying of Earth try to infiltrate Elysium for a chance at salvation and a better life (sound familiar)?

The story follows Max Da Costa (Damon), an ex-convict trying to make some semblance of a living in the ruins of Los Angeles.  He works on the factory floor of the Armadyne Corporation, the company that essentially built Elysium.  He hopes to save up enough money to one day go to Elysium, but after a freak accident leaves him on the verge of death, he must take more drastic measures to expedite the process.  With the help of his “friends” Julio (Luna) and Spider (Moura), he is given a way to do just that.

Meanwhile, Secretary of Defense Delacourt (Foster) is using questionable methods to defend Elysium, mainly in the form of the vicious mercenary Kruger (Copley).  After the President forces Delacourt to dismiss Kruger and adjust her methods, she organizes a coup with Kruger and Armadyne’s CEO (Fichtner) to reboot Elysium and give her complete control.  The two plot lines converge and we have ourselves a science fiction movie!

First of all, Matt Damon is a badass.  Ever since the speculations that he would be a poor action star when he was cast as the title character in The Bourne Identity franchise, he has proven time and time again that he is a badass.  If you’ve seen the trailers for this movie, you get a glimpse of what Max has to endure in his attempt to reach Elysium.  His transformation into what is essentially a Matrix-like cyborg is intense and cringe-inducing. Much like The Bourne Identity, he is able to both hold his own against formidable foes without looking like some invincible superhero.  Even with the additional machinery to aid him, he often requires the help of his childhood friend-turned-nurse, Frey (Braga) to heal him.

One aspect of the film that amazed me the most was Copley’s character, Kruger.  Copley was the main character and protagonist of District 9. In that movie, you remember how tragic his journey was and how he was an incredibly sympathetic figure.  However, Kruger is the exact opposite in Elysium. He transforms into, an evil-incarnate bastard whose only concern is his own well-being.  Blomkamp really drives home how awful of a human Kruger is, almost to the point of caricature, but I thought he did a good job of really giving us a villain to despise.

The action was also amazing to watch.  There were so many different weapons and tools that I felt like I was watching a violent version of Ratchet & Clank… and by violent, I really mean violent.  Almost every death in the movie received gasps from the audience.  At times, Blomkamp tried to channel his inner John Woo with a slew of slow-motion scenes and some of the hand-to-hand fights were shaky and hard to follow, but overall, it was breathtaking to watch.

Elysium had all the elements you want in an entertaining, futuristic movie and well worth watching.

The Walking Dead: The Game – Review