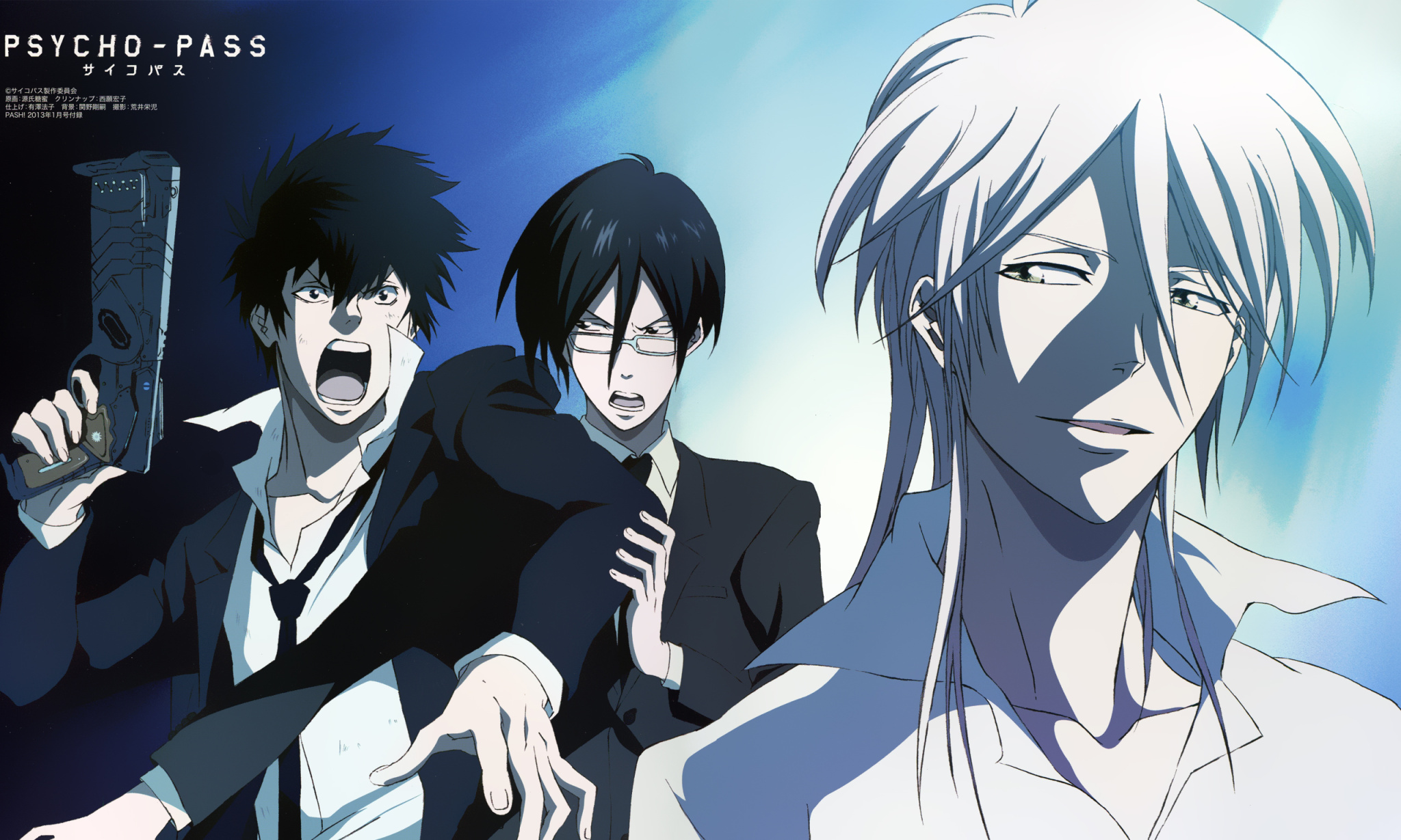 A couple of days ago I wanted to watch a dark style, psychological drama anime that full of thrills and mysteries similar to Death Note. A friend of mine suggested I might like Psycho-Pass because it is thrilling and graphic. Needless to say, she was spot on. This anime is absolutely brilliant! I literally watched the show in 2 days.

Psycho-Pass takes place in a dystopian futuristic Japan where technology has made it possible to instantly measure a person’s mental state and Crime Coefficient, or the likelihood to commit crimes, through a Psycho-Pass check. The measurement of a person’s Psycho-Pass is done by the Sibyl system and alerts authorities if anyone’s ever gets dangerously unstable. People with cloudy Psycho-Pass tend to also have higher Crime Coefficient. Inspectors (those who supervise Enforcers) and the Enforcers are like detectives that apprehend latent criminals. But, the twist is that Enforcers are deemed latent criminals themselves. Inspectors and Enforcers carry a gun called a “Dominator”, which are special weapons designed to fire only at those with a higher-than-acceptable Crime Coefficient. If they point the gun at some with a low coefficient then the gun will stay in safety mode and will not fire.

The anime follows the Division I Public Safety Bureau of the Ministry of Welfare as Inspectors and Enforcers work together to capture latent criminals before they do something bad. At the beginning of the series it does take it’s time. The first half of the series is very episodic with its cases. Psycho-Pass does not really hit it’s stride until about episode 10 or 11 when it is revealed that there is a mastermind behind these seemingly random crimes and he is dead set on exposing the Sibyl system’s cracks. This gives the series a single, overall story. But, the series is so well written that those first few episodes are not boring and do have a purpose. They establish the story of the show and the relationship between the characters. The build-up for the story really pays off, especially at the end of the series. Every reveal in the series speaks to something that was established earlier and brings the story full circle. It is well worth watching the cases in the beginning to reach the core of the story later. With the series being so structurally superb the ending was a little disappointing because it could have been so much better, but that is by no way saying the ending was bad.

In addition, there is a great supporting cast of other Inspectors and Enforcers who regularly work with the Akane and Kougami. All characters in the anime are compelling. Each one starts out as simple character with a single role and as the story develops they go though nice transformations that complements the story so well. Each give a different perspective on the societal issues explored in the anime.  As a whole each character has a very different of personality, as expected. However, that ensures there is character for almost anyone to like.

Psycho-Pass is entertaining and interesting. Psycho-Pass has very thought-provoking themes that were easily relatable: an advanced utopian in which humans rely on technology to a fault is an easy concept to grasp.  The series is bloody, violent, and can disturbing; but I cannot think of the last time I’ve enjoyed an anime this much. I can without a doubt say I was never bored for a single second in this series and each episode left me wanting for more. This anime experience a pretty amazing one and I would recommend that you watch it, if you already haven’t. Luckily this is not the end of the series, as Psycho-Pass 2 will air in October.