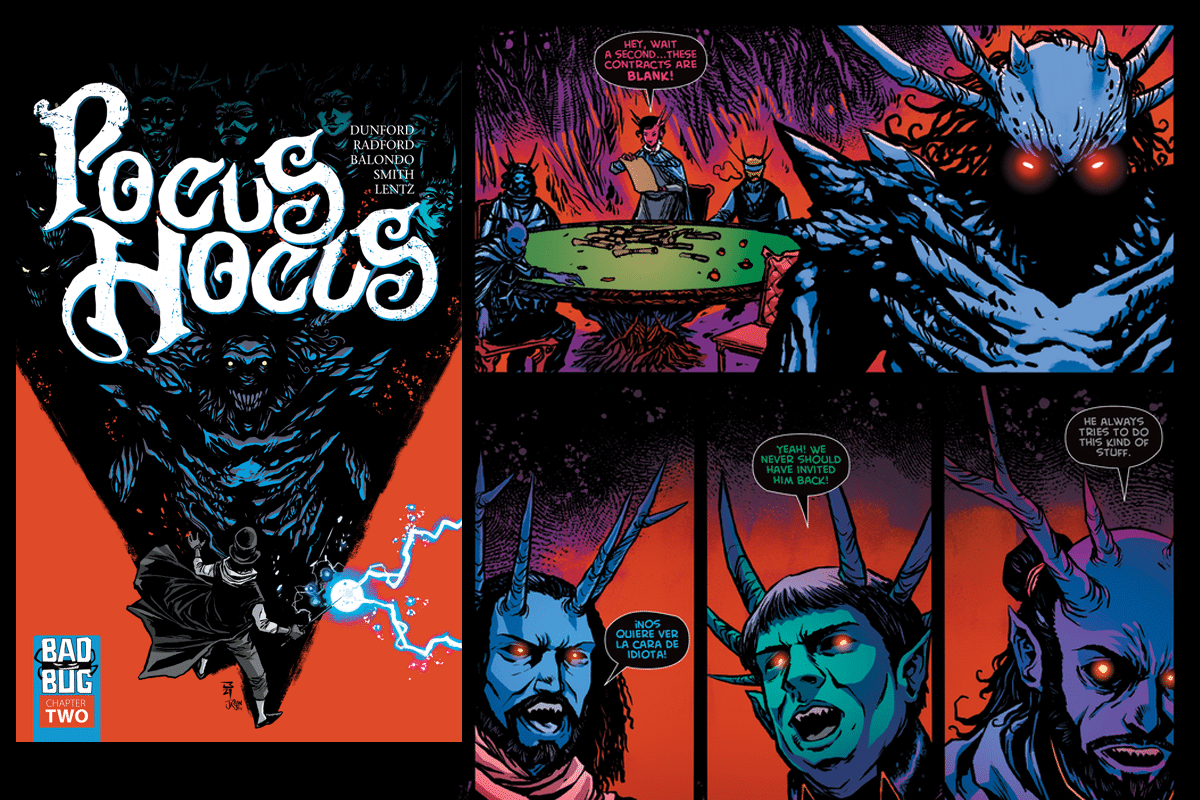 POCUS HOCUS is a dark magician story where magic is all too real. So real, it results in the protagonist making a pact with the devil. But what happens when this disillusioned magician wants his soul back?

Co-written by Allen Dunford and Will Radford, POCUS HOCUS is a hilarious Faustian tale which is part Death Note, part The Prestige, with a decadently delectable dash of Psycho Goreman thrown in the mix. With art by Brian Balondo, coloring by Jasen Smith and letting/design by Dave Lentz, the resulting look and feel is an extremely enjoyable comic book appealing to horror and fantasy fans in equal measures.

Pocus Hocus is as dumb as the name suggests…and it’s better for it! It’s self-awareness is its truest strength: it’s both disturbing and funny precisely where and when it intends to be. I’m in love with the vibrant colors of the supernatural world serving as a juxtaposition to the black-and-white real world that mirrors the bleak outlook of its protagonist. It’s as visually stunning as it is engagingly written.

The Indie Comics Scene are already weighing in.

WHAT OTHERS ARE SAYING ABOUT POCUS HOCUS:

“Pocus Hocus takes the classic ‘sell your soul to a demon in exchange for unlimited power’ formula and skips past the standard conventions, diving straight into silly and unexpected territory. Eat your heart out, Christopher Marlowe.” – Caleb Palmquist, Unicorn: Vampire Hunter, Modern Mythology

“An entertaining, well paced and humorous first chapter that sets up the promise of a demonic mystery with high stakes. I’ll be sticking around. I think you should as well.” – Ruben Romero, Illusion Witch, The Agency, Inferi

POCUS HOCUS Issues 1 and 2 are available on Kickstarter.