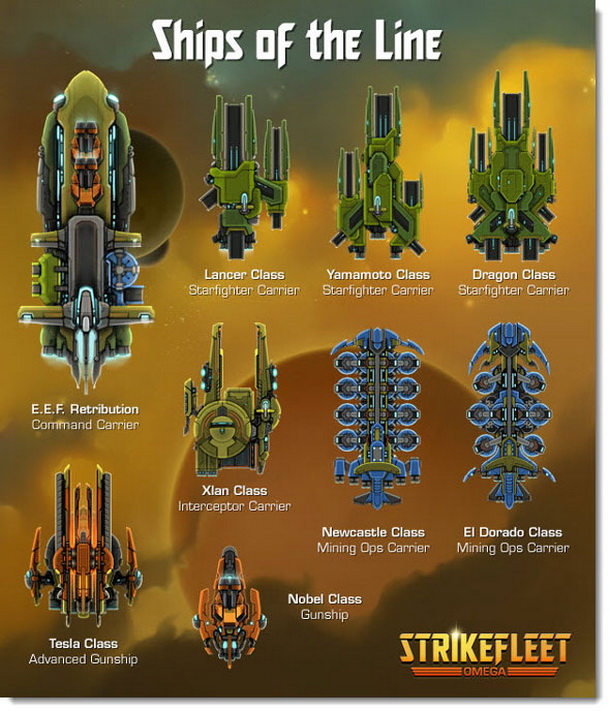 Are you a space junkie? If yes, then you must have played at least some games on this genre, such as Vega Trek, FTL etc. Today, I’ll use this space to talk about a space strategy game – Strikefleet Omega.

You will play the role of Admiral in the game, and its your duty to save the last capable fleet of humanity through The Earth Expeditionary Force. The Hive Queen has annihilated the earth, and your mission is to spot the queen and stop her from destroying the remaining colonies. You will wander from one galaxy to another while searching for the Hive Queen. In your path, you will have to fight and defeat marauders & enemy fighters. Don’t forget to collect the precious crystals to warp in reinforcements from the sole shipyard in the Armada, and build up your fleet. There are plenty of ships that you can command, and it’s important to have the correct combination for your fleet. Remember, each of these ships is different and thereby has different capabilities as well.

You will find two different modes named as Survival and Campaign. There are 14 levels in total in the Campaign mode, and after finishing all of those, you will be able to unlock the Survival mode. After launching the fleet initially and moving into the first of the star systems, you will be attacked by waves of enemy ships. However, defending yourself is pretty simple: tap and drag a path for the fighters and tap the screen to attack the enemies.

While beating the enemy down, you will gain crystals and those can be used to increase your strength. There are other materials to be stored as well, such as MegaCreds (this is the premium currency of the game) and Alloys. Your points will also fetch you some additional perks. More on MegaCreds now! These enrich your bank by only a few, as you progress through the levels. You can use these for any in-app purchase as well. If you are looking for a power up, you can again use MegaCreds for that purpose. Remember that Death Blossom is the most important weapon in the game, and you need to have that for dealing with the Hive Queen. Not only Death Blossom, but powerful starships will also be required for progressing through the game.

Controlling the fight path is easy as you need to do a simple drag across your phone screen. However, when you are supposed to create a strategy, things get a little difficult. To be a winner, you need to have the perfect combination of starships. So, while building your fleet, keep this point in mind. At times, you will notice that the accumulated alloys and MegaCreds are not good enough to buy the heavy duty ships (For example, an advanced mining ship for gathering crystals easily or the Lancer Class Starfighter Carrier). But, those are a must to move smoothly through the advanced levels, and you may sometimes need to go for the in-app purchases. Personally, I had to pay a few Dollars to complete the game, but I’m sure that won’t be the case for all gamers.

I loved the sound effects and graphics of the game. The best part is you can start playing Strikfleet Omega almost instantly; there is really no learning curve. I liked it and once you try this out, you will know that Strikfleet Omega is full of fun.