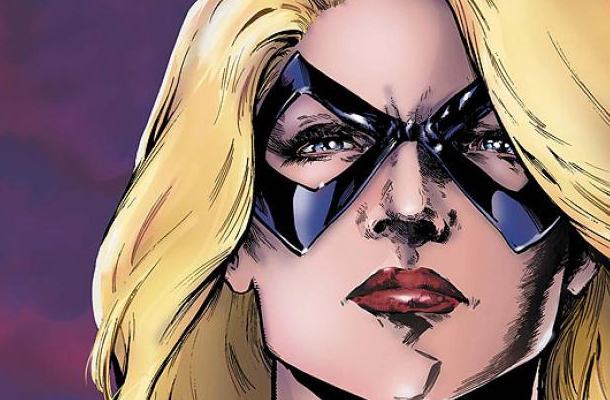 Although we may be told otherwise, there are still many major issues regarding equality between men and women in the Western world; issues which many would argue stem from a male dominated, misogynistic, global mass media industry. The comic book industry in particular is under almost constant scrutiny for its lack of female artists and writers, as well as for the high number of underdeveloped, overly sexualized female comic book characters it has generated over the years.

But nothing compares to Marvel’s treatment of female superhero Ms. Marvel in The Avengers #200; an issue that will be known as one of the most unintentionally offensive comic books of all time. An issue that contains the rape of Ms. Marvel.

Ms. Marvel’s Unexpected Pregnancy was Intended as a Marvel Celebration

It was during 1980 that Marvel writer David Michelinie and then Marvel editor-in-chief Jim Shooter were putting together plans for the monumental 200th issue of The Avengers and the equally monumental Marvel Universe event it would contain. It was decided early on that Ms. Marvel, who was at the time a fully fledged member of The Avengers under Michelinie’s direction, would become pregnant and have a baby. After discarding a few ideas as to who the father of the baby would be and under what circumstances Ms. Marvel would be come pregnant, Shooter finally decided on a storyline which he considered worthy of The Avengers #200.

The Avengers #200 starts off with Ms. Marvel mysteriously coming to the last phases of pregnancy after a mere three days. After being delivered by her fellow Avengers to Thor’s medically trained alter-ego Dr. Donald Blake, Ms. Marvel immediately goes into labour and effortlessly gives birth to a baby boy.

At this point Ms. Marvel is exhausted, confused and distraught from her unexpected ordeal, exclaiming that she’d “been used” and that the child “wasn’t my baby”, asking to be left alone from her bemused Avenger buddies. The child, however, grows at an extremely rapid rate and is soon a fully grown adult man who instantly falls in love with his own mother. It is at this point that The Avengers #200 goes from being slightly peculiar to downright twisted.

The Avengers #200: A Story of Manipulation, Abduction, Incest and Rape

The newly born man, who refers to himself as Marcus, reveals the story of his origin to revolve around long-time Avengers enemy Immortus, who was trapped within the alternate reality known as Limbo. At some point during his existence in Limbo, Immortus decided he needed to find a “mate” in order to produce a descendant. After building a dimensional rift between Limbo and our reality, Immortus plucked a woman from Earth who coincidentally looked like Carol Danvers a.k.a Ms. Marvel, manipulated her mind with his highly advanced thought control machines and impregnated her.

The resulting child from this unnamed lady’s forced conception was non-other than Marcus, who himself becomes trapped in the timeless interdimensional rift after his mother is transported back to Earth and his father suddenly disappears. However, Marcus comes up with an absolutely perverse plan that will allow him to escape Limbo and live on Earth; abduct a human women, impregnate her with his “essence”, return the woman to Earth, be born and grow into his current self.

Marcus proceeds to locate a host for his peculiar journey to Earth and finds it in Ms. Marvel, whom he finds himself attracted to due to her looking extremely similar to his own mother. Despite being the son of an Avengers nemesis, Marcus does at least try to woo Ms. Marvel the “old fashioned” way after abducting her.

But even Shakespearean sonnets and fine garments weren’t enough to get Ms.Marvel into Marcus’ bed, leaving him with “no choice” but to use Immortus’ mind control devices to manipulate Ms. Marvel into becoming sexually attracted to him. With Ms. Marvel’s mind in the palm of his hand, Marcus proceeds to have what can only be described as weird, interdimensional space sex with Ms. Marvel against her will.

Just like his father before him, Marcus abducts, manipulates and then rapes Ms. Marvel before putting her back on Earth with no memory of what had happened. To make matters worse, this all occurs within the pages of a comic book aimed primarily at children.

Of course, in most civilized societies Marcus would be branded a monster and most likely sentenced to a significant amount of time in prison for his heinous crime. But in the male dominated world of a 1980’s Marvel, no one seemed to realise that Marcus’ actions in The Avengers #200 could be considered offensive. But unfortunately, it gets much worse.

Due to originating from another dimension, Marcus’ presence on Earth results in a break down in space and time, resulting in dinosaurs and medieval knights appearing in New York which the remaining characters of The Avengers must battle. Marcus realizes this and decides that he must return to semi-Limbo, and his life of indefinite solitude, in order to save the planet.

In a disturbing twist, a teary-eyed Ms. Marvel appears and admits that the feelings she felt for Marcus while under the influences of his brain washing machines still lingers in her mind. The enjoyable, loving feeling she experienced while being raped combined with the confusing fact that Marcus is her her son are reason enough for Ms. Marvel to happily and willingly quit The Avengers and live out the rest of her life with her new found lover-rapist in semi-Limbo.

And not a single member of The Avengers tries to stop her.

Writer Chris Claremont and the X-Men Save Ms. Marvel

Luckily for Ms. Marvel, comic writer Chris Claremont restored the character’s shattered dignity in 1981’s Avengers Annual #10 in which Ms. Marvel is transported back to Earth after Marcus dies of accelerated old age. She is taken in by none other than the X-Men and, thanks to the efforts of Professor Xavier, regains full control of her mind and her memories. The Avengers turn up in an attempt to bring her back into their team only to have Ms. Marvel rightfully criticise them for their complete apathy towards her rape and for allowing her to be taken away by Marcus. Who knows what would happen to Ms. Marvel if this story would be written by the essay helper. It is possible we would see completely another ending.

Ms. Marvel’s rape in The Avengers #200 not only managed to get through Marvel’s editorial department, but also through America’s self regulating Comics Code Authority originally established to monitor the material presented to children in comic books. The comic was unsurprisingly condemned by the fandom, and many comic critics, including Carol A. Strickland in her influential essay “The Rape of Ms. Marvel”. Marvel’s nonchalant approach to rape, objectification, and sexual harassment to women in comics was astounding, and one can’t help but wonder if such misogynistic views still circulate amongst members of the comic book industry today.

In ‘The Killing Joke,” the infamous and perhaps somewhat depraved Alan Moore has Barbara/Batgirl and her father(Commissioner Gordon) not only beaten, tortured, and maimed, the Joker actually shoots Barbara in the spine and paralyzes her. Once she is helpless, Joker strips her down and rapes a helpless Batgirl. And he makes Gordon WATCH. However, apparently what made it into print wasn’t as graphic as Moore originally intended.

Back in the 1980s, palled around with Arisia, a 13-year old alien member of the Green Lantern Corps that he often refers to as “Little Sister.”

Arisia starts showing feelings towards fan favorite Green Lantern and starts flirting with him rather awkwardly, which Hal rebuffs and even gets onto her, explicitly pointing out the issue with her age. Arisia tries to tell him that on her planet she would be twice the age she is on Earth, but Hal doesn’t points out the maturity difference and rebuffs her again.

For a couple of issues anyway.

In Green Lantern Corps #206, Black Hand traps Hal and Arisia in a cave and suddenly, her ring appears to respond to her will to be grown up and transforms her body into a fully grown woman.

She claims it has matured her mind as well and tries to start something up with him but again, Hal rebuffs her advances and tells her he isn’t interested in starting anything with anyone at this point in time.

For a couple of panels anyway. 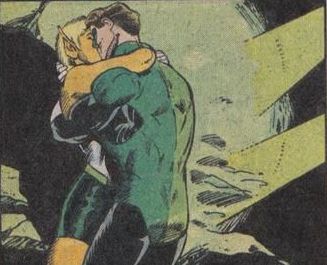 In GL Corps #207, DC tries to explain that because it’s love and her body and maturity were fast forwarded by the ring, it’s all okay. One Lantern points out that Arisia hasn’t had all the experiences of growing up but it is brushed off.

Hal even has a moment of self-reflection that should have told the writers to stop and rethink the whole idea.

Then…. Hal gives in and decides that he is above the law and to hell with how mature she is or isn’t.

They didn’t stay together long but the fact is, everyone that read these issues knows that Hal Jorden committed statutory rape.

Back to Marvel and – Incest

Ms. Marvel’s rape isn’t the only affront against women that Marvel is guilty of. Wanda Maximoff, aka Scarlet Witch, has become extremely popular since the Avengers‘ movies and the Disney+ limited series and if you saw either one, you know that her twin brother is Pietro, aka Quicksilver.

She doesn’t just die in Ultimates 3: Who Killed the Scarlet Witch, her and Pietro actually give in to some hidden desires and when they do, there’s a certain favorite hero watching.

The writers also decided that this issue was a great time to mention that there’s a sex tape of Tony Stark and Black Widow.

In the 2004 miniseries Identity Crisis, a pregnant Sue Dibnythe, Elongated Man’s wife, is found murdered and burned to death. Green Arrow, Black Canary, Hawkman, Zatanna, and The Atom, console her distraught husband and then tell him that the baby isn’t even his. Why? Because they covered up her rape. 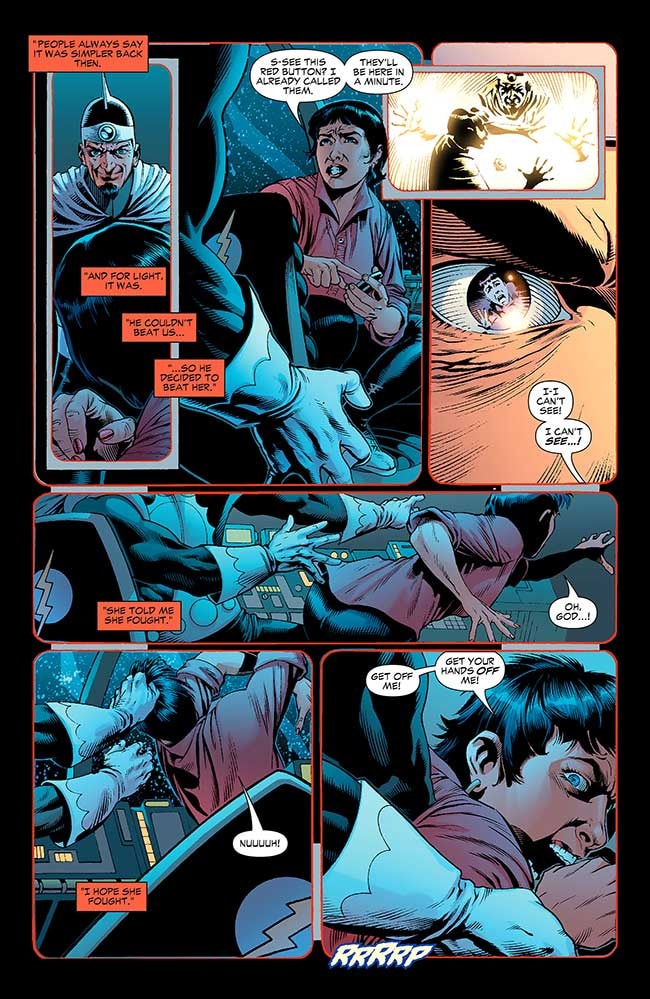 The Justice League members finally arrive and beat Dr. Light within an inch of his life and, being a bad guy, he uses his holographic powers to show them the rape. This horrific act is followed by his promises to find and rape Sue again and to do the same to all of the League’s loved ones.

So they put him in a super-max prison for super bad guys!

Just kidding. They decide to have Zatanna erase his and Sue’s memory of the incident and keep the entire thing a secret. 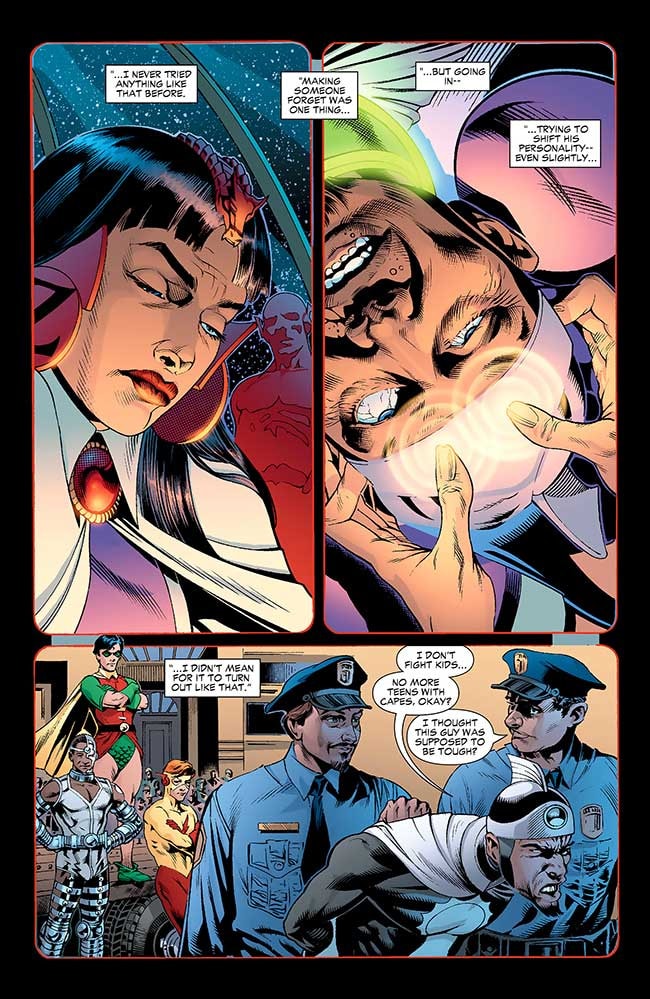 Unfortunately, Zatanna misses the mark and Dr Light makes it back to kill her.

Rape, incest, and statutory rape have no place in comics and the way women were treated in these storylines is abhorrent. I’d say “it’s safe to say that these storylines would never make it past the editors these days” but the fact is, they very well could because they never should have made it that far in the first place.

Sure, a lot of independent comics are geared specifically toward these kind of stories but they simply don’t belong in the mainstream titles that numerous kids read. And they damn sure don’t need to treat rape as a inconsequential act.

If you’re interested, you can read even more about other crazy sex stories in both Marvel and DC comics.