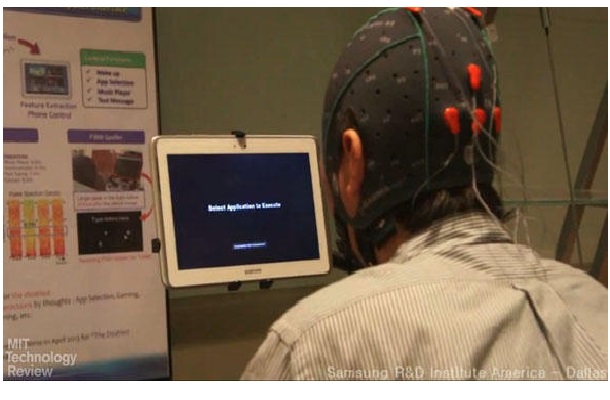 Enough of this obsolete touchscreen technology. Samsung has decided to take user input methods to the next level – mind control.

The Korean company is experimenting with a tablet that would perform actions courtesy mind-control from it users, according to a report in the MIT Technology Review. The aim is to expand the number of ways people can interact with gadgets.

The company’s Emerging Technology Lab is currently collaborating with the University of Texas, Dallas, testing the potential of mind-controlled input, by which users could use their thoughts to launch applications, turn devices on or off, or make calls.

Samsung has been involved in other non-touch input methods as well recently. Their latest flagship phone – the Galaxy S4, has functionality called “Smart scroll” and “Smart pause” that allows for users to scroll through pages and pause videos based on their eye movements.

For now, users need to wear a rather visually unappealing cap fitted with EEG electrodes that monitors your brain activity that is sent to the device. Samsung says users are able to make a selection once every 5 seconds, and is reporting an accuracy ranging around 80-95%. If these stats get better, it could only be the helmet stopping this technology from going mainstream.

Samsung has demonstrated a user using controlling a Galaxy Note Note 10.1 using the EEG cap, opening the music application and pausing music. The user could launch an app by concentrating on an icon that would blink at a certain frequency.

If this technology develops sufficiently, it has the potential to change the way we interact with our devices. It would be a boon for people with physical disabilities, and go a long way in expanding the smartphone’s reach to truly everyone.

It is nearly impossible to accurately predict what the future might bring, but given the broad support for initiatives such as the U.S. BRAIN initiative, improvements in man-machine interfaces seem inevitable” – Insoo Kim.

If only they could do something about that cap.