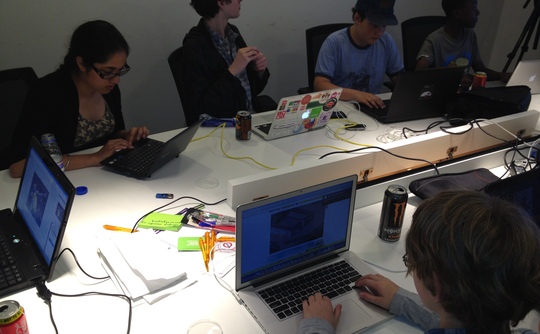 We’re forever being told about how hopeless the economy is right now, and how there’s less chances for employment and moving up the career ladders for young people than there are cars made of myrrh and unicorn ears. But for budding young computer programmers and coders, there is a national event that helps give a leg up into the industry. It’s given the imaginative title of the Festival of Code…which I’ll be honest sounds like a convention of the world’s best Morse Code decipherers. The reality however is even cooler – and harder to decipher for those not in the know.

Young Rewired State (YRS) launched The Festival of Code in 2009, and since then it has sparked a rapidly growing network of youthful designers and developers – all under the age of 18. I told you it was youthful. The goal of the Festival of Code is simple – to foster young programming talent and help give them the chance to open precious doorways into the programming, coding and development industry – one that is ever increasing in our new digital, technological age. In 2013 it’s speculated that around 1,000 young people will take part across 40+ centres around the country from the 5th to the 11th August – an impressive stat in just four years.

Part of this huge number of entrants is perhaps down to it’s format. The event runs over a week, with only the Friday to Sunday days being in a central location – the Custard Factory in Birmingham. The first part of the week takes place for entrants at a local centre, and for the first time Oldham will have it’s own centre at the University Campus Oldham. The free event will see under 18 techies and coders taking part in a series of design and coding challenges before getting a free trip to the big national gathering at the Custard Construction Facility, which will feature industry experts and grand final showcases of work. Working with professional programmers for the first four days of the event, youngsters will be introduced to sources of open data from the government and beyond, and will build prototype websites and apps. All very exciting, and the best kind of experience for young programmers – this kind of stuff is priceless. Ironic considering it’s free to register!

Oldham College Principal Alun Francis, who is supporting the event, says “Digital and creative industries are hugely important globally, nationally and to Greater Manchester. There is a particular shortage of skills to create content. This Festival is a fantastic chance for local young people to develop these skills in a fun way. It has not been run in Oldham before, but our partnership with Young Rewired State means that we are now part of a brilliant and fast growing project. This is one example of a number of new initiatives we are developing in the run up to our new £8m digital skills centre which opens in 2014, as part our commitment for Oldham to be competitive in the economic sectors which matter”.

If you’ve read all this and thought ‘this sounds awesome! I want some of that!’, signup is easy. The event is free and open to any young person under 18 (including transport and overnight accommodation in Birmingham) although some basic coding skills are required (obviously). For more information or to register, please visit www.youngrewiredstate.org. Places are limited. And if you’re in Oldham, you won’t have to go very far to get involved.