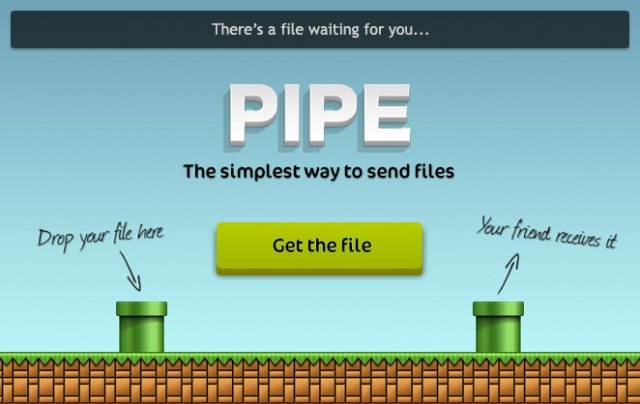 Facebook is taking file-transfer to a whole new level. A new Facebook app, called Pipe, rolls out today, and promises to make file transfer a whole lot easier on the social network.

Created by Pipe Dream Technologies, a Berlin based firm, the Pipe app will allow users to transfer files by simply dragging and dropping them into green tubes (which look almost exactly those green tubes from Mario). The intended Facebook friends of the user can then receive the files on their end. Even if they’re not online, or better, even if they don’t have the app.

What’s the difference, you’d ask? Facebook still lets you attach files in chat conversations. And with Dropbox integration in Facebook Groups, you can transfer files to multiple people at once. Why Pipe?

Size is one way to answer that. You can send big, big files over these pipes. Up to 1 GB, in fact.

The app has been in Beta stage for over a year now, and could only be tested via invitation. Pipe Dream spent this period ironing out bugs and glitches, and developing the app further.

There are more than a billion users on Facebook and there is no easy solution to transfer a file from one person to another,” Simon Howell, Chief Executive of Pipe says. “We’ve worked really hard to make Pipe this simple. We’ve made the technology invisible. It’s secure and private, and we’re confident it will catch on and spread fast.”

Pipe can be accessed via Facebook’s App Center, from where the user can select the friend to transfer a file to. Files can be dragged and dropped into the pipes to be sent. If the intended friend is offline, he or she will receive a notification informing them of the file. The file will stay in a “locker” until it is downloaded by the user. 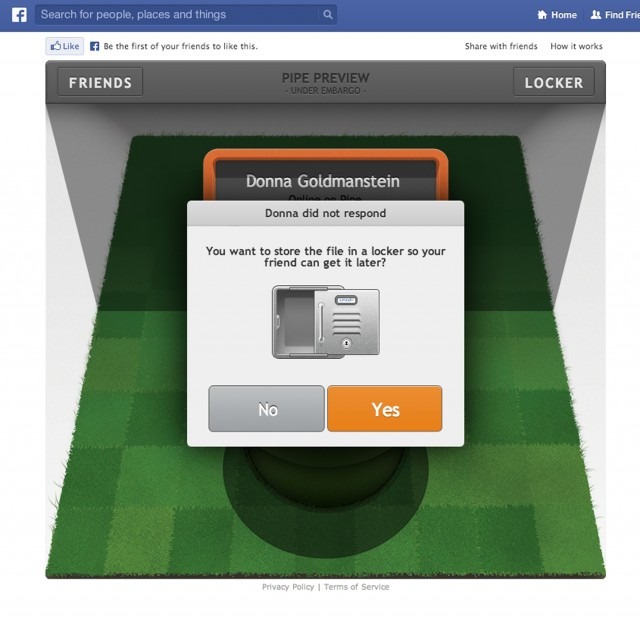 The locker can hold files of size up to 100MB – and will stay active for 5 days. The app isn’t launching to mobile devices yet – which is how more than 50% of Facebook users access the site. That doesn’t rule out the platform though. Mobile versions are said to be in the pipeline (pun unintended). An iOS version is almost ready and an Android version is expected soon.

The success of the app is something we’re going to have to wait and watch for. Facebook chat may not allow file transfers as big as Pipe, but should serve the needs of the majority of users. The rest, may already be comfortable with services like Dropbox and SkyDrive.

“We’re not suggesting people will be abandoning other ways to send files,” Hoswell says. “This is just such an easy way to send a file. You have access to everyone who’s close to you; you don’t even need to know their email address.”

Would you use Pipe? Let us know in the comments below.