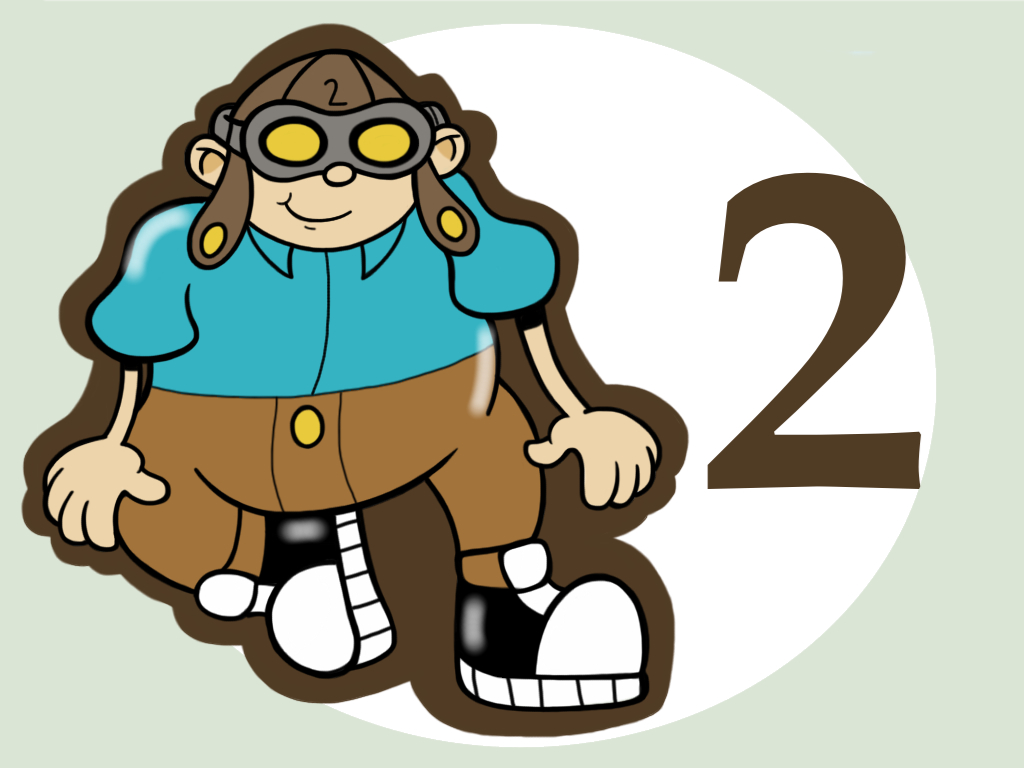 What is it about goggles that makes them so aesthetically pleasing?  They’re everywhere from cartoons to video games, to live-action movies.  They’re a staple of the Steampunk movement.  So, what’s the draw?  Is it that they cover up the forehead?  Is it that you can pull them down when things get serious?  Goggles today are often associated with the brainiac of a group, or maybe some kind of pilot who might need them for technical reasons.  Still, we find more often than not, the goggles are there for nothing more than to look cool.  And they do the job quite well, making those who wear them appear functional and fashionable all at once.  So without further ado, let’s do a run-down of the Top Ten Most Nostalgic Goggles. 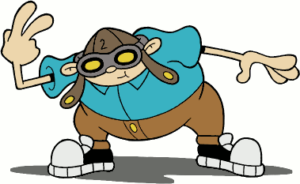 At the number ten slot are Numbuh 2’s goggles from Codename: Kids Next Door, which were so important to him that I don’t think we ever see his eyes.  For some reason none of the KND show their peepers in the first couple of episodes, being blocked by glasses, hair, a hat, and just being a stereotypically depicted asian.  But while each of the other characters gave us a glimpse of their eyes here and there, Numbuh 2 (a.k.a. Hoagie Gilligan) never removed his goggles once throughout the show’s run.  Maybe it was a symbol of how he was always ready to jump into the fray with a bad pun and a rubber band gun, or maybe he just thought it looked cool.  Either way you have to give props to a kid who wears his goggles proudly, day and night. 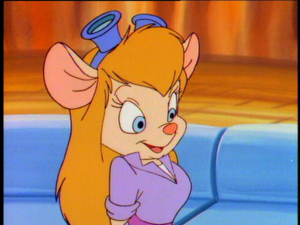 The techie mouse from Chip and Dale: Rescue Rangers has found a bit of a cult following in recent years.  Not only was she smart and resourceful, but she sure could pull off a pair of goggles. Even though Monterey Jack also wore goggles, Gadget is known for them.  They were a nice animated shorthand to let the viewers know she was an inventor.  Without them, she may have just been remembered as another damsel in distress, but those goggles were a constant reminder that this girl wasn’t afraid to get her hands dirty building some new contraption for the Rescue Rangers. 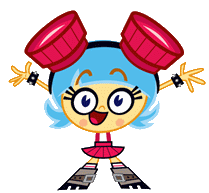 Frida’s goggles from the short lived Nickelodeon show, El Tigre may not be as well known as the last two entries, but they’re definitely more stylish.  They fall into the punk side of the goggle spectrum, dealing less with technical knowhow or actual necessity and more with just pure aesthetic coolness.  Frida’s personality is just like her goggles, she’s loud, a bit obnoxious, stylish, and doesn’t really care what you think, but functionally she’s pretty useless.  She’s a terrible influence on the titular hero/villain El Tigre, always convincing him to be selfish or greedy.  Because she loves to have fun.  And evil is fun.  Whether she’s rocking out with her band or cheering El Tigre on from the sidelines, Frida is always rocking her goggles and having fun doing it. 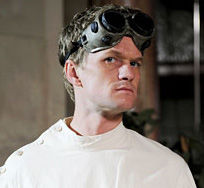 Joss Whedon’s budgetless super-villain musical, Doctor Horrible’s Sing-a-Long Blog was an instant classic among the nerdy and obsessive.  One of the truly impressive things about the film was how distinct the characters were even on such a small budget.  Neil Patrick Harris’s titular mad scientist is so instantly recognizable due in no small part to his iconic goggles.  They almost made him intimidating despite all the singing and that the fact that it was Doogie Howser under the get-up.  Horrible’s goggles were sinister, smart, and stylish.  Even with his Phd. in Horribleness, Dr. Horrible would be lost without his goggles. 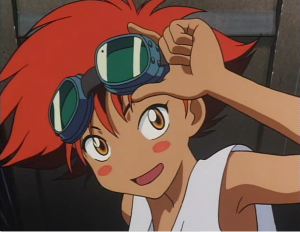 Cowboy Bebop’s mildly androgynous kid tech genius, Ed, is an eccentric sort.  She gesticulates wildly, speaks in broken english, and generally bounces around the screen like flubber. But she sure is good with computers.  Her goggles are actually a hacking interface of her own design that can remotely control satellites, spaceships, and all manner of computer-run technology.  These tech specs save the Bebop crew on several occasions.  And it’s pretty satisfying watching Ed giggle with glee while she flies a shuttle around like an RC helicopter. 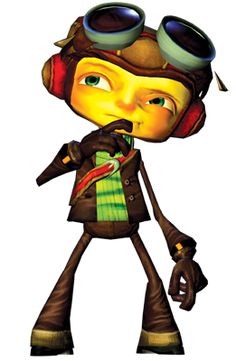 Razputin Aquato is the protagonist of the cult classic Game Cube game, Psychonauts.  This game involves jumping into peoples heads to fight their inner demons.  Whenever he uses his psychic powers such as telekinesis and clairvoyance, he lowers his signature goggles.  It’s not explained, but it could be some kind of conduit for his psychic powers to focus through.  More likely, it’s just something to make him look cool.  The goggles are the first thing you notice about Raz.  His face and brown color scheme are rather unassuming.  So it’s really the goggles that you remember years later.  Besides the stunning gameplay of course. 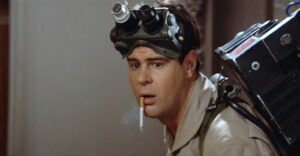 Ghostbusters. It’s a name that says “we do what we do.”  And when you do what the Ghostbusters do, namely bust ghosts, you need to have the gear.  Of course everyone knows the proton packs, but just as impressive are the  Ecto-Goggles.  These allow them to see ghosts.  Their clunky cobbled look adds to the retro tech aesthetic of the Ghostbusters franchise.  When there’s something strange in your neighborhood, you need the Ecto-Goggles to see it. 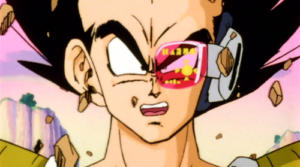 What’s his power level?  Well I’m not going to finish that old joke, but if you want to find out just get yourself a scouter.  While only technically a half a pair of goggles, this tiny device has a lot of power.  It can rate people on a scale, it can detect people nearby, it works as a communicator, and is basically a wearable computer.  This early ancestor of Google Glass is a perfect companion for any Super Saiyan. 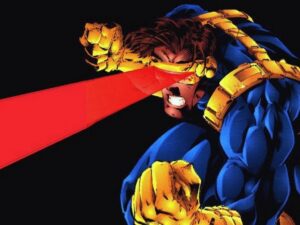 The leader of the X-Men has one of the most destructive mutant powers.  He continuously shoots lasers out of his eyes.  Were it not for his advanced visor, cyclops would destroy everything in his path.  He can not only stop the lasers, but control them, releasing just a bit of power at a time.  This is useful for when he needs to melt something without hurting people under or around it.  He can be delicate or decimate an enemy.  Cyclops’ goggles make him a formidable opponent instead of just a rampaging monster.

The Digimon franchise is the king of Goggles.  Its goggles denote leadership and main character status.  In fact, with one exception, every Digimon team captain gets a pair of goggles without any function and often without any discernible reason.  But it was so cool!  The ten year old in me wanted to wear goggles on my head every time I watched an episode.  They made the digidestined look so strong and seemed to make them better leaders.  Their fashion sense may have been extremely 90s, but those goggles stayed cool long after.  That’s why they are easily the most nostalgic goggles of all time.

So even though goggles can be extremely useful or completely pointless, they were an important and memorable part of the media we consume.  They can add a sense of intelligence, or confidence, or just insanity.  Even now goggles are appearing on Donatello in the new TMNT movie and on Tails in the new Sonic Boom TV show.  They will continue to be a part of our movies and shows as long as we remember them fondly by looking through our own nostalgia goggles.