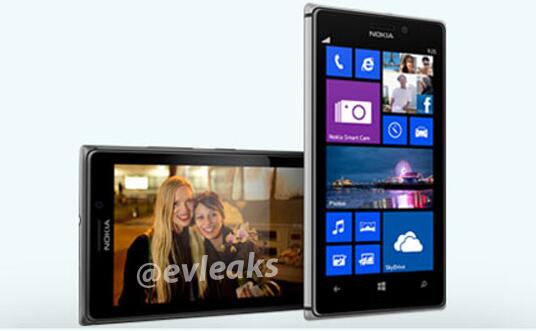 Just a while before Nokia’s Lumia launch event in London on May 14, pictures have surfaced of a new Lumia device – the Lumia 925. Like all previous leaks, Evleaks has posted these pictures online via Twitter.

The Lumia 925, codenamed ‘Catwalk’, is strongly rumored to be launching on May 14 in London.

The images show the Lumia 925 in landscape and portrait orientations, with the familiar Windows Phone 8 tiled homescreen. The 925 phone appears to be have a shiny aluminium or plastic frame, while top of the device appears to have a microphone jack.

Evleaks has also posted images of a sideview of the phone – indicating a power button, volume adjustment control, and another button that is most likely to be a dedicated camera button. The phone also has a slight hump for its camera lens area.

Evleaks, known for consistent and authentic leaks, had earlier recently leaked what could be the Motorola X, and before that – the Lumia 928 – which was launched recently.

Nokia is also rumored to be launching the first quad-core Windows Phone device, which is being called the Nokia EOS. The device is also expected to feature Nokia’s 41 megapixel PureView camera.

Nokia had earlier begun teasing a new Lumia device with adverts that indicated a phone with an all-aluminium body and  camera hump with a flash lens.
[youtube https://www.youtube.com/watch?v=mCD6VI5VmGE]