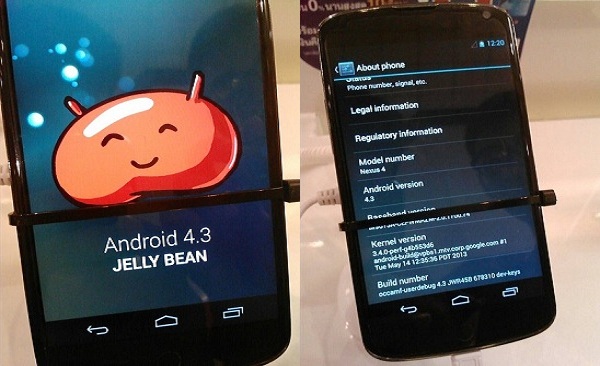 Pictures (and a video) of a Nexus 4 running the latest iteration of Android – Jellybean 4.3, have surfaced online. Could this mean we’re close to the actual launch for Android 4.3?

The pictures clearly indicate this particular Nexus 4 running Android 4.3, the build number being JWR45B. First uploaded on the xda-developers page for the device, the images were clicked at the Thailand Mobile Expo.

Android 4.3 has been speculated for quite some time now – with many websites having noted devices (like the Nexus 4 and the Nexus 7) running on the OS, in their server logs. There have also been rumors of Jellybean 4.3 releasing along with a ‘White Nexus’ sometime soon. This however, is the first look we’re getting at the OS.

The focus is on the camera aspects of the phone – with the pictures indicating new camera buttons which are no longer situated in a ring-formation, but instead grouped at one place over the shutter button when you tap the screen.

The fact that Android’s next version will be a ‘4.3’ instead of ‘5.0’ indicates that this time too, the changes in the upgrade would only be incremental, and that we shouldn’t be expecting anything big. Google however, in a press release during this year’s Google I/O, confirmed at least one addition to the update – support for Bluetooth 4.0 Smart Ready (more popularly known as Bluetooth Low Energy)

Additionally, we also have a short video of possibly the very same Nexus in action. Again, the focus is just on the camera app, so there’s nothing else we can see here. The video also shows us a countdown timer feature, part of the camera UI on Android 4.3.

The rumors floating around which suggest that the next version of Android would be showcased with the White Nexus suggest that the 4.3 update could be unveiled on June 10th. Interestingly, Apple is also holding a keynote on the very same day.