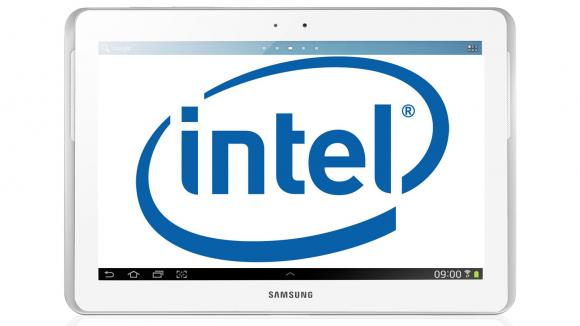 The Galaxy Tab 3 (10.1”) is the successor to Samsung’s Galaxy Tab 2, but unlike it’s predecessor, it will sport an Intel processor.

Galaxy Tab 3 has been a mystery so far, but some recent benchmark results have showed that Samsung is testing an Intel Atom chip for one of its upcoming Galaxy Tabs. Even though this sounds highly unlikely and bogus to a certain extent, it has been indicated by two different benchmark sites, giving it a little bit of credibility.

The Galaxy Tab line-up has not been as successful as its direct rival, iPad. Although, Samsung is not giving up hope. The Galaxy Tab 3 has been reportedly spotted running on an Intel Atom chip in a benchmark test result. Given Samsung’s popularity, this could be a great achievement for Intel in the mobile world.

GFX Bench collected some benchmark results from an app. The site spotted a benchmark result for a Samsung “Santos 103” tablet running Android OS on an Intel CloverTrail processor. Even though it hasn’t been confirmed, if this is in fact the Galaxy Tab 3 or possibly some other tablet that Samsung might have in store for us; all various details are pointing towards the Galaxy Tab 3 so far.

The benchmark results show that the tablet in question is running Android 4.2.2 Jelly Bean OS and sports a 1280 x 800p resolution display. The tablet has an Intel CloverTrail chip running under the hood with PowerVR 533 GPU. According to the benchmark, the tablet performs really well.

SamMobile on the other hand has also reported about the Galaxy Tab 3 spotted in a different benchmark test on AnTuTu app. This test showed the device attaining highest score ever in terms of overall performance for an Android tablet.

No matter how good this sounds for Intel, we are still surprised at Samsung’s decision to ditch its own chip for an Intel Atom chip. The Korean giant makes its own chips for its smartphones and tablets, so putting an Intel chip on a flagship device of the company just seems a bit odd.

If all the rumors are true and Samsung actually releases the Galaxy Tab 3 with Intel inside, then it’s definitely the biggest achievement for Intel in the mobile hardware business. The company powers millions of PCs around the world, but when it comes to the mobile world it lags behind its competitors. Intel already powers a couple of smartphones, but all of its hardware partners so far have been low or mid tier. A hardware tier like Samsung could prove to be a real benefit for the company. We shall wait and see if Samsung will actually go through with this, and put Intel chip inside its flagship tablet.

What are your thoughts on this decision by Samsung? Would you prefer buying an Intel powered Galaxy Tab 3?