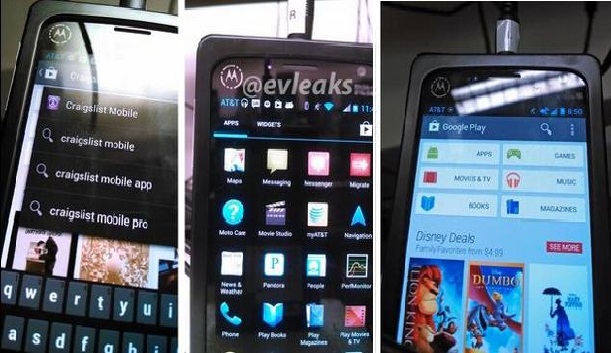 Serial leaker evleaks has done it again. A black-boxed Motorola device, said to be on its way to AT&T, has been leaked online.

Google CEO Eric Schmidt recently said that he had seen some of the ongoing development at Motorola and described their upcoming products as “very impressive”. He refused to comment on any of the rumors of Motorola’s X Phone.

The leaked phone seems to be running a stock version of Android, and is running on AT&T’s network. Motorola devices have stuck to Verizon for quite some time now – which makes this switch an unusual move.

Earlier this year, we had another Motorola leak by Tinh tế. It seems that both the leaks are of the same device – notice the earpiece position and back. The earlier leak suggested the following specs for the device – a Snapdragon S4 Pro processor, along with 2GB of RAM with an Adreno 320 chipset running the 4.65 inch screen. It would also feature a 720p display, with a pixel density of 320ppi.

Evleaks refers to the phone model as “XFON ATT” – could XFON refer to “X Phone” – Motorola’s much awaited upcoming flagship? While specifications leaked by Tinh Te earlier suggested a high end device, a display specification of just 720p seemed odd. It is possible that it may have been inaccurate, and both these leaks indeed refer to Motorola’s X Phone.

What is rather unusual is the difference in Motorola’s “M” logo in each of the 3 photos – an indicator that the images could possibly be of 3 different handsets.

Evleaks has also uploaded photos of the back of the phone – and they seem to match the photos of the earlier leak as well. The device seems to be encased in some protective covering, but the position of the camera lens and flash is the same.

It does look like this could be the X Phone we’re all waiting for.