Net Neutrality and Why We Should Care About It 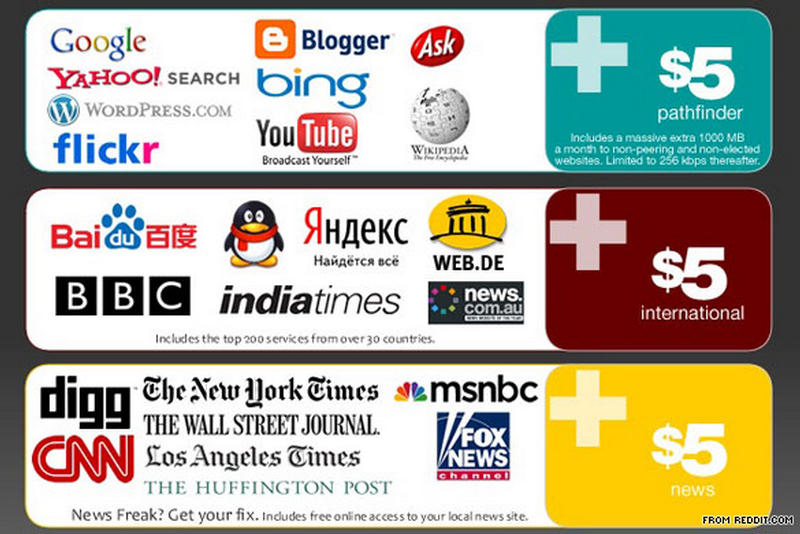 There’s quite a bit of hype going on across the internet world about internet neutrality and whether or not it will go away. For those of you who are unfamiliar with what is going on, please allow me to explain. On January 14th, a federal court of appeals struck down The Federal Communications Commision’s (FCC’s) open internet rules (more commonly known as “net neutrality”) because Internet Service Providers (ISPs) are not classified as common carriers. These net neutrality rules prohibited Internet providers to prioritize or block certain types of web traffic. In laymen’s terms, prior to the court ruling, your Internet provider could not charge you based on the types of sites you visited, they could not block any content on the web, and sites like Netflix or Facebook could not be charged for better service. With this new ruling, all of this is very likely to change.

Perhaps you’ve seen this picture floating around in the news today and wondered about it. After all, it seems odd that Internet providers would see fit to charge customers based on the sites they visit and charge companies for better services for their websites. This depiction is, admittedly, a worst-case scenario, but it still paints a rather unsettling picture of what could be our future on the Internet. Without net neutrality, ISPs would be free to act similarly to cable providers. That is, you would have to pay for access to certain types of sites. With net neutrality as the norm, Internet users pay for the service only and use it as they see fit. Supporters of net neutrality feel that with this tiered access to Internet service, only the very wealthy would be able to access the Internet in its entirety.

That’s not all. As I’ve said, without net neutrality ISPs will be able to charge sites such as Netflix and Facebook for better service. If these sites are being charged, the companies that own these sites will want to recover their losses. This could mean a number of possibilities ranging from increased advertisements (I shudder at the thought of commercials on Netflix) to increased charges for customers in exchange for access to a site (paying for Facebook). This, more than anything else, demonstrates the rather grim future potentially in store for the Internet and its users.

Fortunately, all is not lost. There is a petition available for anyone who wants to maintain net neutrality. The petition calls for the president to direct the FCC to classify ISPs as common carriers in order to maintain neutrality. It requires 100,000 signatures by February 14th. The future of the Internet and our access to it is at stake. What will you do?

Canvas Network Has the Perfect Course for Comic Fans