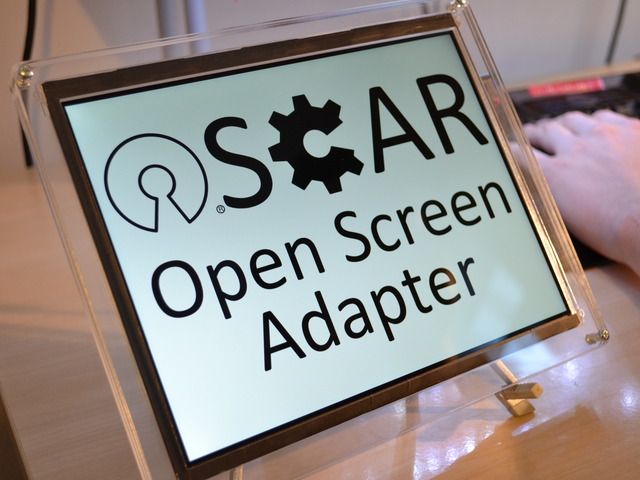 If you’re involved with video editing, digital art, coding, or just love PC gaming, you’ve probably experienced first hand how helpful having multiple screens can be. A bigger display means better multi-tasking, more desktop to work with, and easier access to multiple windows. You’ll also know how important it is for a screen’s quality to be high– whether you need it to show true color, to edit HD film, or to increase game immersion. Unfortunately, achieving a multi-screen setup requires a designated desk space. Multiple monitors, especially larger ones better for editing, art, and gaming, are heavy, cumbersome, and take up a lot of physical space.

Thanks to OSCAR, a cool new piece of technology, the accessibility and utility of multiple screens can now meet freedom of movement. Developed by hardware and software developers at University of Southampton and Imperial College London, OSCAR is an open screen adapter which can attach a portable, super high-resolution LED panel to your computer via a Thunderbolt or DisplayPort connection and offers a lightweight, easily-movable option for those interested in taking their multi-screen work or gaming setup on the road. The OSCAR PCB’s Kickstarter is currently a third of the way to its £15,000 goal. If funded, the project would go forward to preparing OSCAR for mass-production.

The developers have been very “open” about their support of and intention to make OSCAR’s software and hardware open source. When OSCAR goes into mass-production, the development team will be releasing OSCAR’s schematics, software, and board files. Kickstarter backers can get these schematics ahead of time, as well as the OSCAR PCB itself and, at higher levels, pre-built LED panels equipped with OSCAR. The LED panels are high-definition panels usually used in iPad 3 and iPad 4 tablets and provide a 9.7-inch screen that you can connect to your computer via OSCAR. This LED panel is a perfect extra screen for laptops and, with a pixel density of 264ppi, is perfect for color-sensitive editing and gaming on the go. The highest level backers will also receive a custom colored case for their new screen, made from white, black, red, orange, green, blue, light blue, violet, or white acrylic, instead of the normal clear case.

Would a portable option for multi-screen help you in your daily life? What sort of improvements to your display systems would OSCAR allow you to develop? Share your ideas with us in the comments.

Satechi Portable Humidifier: A Simple Remedy to That Pesky Cold

How to Creatively Use Your Instant Pot

Virtual Reality and Feeling the Music

Lumi Pamper is the Smart Diaper You Never...