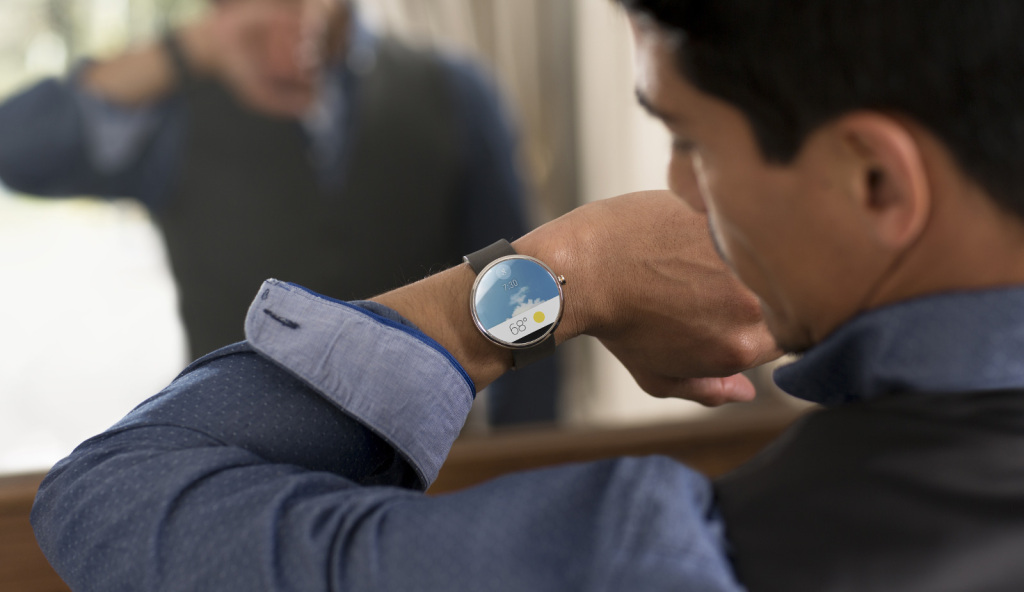 Fashion choice can personify you and how you and others visualize yourself. Often, accessories like your watch can be a symbol of class or elegance. Your wrist can even speak the language of an everyday intellectual, some watches are retrofitted with number pads for making calculations on the fly. In the recent years of modern technology great tech companies have found a way to mix the best of both worlds and managed to fit it all on your wrist. Fusing style with accessible functionality, Motorola has made its mark within the smartwatch division with their Moto 360 wonder. So, what time is it?

Just like in the movies, feel free to tip your undercover hat and whisper at your wrist, “it’s time to make a phone call.” That’s right folks, the Moto 360 features voice recognition features accompanying messaging apps along with your phone book. This brainy watch allows you to pair your smart phone so that any information sent can be easily displayed to your wrist, linking phone and watch hand in hand. Figuratively, of course. At first glance it may look like just a normal watch but that’s the beauty of it, the watch is far from regular and does well to keep that classic look and feel without projecting too much tech wizardry, it’s a bit minimalist in its outside appearance. Tap the Gorilla Glass screen and watch it come to life as it proves to be more than your everyday wrist bobbler with more than capable features. For added flavor you can switch between preset clock-faces and the company has provided more than enough bands to interchange with your watch, from thick to thin, leather to metal.

It’s an everyday companion just as a good watch should be, digging in the dirt so you don’t have to. While on the road or traveling long distance, the watch will give traffic alerts so whichever way you are going, is the right way. Speedy trips and efficient runs to work will be super easy,  the Moto 360 will tell you about expected rain and feel free to let the sun roof down as there is also weather synchronization coming to you when you need it. Use speech recognition to send text messages and even ask for directions, use GPS  functionality to find your neck of the woods when it counts.

If wheels aren’t your style the smart watch will also tell you about your arriving- or departing flight, let’s hope you get there in time. When you depart from the plane you can track your fitness with ‘Moto Body’. Moto Body tracks your steps, heartbeat, calories lost and even coaches you, “Want to set your calorie limit higher?” Isn’t that swell. Fitness aside, why even take your phone out of your pocket when this little helper has full app support. Respond to notifications on Facebook Messenger and crush a few minutes on Pinterest at the bank, entertainment couldn’t be closer.

Put Away the Gadgets- Time to Get a Watch

Smartwatches are without a doubt on the rise, Motorola’s Moto 360 does a fine job of selling itself as a worthy investment. The Moto 360 is water-resistant as well as wirelessly chargeable. Although there have been a few gripes on battery life, Motorola has improved the watch’s software so that it maintains charge longer, they addressed this many months ago to ensure that it lasts throughout your day.  As you can imagine all of the features don’t come cheap, this partner in crime will run you for $250-300. Maybe less off a partner than expected. However the price isn’t too bad, there are more expensive watches on the market for sure, and those watches won’t tell you where the nearest Dunkin’ Donuts is hiding. If you want a good smart watch that sports a premium feel, the Moto 360 may suit you well.

Along the rumor mill you may hear that Motorola is working on its next iteration of smartwatch. Will it be a Moto 360 predecessor or something with a new name, this so far has been only speculation. As more information rolls in and the watch is announced, we will keep you updated on what’s new. Until then, this watch will have you more than covered on the essentials with some added personality, the tech market is dense but you know quality when you see it.