Science has finally taken a step forward in the area of mind control! In the first ever human brain-brain communication, University of Washington scientists Rajesh Rao and Andrea Stocco combined powers to play a simple computer game. All they had to do was shoot down the target with Rao being able to see the screen and Stocco having control of the firing button. Of course there was no communication allowed between them aside from the brain-to-brain interface device on their heads.

The success to the mind meld experiment has shown the first proof of concept between humans. Similar experiments have been performed previously using rat to rat, and human to rat interfaces with success.

A press release described the experiment:

The team had a Skype connection set up so the two labs could coordinate, though neither Rao nor Stocco could see the Skype screens. Rao looked at a computer screen and played a simple video game with his mind. When he was supposed to fire a cannon at a target, he imagined moving his right hand (being careful not to actually move his hand), causing a cursor to hit the “fire” button. Almost instantaneously, Stocco, who wore noise-canceling earbuds and wasn’t looking at a computer screen, involuntarily moved his right index finger to push the space bar on the keyboard in front of him, as if firing the cannon. Stocco compared the feeling of his hand moving involuntarily to that of a nervous tic. 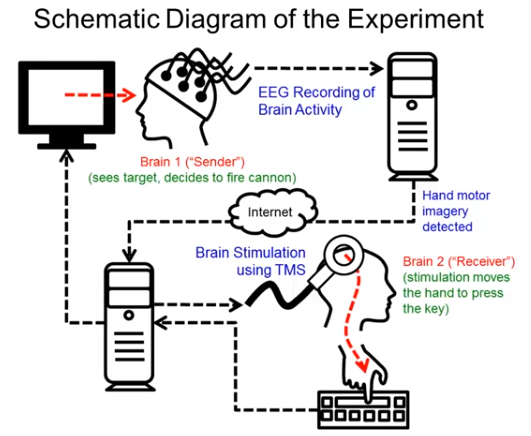 In order for the experiment to function, Rao had to spend time training his mind to work with the technology. When most of us think about moving our hand, we just end up moving it. Rao had to practice sending the intention of moving without ever actually taking the physical action.

This interesting little experiment is a big step forward for super villainy everywhere. Soon we’ll all need Magneto helmets that protect us from the prying mind powers of others. Or maybe not.