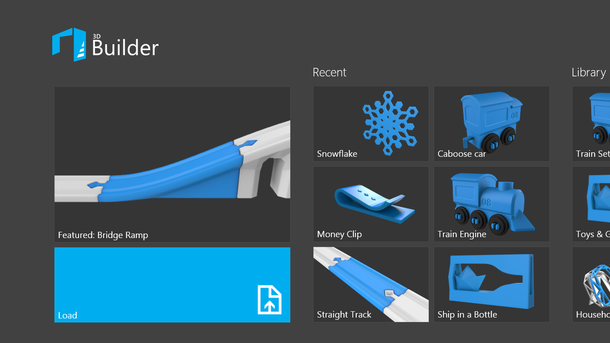 Seemingly in recognition of the soaring desire for (and recognition of) 3D printing, Microsoft have released a Window 8.1 application called 3D Builder which offers a basic design interface and includes some template models. Let’s consider it in the context of the numerous uses emerging for the technology, and imagine how widespread 3D printing might become in the near future.

When 3D printing–also known as additive manufacturing–was first demonstrated to the general public, it was difficult to say how it would progress. After all, many advanced technologies had been successfully produced before but had never proved practical or cost-effective enough to achieve mainstream viability. For a while now, though, it has been clear that 3D printing is not far at all from effecting a significant shift in the manufacturing industry.

That shift may be imminent. Stories have emerged thick and fast in recent weeks of numerous sectors praising the simplicity and unification provided by 3D printers. Medical business are already saving money and time printing “soft tissue prosthetics” using medical grade silicone. Car manufacturers are planning to shift production of small engine parts to the additive manufacturing process as it will allow them to store less inventory and fulfill orders on the fly. Custom clothing is already being made, and sports equipment is a natural fit given the existing reliance upon plastics.

3D printing may be booming, but there are plenty of problems that must be overcome before it becomes a regular occurrence. Primarily, while costs have come down somewhat, they are still beyond the reach of most consumers. For instance, most printers on the market cost at least $1000. MakerBot printers (the most commonly known) start at over $2000. Of course, while this would be enough to dissuade individuals simply looking for new toys, the amounts of money in question would be relatively acceptable investments for businesses. Does this mean the average fledgling design company should go ahead and pick up a printer? Unfortunately, significantly larger cost would be incurred by the materials required. MakerBot filament starts at $65 per kilogram, which is broadly in line with typical pricing, making it far more expensive than regular raw materials.

Other issues abound. Sizing is a problem, as it’s both time-consuming and difficult to make anything larger than what might fit into a small oven. Models tend to lack polish due to the nature of the process. Structural strength consistency is difficult to control.

But how can people realistically expect anything different at this point? There are currently a lot of printer models available working with different materials using different formats and methods, making the costs unsurprising. Just as the students at an educational institution or employees at a workplace might increase efficiency by sharing one printer, companies will come together to devise standards allowing for cheaper development. They will find a way to make it happen because the potential profit is immense.

Last month, a Kickstarter project for a 3D printer called the Peachy Printer was funded. The creators intend to sell it for only $100 with relatively cheap resin as the material. If this is any indication of what can be accomplished by those seeking to innovate, the next ten years may be transformative.

Windows 8.1 shipped with plug-and-play support for 3D printers, as well as a compatibility with relevant file formats, which makes Microsoft’s introduction of a design app a very logical step. They are even selling MakerBots at some of their retail stores, so it’s clear they are backing the technology in a big way.

Their software has been ubiquitous in office environments for a long time, but it may well bother them that artistic types have come to view Apple products as the default options for making songs and movies and other creative projects. Perhaps they think they can steal a march on Apple by pushing a Windows iteration on its promise of future-proof content production with the hope of snaring some unsuspecting users in their burgeoning ecosystem.

Even if the app doesn’t get much use, their support now implies further support in the future, putting them in a good position image-wise. We may also see a domino effect whereby their fellow software giants begin to add default support to their operating systems and develop tablet apps. I am certain of one thing: if devices like the Peachy Printer take off, there are some particularly interesting and exciting design lessons awaiting generations of schoolchildren.