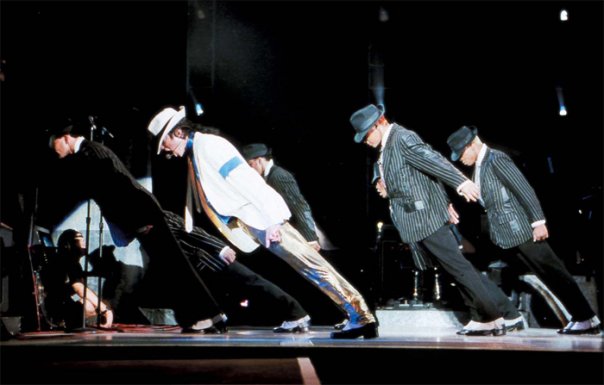 We all know the legendary Michael Jackson is a smooth criminal, leaving blood on the dance floor, but was he as smooth as we thought he was? Jackson has showcased his most memorable moves, such as the Thriller choreography and the remarkable moonwalk, in self-directed and self-choreographed videos (i.e. Thriller, in partnership with Michael Peters circa 1982). Although, he is notorious for his well-known choreography, this music icon has pulled the wool over all of our eyes by creating an illusion in this video, Smooth Criminal (1988).

In his video “Smooth Criminal”, Michael Jackson and his dancers lean at an angle far beyond their centers of gravity (CG). The trick is explained in the patent granted to Jackson and his collaborators. They were equipped with specially designed shoes with holes in the heels, with a wedge that could be hooked to a hitch in the floor.

The study of the dynamics of aircraft, vehicles and vessels assume that the system moves in near-earth gravity, and therefore, the terms center of gravity and center of mass are used interchangeably.

In physics the benefits of using the center of mass to model a mass distribution can be seen by considering the resultant of the gravity forces on a continuous body. Consider a body of volume V with density ρ(r) at each point r in the volume. In a parallel gravity field the force, f ,at each point r is given by,

Where dm is the mass at the point r, g is the acceleration of gravity, and k is a unit vector defining the vertical direction

Though many have tried to imitate Jackson’s famous anti-gravitational lean, it is nearly impossible without defying the laws of Physics. Of course, it would be a lot easier to watch the music videos repeatedly and mimicking the choreography from Beat It or Bad. The King of Pop, without a question, still reigns as one of the most important attributes to American music to this very day, but, every artist is allowed, at least, one secret; his secret just so happens to be a hitch in the floor to keep him from falling.