Deadpool 2 has been out for a while and by now you’ve probably seen it. With no third movie announced, it might be time to turn to the comics to fill your Deadpool cravings. Here are some of the best places to start. 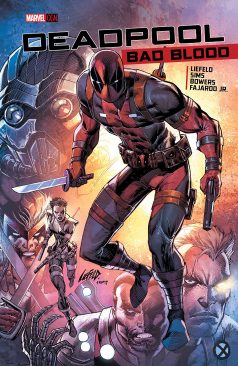 This stand-alone Original Graphic Novel is perfect for the casual Deadpool fan. Drawn and plotted by Deadpool’s co-creator Rob Liefeld (X-Force, Youngblood)  and scripted by Chris Sims and Chad Bowers (X-Men ’92, Guardians of the Galaxy). Wade Wilson keeps dying. An unknown monster keeps killing him again and again. He recruits Domino to help him find out exactly what is attacking and why. The answers lead back to X-Force, Weapon X, and his life before it all began.

Rob Liefeld is at the top of his game delivering cinematic action that’s sure to delight movie and comic fans alike. Featuring familiar characters from the movies and going into Deadpool’s comic book past, Bad Blood is a must read. A sequel, Badder Blood has been announced with no given release date.

Available digitally and in hardcover.

In 2012, as part of the Marvel Now! branding, the Deadpool ongoing series was relaunched by writers Brian Edmund Posehn (actor/comedian) and Gerry Duggan (Guardians of the Galaxy, Nova) and artist Tony Moore (Walking Dead, Venom). It introduces an entirely new supporting cast for Deadpool including Preston, a S.H.I.E.L.D. agent with her mind transferred into a Life Model Decoy, Ellie, Wade’s daughter, and real-life comedian Scott Adsit as an agent of S.H.I.E.L.D. In “The Gauntlet” Deadpool is hired by Dracula to gain possession of the coffin of Shiklah, queen of the underworld. After fearing monster civil war, they marry. That’s right, Wade Wilson ties the knot. 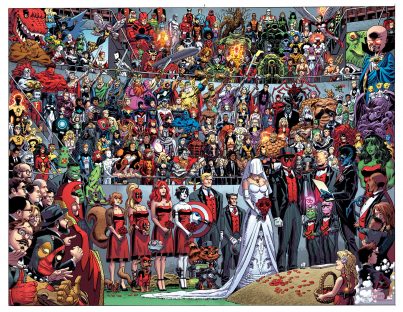 The series takes a very dark turn as it ramps up to “The Death of Deadpool.” This leads into the miniseries Mrs. Deadpool and the Howling Commandos. In this alternate universe, Deadpool died before he and Shiklah could tie the knot. She leads a squadron of monsters to steal a magical scepter and defeat Dracula. At this point, Duggan takes over as sole writer of the series.

After Secret Wars, Marvel rebooted again, but Duggan continued writing. The relaunched series, titled “World’s Greatest”, sees Deadpool as the most popular hero in the world. He assembles a team of franchised “Mercs for Money,” only to be betrayed by one of his own!

He also now funds the Uncanny Avengers out of his own personal gift shop. Duggan also writes Uncanny Avengers. While completely independent, it serves as a sister series to Deadpool. 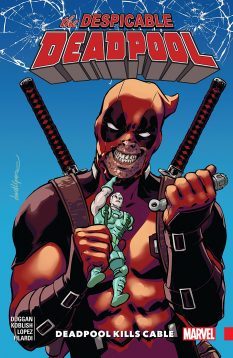 There are problems at home as Preston keeps Ellie away from Wade more and more fearing for her adopted daughter’s safety. Wade joins Hydra, believing it to be the only option in an increasingly messed up world.

The final phase of the run is The Despicable Deadpool where having seemingly lost everything, Deadpool turns back to the dark disturbed loner he once was. His first mission: Kill Cable.

The series just ended and the final volume will be available later this year. Right now, it’s available in digital, paperback, and the Duggan/Posehn run as an omnibus. 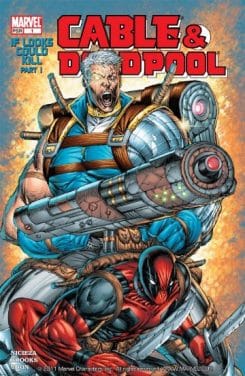 If you loved the movie’s take on Cable (and why wouldn’t you? Josh Brolin was great), then you should check out Cable and Deadpool. After a mission goes wrong, Deadpool and Cable’s DNA becomes linked. Anytime Cable teleports, Deadpool ends up with him. Cable goes global, starts his own country, and fancies himself a messiah, which seriously hampers Deadpool’s merc-ing.

Written by Deadpool’s other co-creator Fabian Nicieza (X-Force, Thunderbolts) with art by a whole list of superstars, it’s a really fun series that sees the duo fighting and teaming up with a number of Marvel universe name stays. Available in digital, paperback, and a hardcover omnibus.

Much of the first movie was based on Joe Kelly’s run on Deadpool. Kelly fleshed out the character and laid the groundwork for much of what makes Deadpool iconic (apart from the costume). His Deadpool was a morally grey antihero just as likely to torture his friends as he was to ask for help.

The first writer to work on Deadpool for an extended period of time, Kelly developed a complicated backstory for Deadpool that might have revealed him to have killed Wade Wilson and taken the name for himself.

Kelly returned in 2015 to write Spider-Man/Deadpool. This series, drawn by his Deadpool partner Ed McGuinness (Superman/Batman, The Incredible Hulk), teamed the two wise cracking, scarlet-clad heroes as Deadpool tries to become a true hero – by killing Peter Parker. Trouble ensues as they go to Hell, become gods, and fight their daughter (it’s complicated).

Available in paperback, digital, and omnibus.

Deadpool vs. X-Force is a fun romp perfect for anyone who loved the movie or was a comics fan in the 90’s.

Deadpool Kills the Marvel Universe is a perennial favorite and one of Marvel’s bestselling graphic novels. Pretty much stand-alone, it does exactly what it says on the tin. Driven to a hither unheard of level of violence, Deadpool decides to kill every super being on the planet.

Cable and Deadpool: Split Second is a great choice for fans of the second movie. Deadpool and Cable are stuck in a time look. Hilarity ensues as you’d assume. The digital version has very cool uses of the format including panel effects and transitions not in the print version.