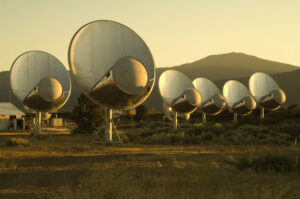 SETI (Search for Extraterrestrial Intelligence) was launched in May of 1999 and they continue their efforts strongly through 2013. Now you are most likely wondering what SETI is beyond their acronym, many are, because with a lack of funding their persistent project lacks public support. SETI’s goal since its inception is to find intelligent life outside of our planet. Above other trivial attempts and outlandish theories, this scientific search involves a technical approach with chartable data via radio SETI.

Radio SETI may be the distinct characteristic that brings unique purpose behind such a project. It’s the use of radio telescopes, with a look similar to a satellite dish, which detect narrow-bandwidth radio signals from outer space. These signals are not naturally created, meaning an occurrence of such gives indicated evidence of extraterrestrial technology. In further depth, radio telescopes interpret noises from celestial sources but also analyze the data digitally because the telescopes pick up man-made signals as well. Radar emitted sounds, satellites, and television stations can also fall into the scope of radio SETI. Although SETI@home plans to increase computing power to enable searches of greater frequency ranges while sensitive to narrower-bandwidth signals. But of course their increase in computing power is contingent upon an increase in funding or any supporting help for that matter.

Allow me to give a little background to the earlier processes in the search for alien intellect. Before the use of radio SETI, search projects have used supercomputers integrated in special telescopes with the purpose of data analysis. It wasn’t until David Gedye’s proposition in 1995 that brought a new method to such foreign investigation. Gedye offered using a virtual processor composed of a large quantity of computers which are internet connected, later known as radio SETI. What spurred from Gedye’s idea was the organization of the SETI@home project; with a newly invented technological search scientists hope to refine the efficiency of their exploration.

SETI@home has three major objectives for the near future and you could fall into the plans. RFI Rejection, their first planned endeavor, is rather vital because it would help SETI with the problem of filtering out earth originating signals. Radio Frequency Interference is the false positive signals that troubles SETI as of now. Further funding will allow them to create a RFI rejection algorithm, as well as increasing productivity of their multibeam receiver. Such will help SETI@home keep analysis focus on foreign radio signals. The most efficient time to filter data from RFI also falls into the equation, whether it is before signal research or filtering the data after research. SETI@Home’s next upcoming goal will be the creation of Multiple Frequency Observing.

Their present data recorder can “step” in frequency if the telescope is tracking a certain area. The concept is that there is a diminishing return from the data they have collected at the same frequency, in the same area. The telescope is not capable of properly handling a frequency stepping data set without the appropriate client application changes and the frontend and backend changes that SETI has yet to produce. They plan to conquer this problem with Multiple Frequency Observing.  The entire project of the extraterrestrial intelligence search may depend on SETI’s progression towards a higher bandwidth. Currently SETI@home pays a monthly fee for an “internet pipe” because Berkley’s campus cannot support the project’s high network bandwidth alone. Except because of the campus’s network capacity, SETI@home can only use 100 Mbits/sec of 1000 Mbits/sec of their internet pipe. 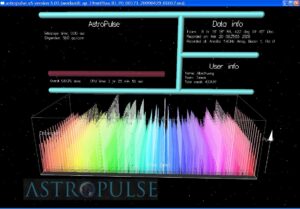 SETI@home’s savior, Astropulse, is a server that is creating more bandwidth demands. Now as you can imagine, SETI hopes to get more than just 100 Mbits/sec on their internet pipe which would then increase their bandwidth. Berkley’s campus is backing SETI through research and intelligence. Berkley works closely with the SETI team, trying to find hardware needed to lessen the lasting network problems. But don’t think SETI won’t accept our assistance as well. SETI@home doesn’t just allow us to contribute monetarily. The project hopes to convince you to allow them to use your computer when not in use to help in their search. They’ll do this with a screen saver that will replicate the actions of SETI@home’s data retrieval and analysis, and then report the results back to them. On SETI@home’s end they are in the process of building an underground fiber through the campus to connect to their remote locations; all of this falls into their needed upgrade costs.

Regardless of the impact of your donations you must put forth the effort because you will be supporting a pioneer of our generation and generations after. SETI@home leads our intelligence in data analysis while putting it towards a useful cause. They hope that we see their purpose and support the advancement of SETI until they reach their goal.