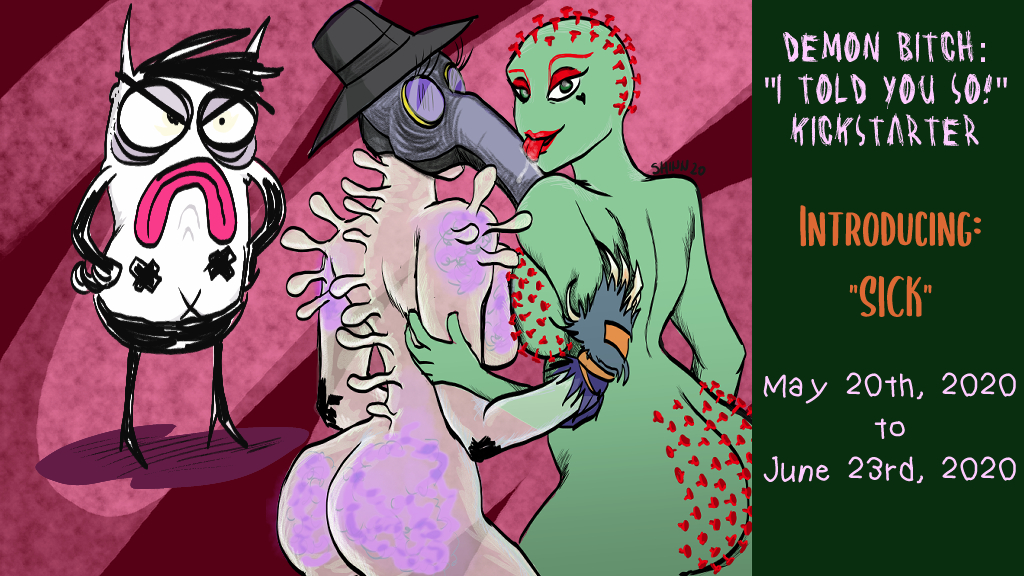 Christie Shinn is an artist, illustrator and livestreamer who has brought Demon Bitch to life and turns ugly, hateful mean people into grotesque caricatures because WHY NOT? She saw a CAT scan of the mass on her pancreas, saw tits and called it Casey Anthony.

Ah, the warped mind of Christie Shinn… She’s wide awake and doesn’t care what you think about her because a health scare that could have been a death sentence has given her a new perspective on life.

Some people will look at Demon Bitch and think it’s an offensive train wreck but what do you expect from a demon?

Christie Shinn is a comic artist, illustrator and writer. She is the head of Hora Tora Studios and resident artist at the Hive Gallery in Los Angeles. Christie also hosts Lunch Hour from Monday through Friday on Twitch, YouTube and Facebook Live.

She does commissioned and sequential art for other writers and you may have seen some of Christie’s articles on BuzzFeed too.

Some of her titles include: “Personal Monsters: A Compendium of Monstrosities of Personality” and “Sepulchre” and she has done commissioned and sequential art in titles by other authors. Additionally, she maintains a Patreon page where a new Demon Bitch comic is released weekly.

I had the pleasure of sitting with Christie Shinn in a casual interview for Lady Geek LIVE on Sunday, June 7, 2020. Christie is very candid about family dynamics and her health scare. We also talked about her art, the genesis of Demon Bitch, and why her “I TOLD YOU SO” Kickstarter is important. More on that later.

Getting to Know Christie Shinn

Why Some Kickstarters are Important

If you’ve been keeping Kickstarters at arm’s length because you think they’re scams and money grabs, I won’t dispute the fact it happens on occasion. That’s why it’s important to vet the people you want to support. Do they have a history of delivering or did they take the money and run?

Certainly there are some who do that and they quickly inherit a well-deserved bad reputation. Not Christie.

Before I sat with Christie Shinn, I wanted to make sure she was legit. She has a few successful campaigns and a growing list of print art, books, pins and other swag. My favorite is probably DEMON BITCH YOUR EX, where she’ll Photoshop that adorably grotesque demon (and maybe some of her friends) over your ex because you love that picture but you hate the jerk.

This campaign ends on June 23, 2020 and it’s not an ego trip or money grab. Christie has included the art of many artists and the raised funds pay the artists, printers, distributors, postage and a few other things after fees are taken out.

If you’re not familiar with Kickstarter, it’s all or nothing and every dollar counts because it goes toward goal but the amount of supporters also helps get recognized as Projects We Love. If Christie doesn’t reach goal, no one gets paid… and that would be really sh*tty.

No one wants to take your last dollar either. If you cannot pledge to your favorites, you can hit the like and share button.