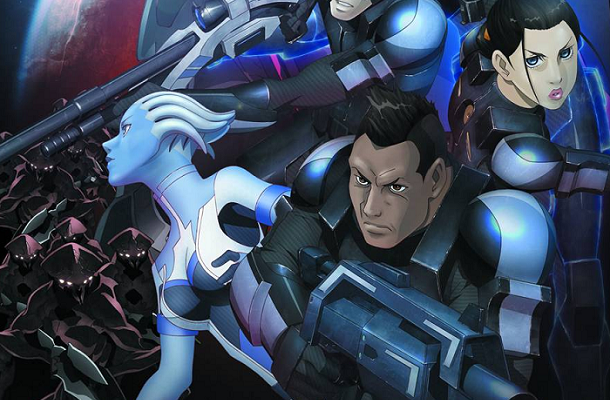 Mass Effect is a series known for its well developed characters, engaging dialogue and expansive universe containing numerous sentient beings and imaginative locations. Considering that the Mass Effect series not only includes the video games but also comic books and novels, a feature length animated film would seem like the next logical step. Mass Effect: Paragon Lost is that animated film, but is it worthy to carry the Mass Effect name? Read on to find out.

Has the Mass Effect series lost its way?

‘Mass Effect: Paragon Lost’ focuses on the story of James Vega, a character that joins Commander Shepard during Mass Effect 3. The choice of Vega surprised fans when it was announced late last year due to his uninteresting character and back story which has resulted in him being one of the least popular characters in the series. Nevertheless, Mass Effect: Paragon Lost presented the opportunity to give Vega some much needed characterization and depth. But did producer, Funimation, take advantage of this opportunity?

In short, the answer is a firm no. Mass Effect: Paragon Lost tells the story of Vega and his forgettable band of stereotypical space marines on a mission to protect the human Alliance colony on Fehl Prime from a group of Krogan Blood Pact. After defeating the alien assault, Vega and the gang are put on guard detail until two years later when a mysterious race of insectoids paralyses and abduct the colony’s inhabitants.

If the previous paragraph made no sense to you then you’re unlikely to have played the Mass Effect games and are therefore unlikely to watch this film. Conversely, Mass Effect fans will already be familiar with the described events and are unlikely to find the film engaging. Herein lies one of Mass Effect: Paragon Lost’s greatest flaws; it attempts to please both fans and newcomers at the same time. Awkward lines of dialogue explaining the many key aspects of the Mass Effect world has been shoehorned in, while nothing new or interesting is added. In fact, those who played Mass Effect 3 will have already heard Vega tell the very same story covered by the film.

The voice acting is another cause for concern. Freddie Prinze, Jr. reprises his role as James Vega but gives a disappointingly lackluster performance and almost the entirety of the rest of the voice acting is wooden and cheesy. Many lines of dialogue are spoken in such a rush that they sound like they’ve come straight from an 80’s dub of a Japanese anime, which is inexcusable for a 21st century production made for an English audience.

The animation was, surprisingly, handled by Production I.G, a Japanese animation studio famous for its work on the Ghost in the Shell and Patlabor series as well as Blood: The Last Vampire. It’s impossible to think that the studio responsible for such well regarded anime classics would be responsible for animation as poor as that seen in Mass Effect: Paragon Lost. Characters are often drawn out of perspective and inconsistently change size and shape throughout the film. Scenes where characters move quickly are just as cringe-worthy, as is the use of CGI which truly looks as though it was rendered in 1998. On the plus side the animation is clean, crisp and colorful.

The liberal use of deus ex machina muddies the plot

The pacing of the film is rapid to a point where its difficult to keep up. Unfortunately it’s also difficult to care as the film’s over dependence of clichés, cliff hangers and deus ex machina make it all too predictable. Additionally, the rapid pacing combined with the high speed of the dialogue completely destroys the tension the film tries to generate in numerous scenes.

Mass Effect: Paragon Lost does take an interesting turn in one of its final scenes where Vega must make a difficult choice that won’t be disclosed here. This scene in particular reflects to an eerie extent the difficult and permanent choices the player must make in the Mass Effect games as Commander Shepard. This is also the only scene where any character development occurs as Vega desperately tries to decide what his hero Shepard would do in his situation, believing Shepard to have the ability to save everyone. His decision has not only a permanent affect on those lives he’s attempting to save, but also his own.

Ultimately Mass Effect: Paragon Lost is a poor attempt by Funimation to create what could have been a prominent piece of Mass Effect lore. Their efforts to make a film that would appeal to both Mass Effect fans and newcomers is nothing short of bewildering considering Mass Effect fans are the only ones likely to watch it. Unfortunately, all that fans have to look forward to is a poorly animated retelling of a story they’ve already heard in Mass Effect 3, and practically experienced in Mass Effect 2. A disappointing film that should be avoided by fans and non-fans alike.

Mass Effect: Paragon Lost is out now on DVD and Blu-ray.