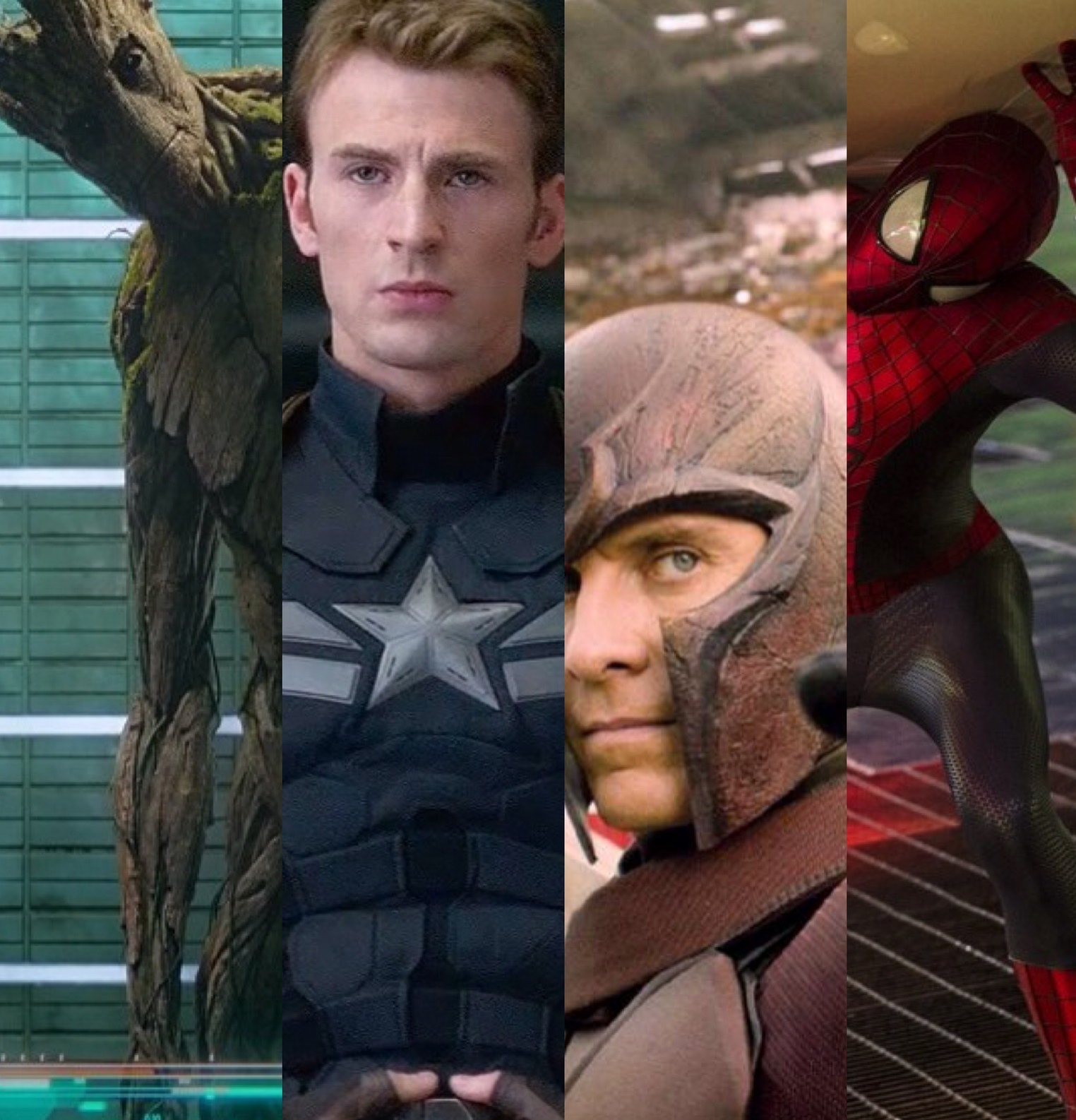 Well, the superhero haul for the year is officially over and while DC was MIA on the silver screen (but currently shoving Marvel on the TV playground), Marvel and their long lost properties from other studios saw great success this year with four new additions: Captain America: The Winter Soldier, The Amazing Spiderman 2, X-Men: Days of Future Past, and Guardians of the Galaxy. Due to each film certainly has their strong points and massive following, it’s challenging to place them in a hierarchal order of best to worst (well, three of them at least). Each has a defining tone and style, and whether you preferred the adventure political thriller mash up of Captain America, the space opera oddball comedy that was in Guardians, the time travel 70’s piece/dystopian future of X-Men, or the CG overload romantic comedy masquerading as Spiderman, it seems that ultimately we’re making a list of favorites. Let’s take a closer look at each to determine which Marvel property was the 2014 champ.

One would figure that Marvel’s flagship character would’ve struck gold from the long awaited first installment, but the end consensus was more…meh. Then while Steve commanded more screen time than his fellow costars, much of the audiences favored the wit of Tony Stark and unforeseen humor of Hulk over the unmoved valor of Captain America. Then in a surprise twist of fate, with much help from the talented Russo Brothers, The Winter Soldier showed the world the Captain America we’ve all been missing. Combining the best fight choreography seen in superhero films with a layered plot CA: TWS ranked up an impressive 70 metascore and amassed nearly $400 million. While the film opened a month before summer (imagine a 4th of July opening) the opening weekend was only surpassed by later films Transformers: Age of Extinction and Guardians of the Galaxy. In an era of superficial superpowers, Captain America gave the superhero genre a much needed human soul.

Possibly the most disliked entry to the entire franchise, Marc Webb’s Spiderman sequel had its strong moments. In a genre that popularly repeats the damsel in distress routine, Webb broke the mold by empowering Emma Stone’s Gwen Stacy. Proving to be more than a pretty face, Gwen Stacy was yet again instrumental to Spidey’s victory, showing that he most likely needed her more than she needed him. The onscreen chemistry was apparent in this film, but indeed indebted to their off screen romance. And again I’ll state that Gwen’s fateful plunge showcased Webb’s dramatic vision that was sorely missed for the rest of the film (which explains the disappointing 53 metascore). Whether you loved or hated it, Spiderman’s wit and humor shows that you can’t keep a good superhero down.

X-Men: Days of Future Past

Bryan Singer’s return to the director’s chair for X-Men: Days of Future Past was much appreciated by the diehard fan base and the general audience. With a solid 74 metascore, Fox’s latest X-Men installment has in his comeback out grossed all other films in the franchise to date and even set the stage for an even bigger adventure slotted for 2016. In the latest strange prequel/sequel crossover, fan favorites from the original trilogy and Vaughn helmed reboot collided and carried the film with superb chemistry. Among the best scenes always involved a Professor/Magneto exchange, from the intense interaction on the plane to McKellen’s final breath in the third act. Much like the era of government information and observation displayed in The Winter Soldier, DOFP reflection on cultural shifts elevates the genre to be respected by mature audiences.

Guardians of the Galaxy

By now we all know the story. Marvel, after the explosive success from the Avengers, sought to go off the deep end with the expensive sci-fi adventure Guardians of the Galaxy. Investing in characters no one really knew and crossing over into a genre that no one really appreciated, Marvel risked the future of their namesake. But of course GOTG proved to be not only an enjoyable film but one loved for its quirkiness. With an impressive 76 metascore, the Guardians have in their late release dominated the domestic box office and in route to surpass all others this year worldwide. James Gunn, who before had directed films with next to nothing budgets compared to GOTG, is indeed the key factor to the film’s success due to his colorful imagination. With a stellar cast to back him up, it’s hard to find a favorite among a team of equally loved characters. Forget the franchise, a mother@#$%ing star was born when this film came to life.

As far as which film this year was the best, the numbers do not lie. Guardians of the Galaxy has by the dollars of audiences and the words of critics proven to be the 2014 Marvel Movie Champ, with Captain America: The Winter Soldier coming in slightly behind still fighting for first. Days of Future Past for all its strengths still divided audiences and Spiderman proves that one is the loneliest number, but these are just statistical findings. My personal list sees The Winter Soldier at the top, followed closely by Guardians, then X-Men at third, and Spiderman at a distant fourth. Which 2014 Marvel film do you feel was the best and worst?