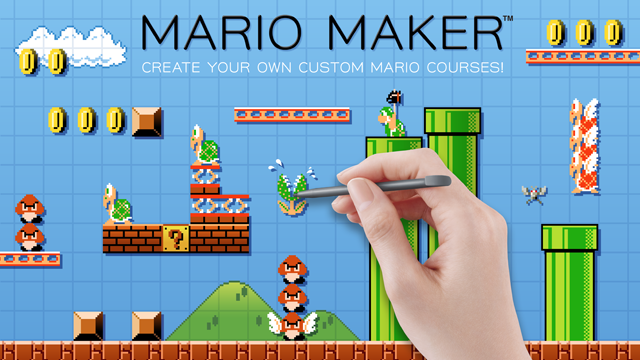 Growing Up With Mario Paint

I remember when I was a child and I received my first video game console…a Super Nintendo…and my life went downhill ever since. Okay, all jokes aside, it was not long after that when a game was released entitled Mario Paint. Being that I was—and still am—rather creative in my younger years, I thought that this was a really neat idea. Keep in mind, this was back before Photoshop and even home computers were extremely popular, and so to be able to draw something and see it visualized on a television screen was quite remarkable back then.

Not only that, but the game came bundled with a mouse; the computer kind…not a living mammal. It was one of the few official peripherals released by Nintendo for the system and it helped to allow more precise drawing movements. The game itself featured the ability to obviously create art, but it also had a mode that allowed you to create music with various sound bits. In fact, many people still use the unofficially named “Mario Paint Composer” to this day as a simple YouTube search for “Mario Paint” will result in plenty of videos featuring the musical creations of countless individuals.

Needless to say, the game was innovative for the time allowing for endless hours of creativity and I can speak from personal experience when I say it made you feel like a star. What I mean by that is that it genuinely was unique to be able to design something using your Super Nintendo, have it displayed on screen, and then be able to show it off to your family or friends. I guess you could say that it felt as though you had your own 16-bit art show in the palm of your hands.

Shifting back to present-day, it was recently announced that a similar game of sorts would be released for Nintendo aptly titled Mario Maker. What exactly does that have to do with Mario Paint though? Well despite the fact that their functionality and purpose are similar to a degree, the game itself was originally intended to be an official sequel to Mario Paint before shifting to another direction.

While you can check out the full story here, Takashi Tezuka—a video game designer for Nintendo—had this to say about Mario Maker: “So what I particularly like about Mario Paint is that it’s not just about drawing. It’s playing with the software itself and having fun with it as you draw. So I wanted to take those fun, clever little things from Mario Paint and implement them in Mario Maker, so it’s a lot more than just a course editor.”

Below is a video you can look at which shows off the game and some of its features.

In short, it basically plays out exactly like it sounds…you create and design your own Mario courses. Making courses is easy, thanks to design and functionality of the GamePad; much like the mouse peripheral for Mario Paint. By simply using the touch screen, you can finally draw in that whacky course that involves a dozen nearly impossible Koopa air-bounces in a row to reach the end.

Adding an even more unique and fun twist to things is that once you’ve finished plotting, planning, and scheming your devilish masterpiece, you can torture your friends by having them play through it from start to finish. If you notice a spot that didn’t quite work out right, you can go back and touch things up to your satisfaction. Even better? The final icing on the cake is you can switch from traditional 8-bit graphics to the newer high-resolution HD graphics in the style of the New Super Mario Bros. U game!

Whether or not this will be a disc-based release or simply a download on the Nintendo eShop has yet to be announced, but regardless of that, if you feel like unleashing your creativity, then this should be a “no brainer” when it comes to purchasing. For those of us who have been longing for a sequel to Mario Paint, for the time being—and perhaps for good—it seems as though this will be as close as it gets. If you read this article, you’ll see where Tezuka states: “We think this is a game that will showcase people’s sense of imagination.” If that was Nintendo’s primary objective, then I’d say they succeeded in reaching that goal. Here’s hoping that there will be a way to share and play through people’s custom courses online from around the globe!