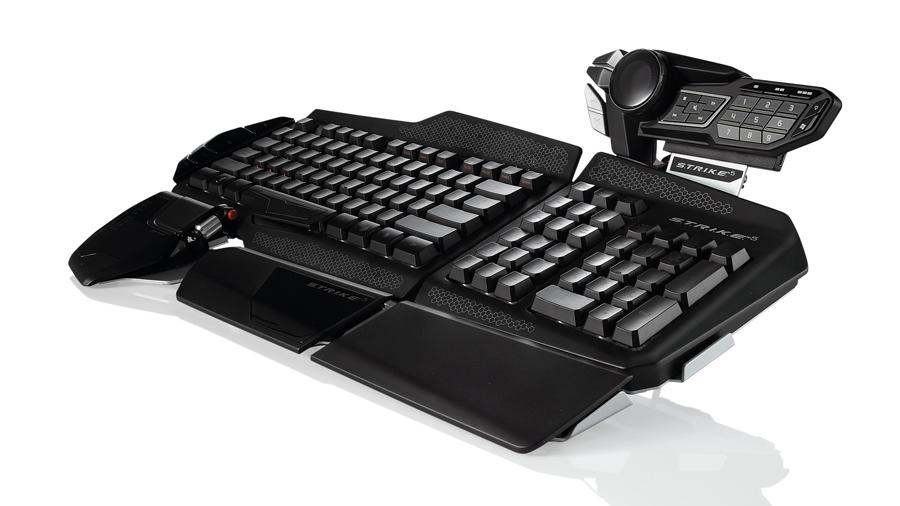 Gaming keyboards are becoming more and more competitive these days. Whether it be programmable keys, separate keyboard modules to customize your desk layout, or incredible back-lighting; companies like Razer, Mad Catz and Logitech are constantly elbow-jamming past each other with newer, better, and more innovative products. After having tested the likes of Razer, I was enamored to get my hands on a Mad Catz product for this review. While I would have probably gone into a geek-coma testing the STRIKE 7, I decided that the more practical and affordable STRIKE 5 would be the better option as a widely accessible mid-range gaming keyboard.

As always, I feel the need to list the product specs up front. Here is a quick rundown of everything the STRIKE 5 has to offer gamers:

What is that?- E.Y.E. OLED Display

When I opened the STRIKE 5 box and started getting everything set up, my first thought, upon seeing the OLED display module was: What is this thing? Although I have used a lot of gaming keyboards, this extra module was definitely a first. After I finally got everything hooked up and started playing around with the E.Y.E. OLED display, I started to wonder how I ever lived without one! This little beast does everything I always wished I could do while gaming. All of those programmable buttons, complete with icon display, were exactly what I needed.

After trying the OLED display for numerous tasks such as balancing my microphone and game volume and launching other websites, I realized that my favorite ability of all is being able to monitor my re-spawn timers. Generally, I end up wasting my own time while waiting for something to re-spawn and then forgetting about it. This feature made my gaming life so much easier and while it may seem simplistic, it was an invaluable tool.  Of course, it is not the VENOM touchscreen which is present in the STRIKE 7 setup, but I think that if you are not tied to the idea of a touchscreen module, that the OLED display is just as functional and will save you close to 100 bucks in the long run. 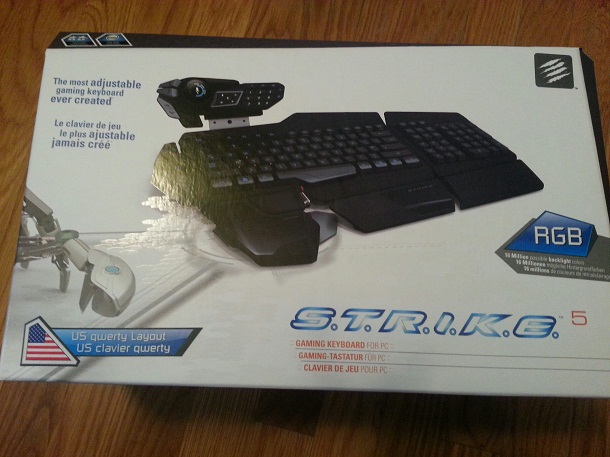 Aside from the OLED display, the most prominent feature of the STRIKE 5 is the customizable modular system that the keyboard is made up of. For some gamers (myself included), space tends to be a factor when it comes to the massive-ness of traditional gaming keyboards. Fortunately for STRIKE 5 owners, the keyboard literally breaks apart and can be placed however the user chooses. Portions of the keyboard (like the number pad) can be removed completely from the setup to create a compact keyboard of sorts that allows for ultimate space optimization. Although leaving the number pad out of the equation might cause the user to lose cursor keys, its still great to have the option. The modular approach is also great for left-handed gamers who need things to be placed a certain way for effective gaming.

I think the importance of a good wrist rest can resonate with all serious gamers out there. The idea of not having one just screams ‘carpal tunnel syndrome’ and I cringe at the thought. My love of a good wrist rest made me that much more ecstatic when I saw the ergonomic setup that the STRIKE 5 sports. It comes complete with two modular-style wrist rests and a palm rest that has a thumb wheel and action key. The wrist rests have a great adjustable height feature and attach to the keyboard and number pad via a 5-pin connector.  I, personally, think that this type of  setup (especially that palm rest!) is essential for every gaming keyboard. If you don’t have it, you are missing out- big time.

While I have never been a huge fan of anything but fully-mechanical keyboards (i.e. Razer Black Widow), I can understand and appreciate what the STRIKE 5’s membrane keys have to offer. They are significantly more responsive to light touch than the traditional mechanical keys, and they also respond to double-taps exceptionally well. They also reset after a certain amount of time and are designed to reduce muscle fatigue over the course of extended game play. They are also engineered to handle 60g of actuation force, so pound away!

I think, when it comes to gaming hardware like keyboards, mice, headsets, etc… there is always personal preference to consider. Every gamer has a vastly different approach and of course, needs change exponentially with the gamer’s choice of game. That said, I personally loved the STRIKE 5 for several reasons. Here’s why:

While the STRIKE 5 is an awesome keyboard, it did have a few features that were contrary to my personal preferences. The membrane keys, while insanely responsive, just aren’t my style. I don’t really like the way they feel and, even though they work great, I would never buy a product with the membrane feature for my own personal use. That said, tons of my friends who also game would die without a membrane keybed, so again, its all in the gamers personal choice. All in all, the STRIKE 5 is a fantastic piece of gaming hardware that gets the job done and more, all while looking awesome!