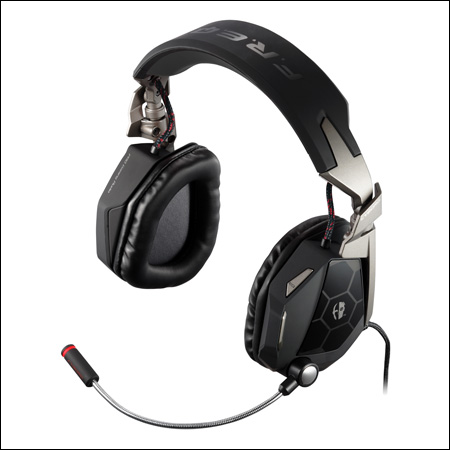 Mad Catz is becoming more and more well known for their gaming hardware such as keyboards and mice. The company made a big splash at CES this year with their STRIKE 7 keyboard and has just released yet another quality gaming (among other things) product: the FREQ 5 headset. Mad Catz has not manufactured a lot of headsets under their name, but instead have kept most of their gaming headsets under their ‘Tritton’ brand. Naturally, I was shocked (and intrigued) that the FREQ 5 was being released under the Mad Catz moniker. 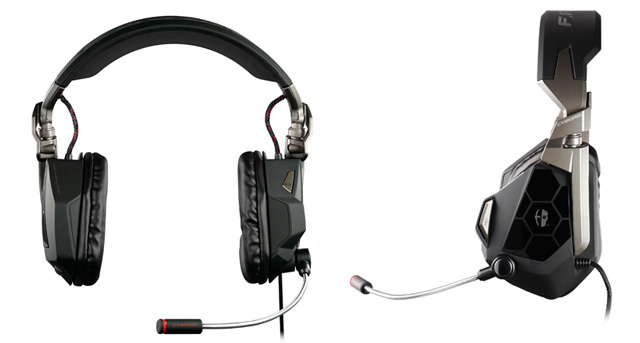 What’s in the box?

To be a high-quality, top of the line gaming headset, FREQ 5 is considerably easy to setup. The headset itself has a short cord attached that ends with a micro-USB connection. In the box, Mat Catz has included two different connector cables. One is two meters in length and ends with a traditional USB connection for computer use. The other is only one meter long and ends with a standard audio connector for use with smartphones. Phone calls, music and smartphone gaming, as well as PC and Mac use, are all supported by this head set, making it exceptionally versatile.

When I initially took the FREQ 5 headset out of its box, my first thought was: “These are massive”. As a woman gamer, I have a tenancy to run into this issue a lot, even though I have a fleeting hope that I may finally find an extremely adjustable headset that can truly accommodate all sizes. I went ahead and put them on, and I was pleasantly surprised that they did, with little work, adjust to fit my head. The metal body had me wondering if the headset would grow heavy or cumbersome on my head after a few hours of play, but just as the box states, the metal truly is ” tough yet lightweight. The ear cups are big and a little oddly shaped. They are large enough to accommodate a sizable set of ears. I suppose this is necessary to offer a good fit for a wide range of users, but they were a bit big on me, to be sure.  The lopsided-hexagon shape is a great and innovative idea to avoid any ear pinching as they are ergonomically shaped, well…like an ear.

The volume, microphone mute and equalizer controls for the FREQ 5 are located on the ear cups. Although lots of gaming headsets have this feature, my own personal set has the controls on a little remote that is attached to the cord. You can imagine my excitement when I realized that I no longer had to feel around blindly in my lap for the controls while trying to play. Even when I finally found the little remote, it was hard to distinguish between the volume slide and the microphone mute. Mad Catz solved that problem as well, by placing the separate controls on each ear cup. On the right side, the volume wheel is placed on the bottom of the ear cup. On the left, you can find the microphone mute, as well as the equalizer buttons. It was so incredibly convenient to be able to reach up and know exactly where the correct controls are, during game play. The left ear cup also houses the microphone mute button that activates a light on the microphone when mute is on.

The FREQ 5 spots 50mm drivers, one in each ear. I find this a little large for a gaming headset and since it’s a stereo headset, I thought there might be something left to be desired in the way of sound quality, however, even though there is no surround sound simulation, I found the stereo quality to be exceptional. I really can’t imagine being more satisfied with a surround sound headset with less prominent ear cup drivers.

Of course, if you’ve read my other reviews, you know I love Warcraft (don’t judge me). So, naturally, I played a little WoW to get a handle on how well the FREQ 5 does during online game play.  I really can’t say enough good things about the equalizer button. With my own headset, I usually get annoyed that the chat dialogue coming from Vent or Mumble always sounds terrible when my audio settings are placed so that the game sounds good, and vice-versa. There was never really a convenient way for me to flip back and forth between audio settings. The FREQ 5 equalizer really changes that, all with the touch of a button. Although there is no way to know which equalizer setting you’re on, since the button is on the ear cup and there is no on-screen info, it is really easy to simply tap the button to toggle between the three settings and get the results that you want. The bass sounds amazing during game play, but it was easy enough to jump to the ‘chat’ setting for more treble and less fuzz when I needed it.

When I first got my hands on the FREQ 5, I wondered from the beginning how well the headset would work with my Samsung Galaxy S3. I knew that the headset was compatible, but I wasn’t sure if the sound would be as good as it is on my PC. I read a few other reviews for the FREQ 5 and some of them claimed that the sound quality was not as good during use with a smartphone, but I found that to be untrue, at least in my case. I found the sound quality to be just as exceptional as with computer use and the equalizer worked just as well, in my opinion. The only drawback of using the FREQ 5 with your smartphone is that, well, you’re walking around with a big ol’ gaming headset on your head. The sound quality makes me wish I could use the FREQ 5 with my smartphone in place of my traditional ear buds, but due to size and portability issues, that is obviously just not practical.

Overall, the FREQ 5 is a great headset. I was slightly shocked at the price tag, especially since the set is wired, but after using the FREQ 5, I would recommend the investment if you’re in the market for a good gaming headset and aren’t tied to having a wireless one. It is a considerable perk that this headset is smartphone compatible as well, but I think it will only be beneficial to those who are into gaming on their smartphones or need a really heavy duty headset for phone calls. Unfortunately, FREQ 5 just isn’t practical for casual music listening. However, if you are looking for a high-end, great quality headset for gaming, the FREQ 5 is the one for you!