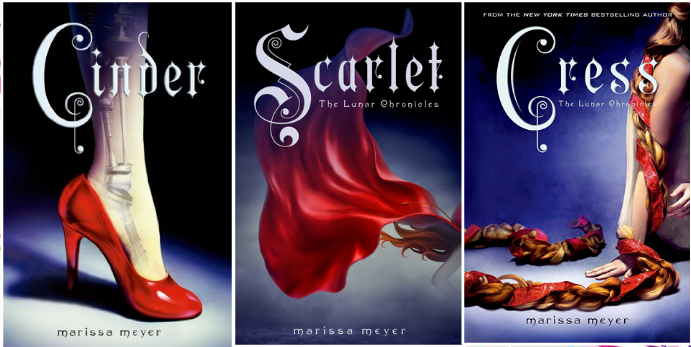 Ever watch your favorite Disney Princess movie and wish it contained a bit more hard-core science fiction? The Lunar Chronicles is perfect for those who wish for a little more cyborg in their Cinderella story. Marissa Meyer, not to be confused with that other Meyer who writes “books”, takes the classic fairytales we all grew up with and turns them into an original and exciting science fiction adventure that manages to avoid the clichés usually present in young-adult books.

The series begins with Cinder, a highly original take on the Cinderella tale. The story is set after World War 4, in a world where a plague, called the Blue Fever, runs rampant and kills everyone unlucky enough to be infected. The moon was colonized hundreds of years ago, and is now an independent nation called Lunar and ruled by Queen Levana. The Lunar people have developed powers of mind-control and hypnosis, and the Earth is under constant threat of invasion from their formidable neighbors. The titular character, Cinder, is a mechanic living in New Beijing. After an accident as a child, over 30% of her body was replaced by mechanical parts. Because of her status as a cyborg, her step-mother and one of her step-sisters torment her mercilessly. Her life is pretty uneventful until the day she meets Prince Kai in the market place and her step-sister is infected with the Blue Fever. The second book, Scarlet, retains the cast of the first, while adding the characters Little Red Riding Hood and The Big Bad Wolf. Scarlet is a farm girl who lives a simple life until her grandmother disappears and she sets off to find her, with the unexpected and initially unwelcome help of Wolf. They end up dating, obviously (come on, this IS a young adult book). The third adds Rapunzel, or Cress, a computer whiz who is reluctantly working for the Lunar Queen while stranded on a satellite. The fourth book, Winter, will be released in 2015. The first book, Cinder, has also been optioned for a movie by an unknown studio. The movie is still in the early stages of planning, and the studio is currently looking for a director.

While The Lunar Chronicles are young adult books, they manage to avoid a lot of the clichés that usually plague that genre. The heroines are smart, independent, and interesting. There is no insta-love, or the moment when they lock eyes and they know it’s true love forever even though they are still in high school. The world-building is intricate and believable, and the vivid writing really brings the setting alive. Another plus is that the plot is fascinating. The writing is fast-paced without being overwhelming, and the reveals are timed just right. The romance could be completely removed from the books and they would still be make up an interesting story, which is a rarity in young adult books. The most refreshing aspect is the complete lack of any love triangle. Shocking, right? By the sheer number of forced love triangles, I began to think there was some law that every YA book must contain at least one. This series either proves that theory false or is illegal, because the author embraced the novel idea of substituting boring and predictable loves triangles with well-developed characters and an interesting plot. The likeable heroines, unique setting, quality writing, and believable romance make The Lunar Chronicles a must-read that I would recommend to everyone.