Lights In the Sky: The Nine Inch Nails Live Experience 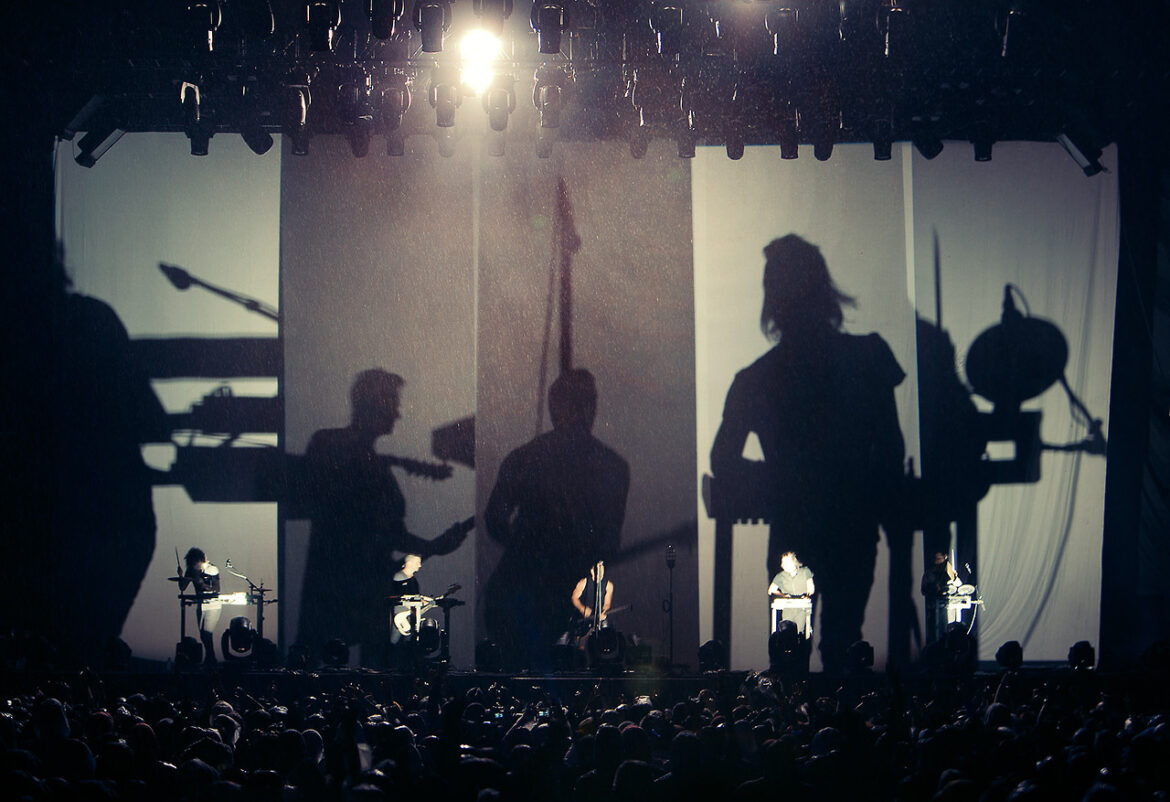 Though already hailed as one of the most innovative and theatrical live acts in rock music, Trent Reznor and Co. are raising the stakes for their “Tension 2013” tour. 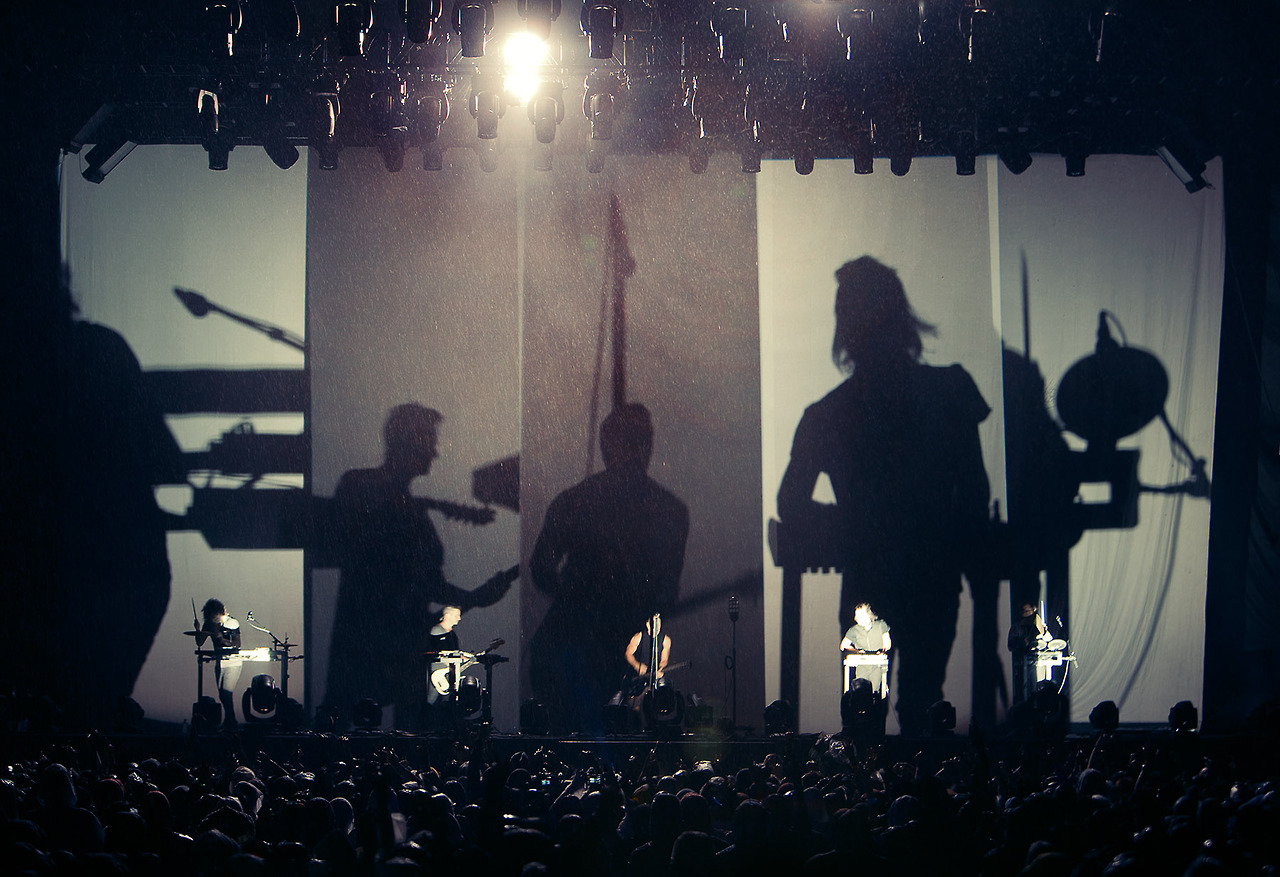 You’re standing in a huge room, surrounded on all sides by a crushing mass of music-loving humanity that you can hear but not see. Murmuring voices speak among the crowd, as if affirming their continued existence. You can relate, as you can’t even see your hand in the total darkness.

After an indeterminable amount of nothing happening, a single, bright light appears on the stage, accompanied by a pulsing synthesizer sample.

After your eyes adjust to the disorienting illumination, you make out a muscular man in a sleeveless shirt and cargo shorts standing before a microphone, singing about being a ‘copy of a copy’.

More lights appear, heralding the arrival of additional instruments, along with the musicians playing them. Each performer adds new elements to the slinking electronic progression.

When the singer straps on a guitar, and the song takes on a harder, more brutal tone, to the audience’s approval. Shortly after the first chorus, projector screens appear behind each of the five member band. Strobing spotlights flash giant silhouettes of the musicians on the high screens, casting them as huge, menacing figure.

As the first song ends, two things become abundantly clear. First, the band has gained the attendees’ complete  attention. Second, this is only the beginning of the innovative audio-visual delights to come… 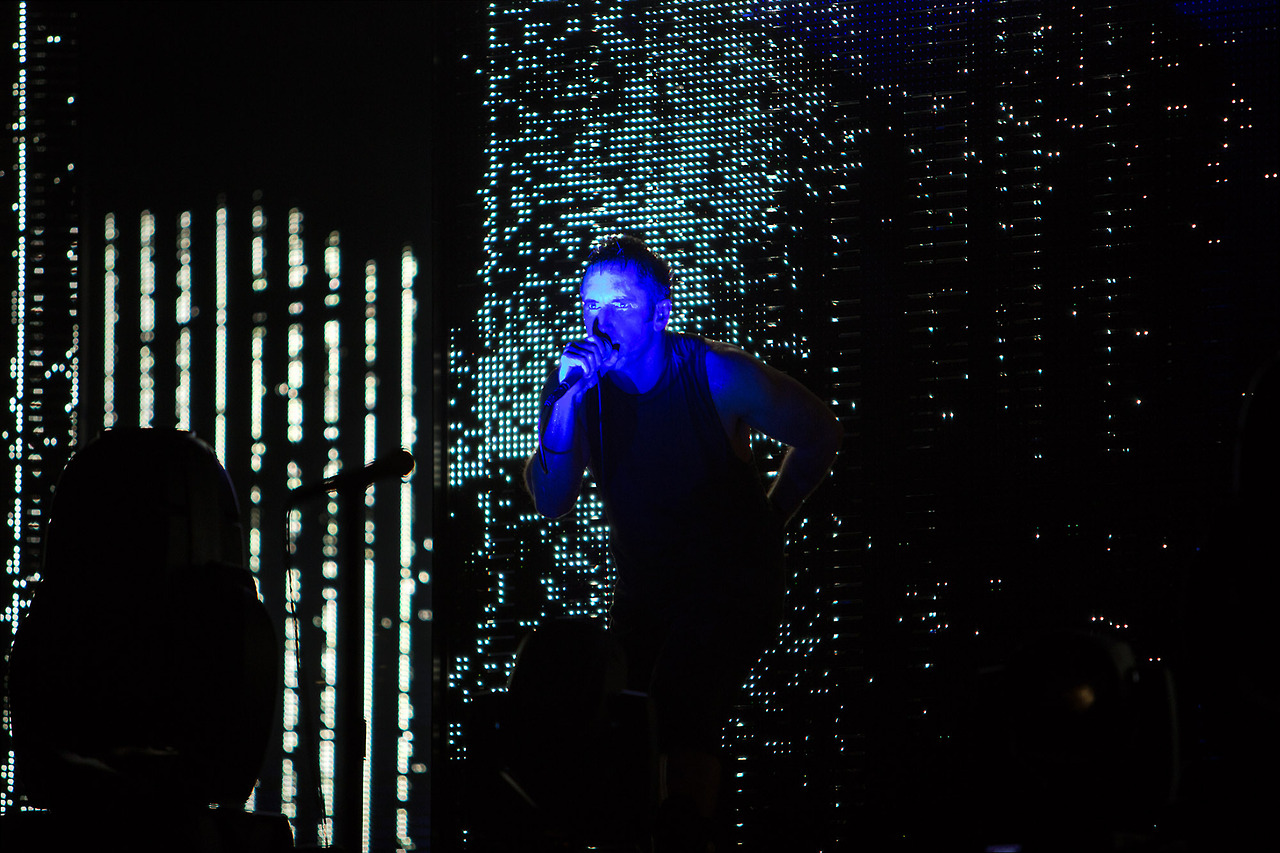 Trent Reznor: The Man Behind The Curtain

Through various incarnations, the Nine Inch Nails live show has endeavored to provide a theatrical visual component to complement the songs.

Each tour is a delicate and intricate choreography of intricate musical performance and high-tech visual showmanship. Setlists are cherry-picked from over two decades’ worth of albums, often accompanied by evocative and thematic photographs and video sequences played on giant LED screens behind the band.

Every element of the live show is painstakingly overseen by one man: Nine Inch Nails’ mastermind and sole permanent member, Trent Reznor.

Even the aforementioned minimalist show-opener, featuring a lone Reznor on stage, was carefully created for a particular effect. Reznor stated that the concept came up as a way of reintroducing the band to concert-goers, while also making it clear that this is a different take on what makes a Nine Inch Nails live show.

This shouldn’t come as a surprise to NIN fans, considering how much Reznor’s life has changed since he announced Nine Inch Nails was going on hiatus in February 2009.

Free from the limited, but familiar confines of his decades-old music act, Reznor shifted gears into new vistas of music. Along with producing partner, Atticus Ross, Reznor composed the scores for two films by David Fincher: 2010’s The Social Network and 2011’s The Girl With The Dragon Tattoo. He also started a new project, with Ross and his new wife, Mariqueen Maandig, called How To Destroy Angels.

Though NIN and HTDA share a similarly dark, technology-driven aesthetic, the experience was very different from what Reznor was used to. How To Destroy Angels’ sound was more slinky and ambient, and songwriting was a collaborative process, rather than solely his own vision.

Reznor also collaborated with his new wife on another big project: parenthood. Since putting his act on hold in 2009, Reznor has had two sons, Lazarus and Balthazar.

These experiences broadened the angsty musician’s perspective, not only of the world, but also what Nine Inch Nails could be.

NIN’s Tension 2013 Tour: Behind the Scenes

This epiphany was not limited solely to crafting the new NIN album, Hesitation Marks. Reznor and Co. have have also applied this new philosophy to the concert experience.

In addition to the typical diverse lighting arrays, projected video clips, and similar standards of the Nine Inch Nails live show, a variety of new elements and technologies are being introduced for the Tension 2013 tour.

These include the aforementioned screens behind band members and a bevy of onstage instruments, organic and electronic, that bring new meaning to the idea of “multi-instrumentalist” for the drastically outnumbered five-man live act.

And if you’re curious how the common household Kinect technology is utilized in conjunction with other, far more expensive, cutting-edge technology, you’re in luck.

The band has uploaded a new behind-the-scenes documentary to their Youtube account, highlighting the design of the Tension 2013 tour, from the ground up.

Musicians and tech geeks alike should pay close attention, because when it comes to someone as singularly detail-oriented as Trent Reznor, you’re bound to learn a thing or two about how to create an incredible live show experience.

Learn more about NIN tour dates and venues at the ‘Tour’ page on NIN’s website. .

To order the new album, Hesitation Marks, you’ll purchase it at the official NIN website.

Xbox One Release Date And Upgrade

Study Into Selfies- Pictures of You