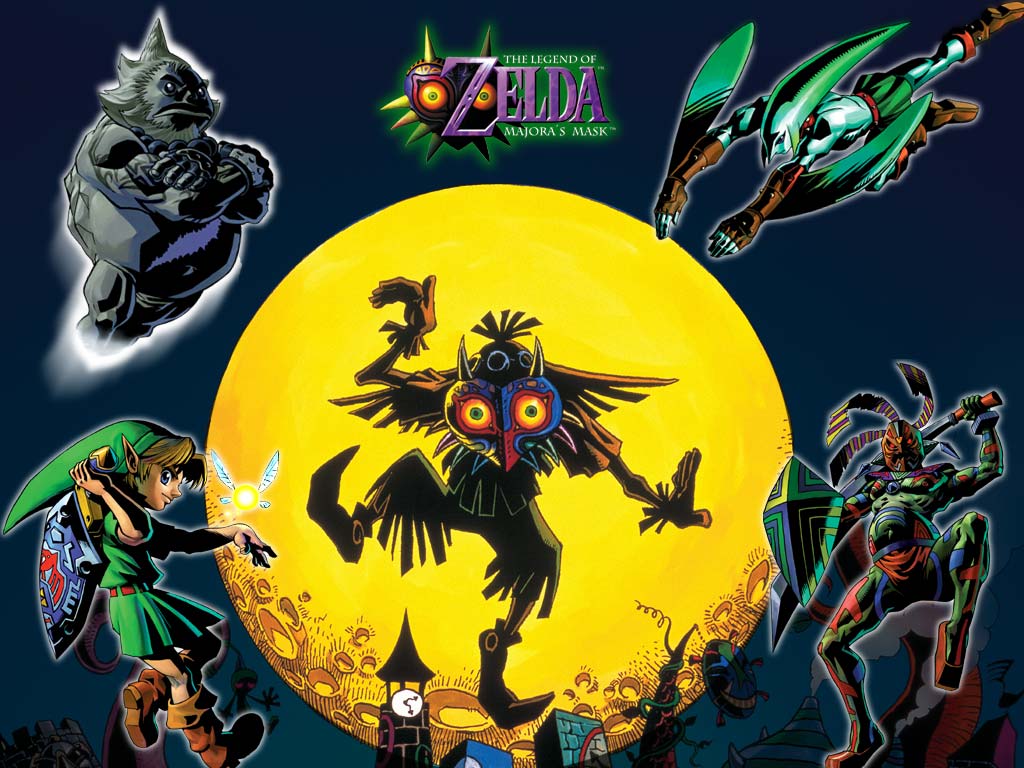 It’s been fourth-teens years, since the release of Majora’s Mask on the Nintendo 64. The game is considered the black sheep of the Zelda franchise. While the typical Zelda game is Princess Zelda being kip-napped, defeating Ganondorf, or recollecting pieces of the Triforce, Majora’s Mask takes a much darker and deeper turn. It is Link’s personal journey, or a better way to describe it, Link’s adventures in wonderland expect with a more nightmarish tone to it.

Link must save an apocalyptic land known as Termina from being crushed by a hideous childhood trauma causing moon within three days. In doing so, he must use three masks: the Deku, Goron, and Zora that literally causes him to wear the skins and faces of creased inhabitants. He also needs to play the instrument, Ocarina of Time to reverse time, so he can give himself more time to save the land. Along with the storyline and gameplay, the game contains some haunting soundtracks such as the “Song of Healing,” and “Time’s End” to add to its dark atmosphere. The game is enough cause anxiety, and to send chills to the gaming audience. Today, fans of Majora’s Mask demand a remake for either the 3DS, or Wii U, so they can relive the experience with better resolute graphics.

An Analysis on Suffering

It’s apparent that the game’s main theme is death. There are plenty of analyses, and even theories that talk about this theme. To learn more about the game’s dealing with death, I recommend watching the following Youtube videos:

My goal isn’t to discuss this theme, since I believe that it has already been beaten into the ground. Instead I want to focus more on another theme that has been lurking around in the game, and that is suffering. Death is usually associated as a bad thing especially more in some cultures, and dealing with death can be a very sick grieving process. In other words, death and suffering can go hand in hand; however, the suffering in Majora’s Mask branches off from death at some points. For example, Skull kid’s suffering hasn’t to do with death, instead he suffers because he lost his friendship with the four giants. According to Anju’s Grandmother’s story, the four giants left Skull Kid. This caused a great sadness inside him, which in time, turned to anger and hate.

Skull kid isn’t the only character who suffers in this game. It’s pretty much everybody. The characters have their individual woes, and it’s up to Link to cure them. Termina is cursed land. Everywhere from its mountains to its oceans is suffering, but as the game continues, things get better. Reconsider the ending, after Majora’s Mask is beaten. All the characters are happy, and celebrating expect the Deku Butler which is controversial. The land, Termina is cured. Life goes on. In The Legend of Zelda: Majora’s Mask, suffering is a huge part of life, but the game teaches how to move on, and deal with it. The games not only offers this as a life lesson, but as a healing process for gamers.

The Kübler-Ross Model Inside Majora’s Mask

Upon Link’s quest, he must awaken the four giants that are sealed away in a different sections of the land, so they can help stop the moon from crashing. They are sealed away in the swamp, mountains, ocean, and crayon. When Link enters Termina, he starts off at Clock Town, before going to these places. In the following order: Clock Town, swamp, mountains, ocean, and crayon represent the Kübler-Ross model. The Kübler-Ross model was invented by American Psychiatrist, Elisabeth Kübler-Ross when she wrote her book in 1969, On Death and Dying. According to the model, it lists the five stages of grief a person goes through when facing a tragic event. The tragic event doesn’t have to be about death, it can be the loss of a relationship, battling drug addiction, facing rejection, undergoing divorce, or suffering from an illness, and much more.

Clock Town is denial. Upon hearing some of the dialogue from the characters wandering around the town, they don’t believe that the moon is going to fall. The carpenter guy is a huge example. He believes so strongly that the moon isn’t going to fall that he has an argument with mayor, and the guards to proceed with the carnival. When the final day comes, he is still in Clock Town, while mostly everybody has fled.
The swamp is anger. The Deku King is angry because his daughter, the Deku Princess, has been kidnapped. He takes his rage upon a monkey that is completely innocent.

The mountains is bargaining. When talking to the Gorons, they ask for forgiveness. They believe that if they change something about themselves, then things will get better. Darmani, a ghost of the legendary Goron hero, begs Link for forgiveness, and asks him to pro-long his life. He is bargaining.

Ocean is depression. Lulu, a Zora singer for The Indigo-Go’s, will stare at the ocean for the remaining three days with a sad expression upon her face, because her eggs were stolen by the pirates.

Finally, the crayon is acceptance. Ikana Crayon was once a land, where many wars occurred, now it is a land where the dead wander in anger, and hate. After the King of Ikana, and his two knights are defeated, they learn that it is time to move on, and let go of their anger and hate. The Composer Brothers, two Sheikah spirits that roam in different sections of Ikana Crayon, are also no different.

Once Sharp’s, the older brother, soul is healed by Flat’s song, he learns to move on. This causes his soul to rest in peace. To top it all off, Link goes to Stone Tower Temple, the highest point located in Ikana Crayon, and receives the light arrows. The light arrows symbolizes enlightenment, meaning that there is a reason for suffering, and understanding it can begin the healing process.

Suffering is a journey. People cannot help but to feel sadness at times, for it is a part of human life. Link’s journey through Termina symbolizes that search, and meaning. It is supposed to provide an understanding for the darker parts of human life, resulting in acceptance. This acceptance completes the person because they now know the reason for their suffering. To accept suffering is only half the battle.

Is Link the Bad Guy?

After completing Stone Tower Temple in the sequenced order: it is time for Link to face Skull Kid, stop the moon from crashing, and allow time to move forward. Link reaches the top of the clock tower in Clock Town. With his Ocarina, he summons the four giants to stop the moon, but the town, or Termina is not saved yet. Majora’s Mask, the mask that skull kid is wearing, comes to life, drops skull kid’s body to the ground, and enters inside the moon. Link must battle Majora’s Mask.

Inside the moon, there are five children wearing masks that are hanging around a tree. If all the masks in the screen selection have been collected, and given to these children, while completing the mini dungeons they give, then Link is rewarded the Fierce Deity Mask, and some dialogue from the child wearing Majora’s Mask is unlocked: “Let’s play good guys against bad guys… Yes. Let’s play that. Are you ready? You’re the bad guy. And when you’re bad, you just run. That’s fine, right?” This quote started speculation about Link being the bad guy. Link is delaying the process of death by preventing the moon from crashing into Termina. Everything in Termina is suffering, and to rid the land of suffering is to destroy it. Another thing Link also does that raises this speculation is that he handles all the characters’ problems, instead of letting them solve it themselves. He disguises himself as the creased inhabitants by using masks, and never does he let these people know the truth that these inhabitants are dead.

This logic of Link being the bad guy is false. After Link is done with an area in Termina, the place is better than it previously was. He transforms himself as the creased inhabitants so he can finish their unfinished business. There is nothing wrong with helping people to solve their problems because not everyone is capable. As for the citizens of Termina not finding out that their loved one is dead, they will learn in time. The Deku Butler learns that his son is dead when the end credits are playing. Skull kid learns that the four giants never left him. He discovers this truth without the help from Link.

The characters in Majora’s Mask do learn how to solve their problems and confront the reality of their dead ones. Link instead represents an on-going battle with suffering. Link works his way through Termina, and betters it, step by step. If no action is taken, then negative emotions such as despair, grief, and anger will continue to remain. Consider the time controlled in Majora’s Mask, there are alternate scenes for the characters if Link chooses to help, or not within a certain time period. Romani Ranch and Anju and Kafei’s quest are a good examples of Link’s interference. People suffer, but sometimes action is needed if they want to rid themselves of it.

Help Out, In Order to Make the World a Better Place

Helping other people in the process doesn’t hurt either. In fact, this game supports helping others, in order to rid the world of suffering. Link may be the one mostly helping others, but he too receives help. After the Song of Time is played for the first time, Link enters inside the clock tower to confront the Happy Masks Sales Man. He rids Link of his curse by playing “Song of Healing.” Though, it’s debatable since the Happy Masks Sales Man wanted Majora’s Mask back in return, but he stills fulfills a promise that helps Link. Link also receives rewards from the inhabitants that he helps out. Depending on the items that Link receives, they can aid him a lot during his quest, even allow him to move forward on his quest. Imagine a world where everybody cared for each other. Majora’s Mask represents that world.

The moon disappears, turning into a rainbow, after Majora’s Mask is defeated inside the moon. Termina is saved. This ending scene is where everybody is celebrating. It is the result and reward for battling suffering. In order to heal, it takes a journey to darkest parts of human mind such as represented in Link’s travels in Termina. To handle suffering is to understand its existence, experience its emotional stages, and learn from it. To suffer is a tough battle that can be conquered as represented in Link’s quest, and ability to save the land. Reaching out to others even helps in the process. The Legend of Zelda: Majora’s Mask serves as a guide transfer into an art form on how to conquer pain. Only when this misery is mastered can the healing begin.