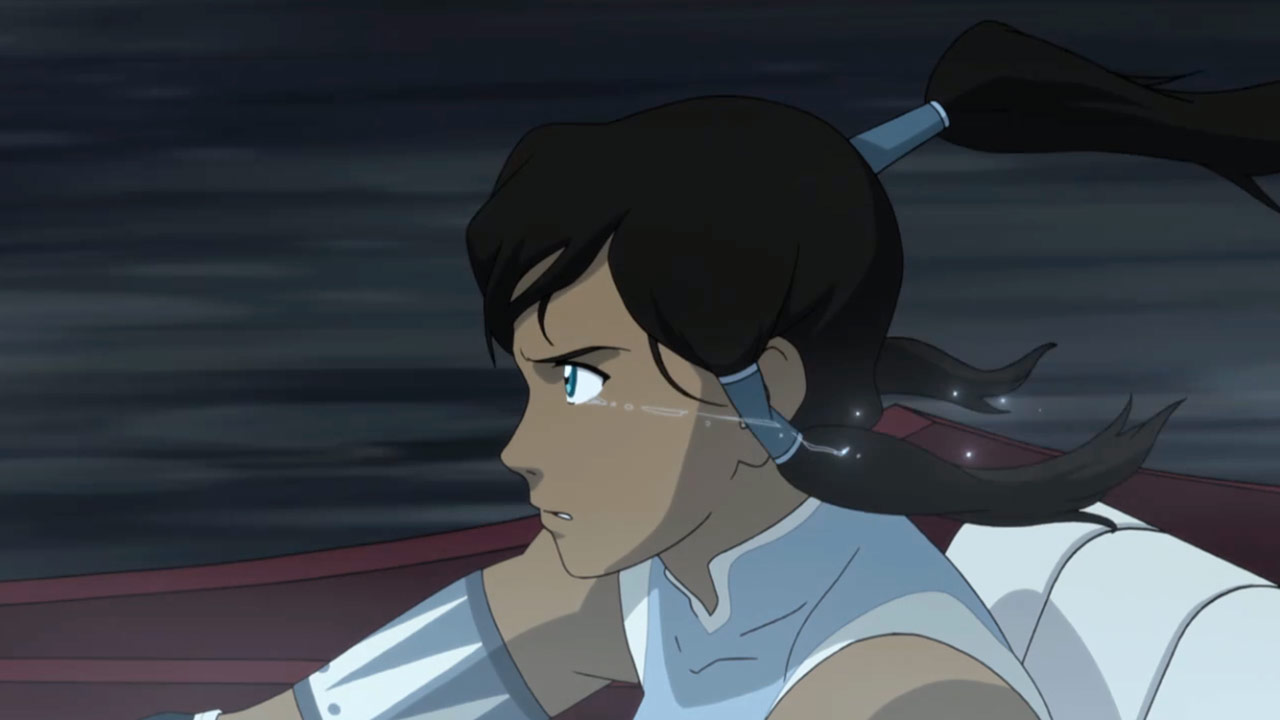 I recently expressed my lack of faith in the Legend of Korra season 3 based on the trailer. That doesn’t mean I’ll stop watching it. Quite the opposite. I awaited the premiere even more anxiously because I wasn’t sure if my fears would come true. As it turns out, nearly all of my fears were put to rest by the three part premiere of Korra Book 3: Change.  In addition to setting up an interesting new conflict and mission for the team, it introduces creative characters and foreshadows golden opportunities for character development.

Chapter 1: A Breath Of Fresh Air

The new season starts roughly where season 2 left off with our announcer stating that two weeks have passed and mini “spirit wilds” made of tangled vines have popped up around the world. These are the effects of Korra’s climactic decision to reuinite the human and spirit worlds. It is hinted that even more changes are about to come. Cut to Bumi with his standard ridiculous antics, chasing BumJun off a cliff but stopping his fall with a burst of air. Yes, strangely enough Bumi has learned to airbend and rushes to tell Tenzin.

Meanwhile, Korra tries to destroy the vines of the spirit wilds that have encased some homes in Republic City. She is frustrated with her inability to control the changes she put into motion. The citizens are apparently frustrated too as Korra’s approval ratings are in the crapper. This is a good set-up for Korra to grow as she truly faces consequences for her actions.

Mako is still a workaholic as a detective for the Republic City police. While sleeping under his desk one night he gets a call reporting a man spontaneously bending air and destroying a china shop. When he arrives, the man is hiding but air blasts the door into Mako and escapes. The mystery of the spontaneous airbenders continues to grow.

Korra and Asami share a nice little scene as Korra tries to drive stick and fails miserably. The two talk about how Mako has been acting extremely awkward lately due to the weird love triangling of the first two seasons. They laugh at how much they screwed up trying to get him but both are glad to be on good terms. Korra gets an idea to get rid of vines like she would dark spirits using the purifying water technique. This appears to work at first but the vines come back and destroy another building.

Korra tries to connect to her past lives for guidance but the connection is broken. Tenzin reassures Korra by saying that change can be seen differently from different perspectives and she learns to accept that the world will continue to change.

The police track down the new airbender and Korra talks him down, having learned how to grow from changes rather than hide. The President hasn’t learned this and banishes the Avatar from causing trouble in his city. Korra and Team Avatar resolve to travel the world looking for new airbenders. The episode ends with a teaser of a villain of the season. Zahir is a convicted criminal (with a bizarrely mismatched voice actor) who gains airbending and escapes, vowing to destroy the White Lotus and the Avatar. Who is he and what is he planning?

Korra, Bolin, Tenzin, Jinora, and Bumi take off with Asami in an airship to locate more airbenders. Mako is reluctant due to his career and relationships with Korra and Asami, but goes when Bolin reminds him that Ba Sing Se is where their father is from. The gang visits many airbenders but none of them are interested in the airbender lifestyle.  Finally, they find Kai, a young orphan boy who wants to join them. He tells them outlaws are chasing him so he wants to get away.  When five men demand Kai be handed over, Korra leaps to his defense. However, it turns out Kai is a liar and a thief.  The men are police ready to arrest him for stealing from his adoptive family. In the end, Team Avatar decides to bring Kai along anyway, hoping to reform him. He is also hinted to have a brotherly bond with Bolin, a romantic connection with Jinora and a rivalry and parallel with Mako. He seems to be a brilliant addition to the group who will grow and change both himself and those around him.

Throughout the episode Zahir breaks into similar highly guarded prisons to his own to free the rest of his evil team.  This includes an earthbender man who can create hot magma and an armless waterbending woman who can create water arms. Zuko flies off on a dragon to warn people of the coming threat.

Team Avatar arrives in Ba Sing Se to look for more airbenders but first they must ask the Earth Queen’s permission.  She is a superficial, power-hungry woman covered in gaudy jewelry. She tells Korra that she is angry with Aang and Zuko for creating the United Republic in Earth Kingdom territory. Still, she says she will help in the search if Korra helps retrieve taxes from the poor outer circle. She agrees even though outlaws threaten to steal the taxes. Korra and Asami fend off the outlaws and deliver them but Korra feels guilty for stealing from the poor and giving to the rich.

Meanwhile, Mako and Bolin get separated from the group chasing after Kai who is up to his old tricks. He steals from the rich inner circle and hangs out at a fancy hotel. Mako and Bolin get stuck in the outer circle without money and reminisce about their time on the street. They meet up with dozens of their relatives and have a heartfelt reunion.  Mako even gives his grandmother his scarf symbolizing his willingness to move on from past and hopefully his brooding.

Zuko continues to try and stop the fourth prisoner from being released by Zahir. The final member of the team is a female firebender with the same powers as combustion man, but Zuko, Eska and Desna are personally trying to make sure she won’t escape.

When Korra returns to the Earth Queen, she states there are no airbenders in Ba Sing Se. In reality, the Dai Li are capturing them all to create an airbender army. Even Kai gets kidnapped. It seems like things haven’t changed much in the city of secrets.

These episodes immediately top anything from season two. The characters all show growth and potential for more in the future. Mako and Bolin are dealing with their past and becoming closer as brothers. Tenzin is deeply moved by the appearance of new airbenders. Korra is facing consequences and acting more compassionately. Asami is being less of a pretty face on the sidelines and more of a close friend for Korra. The story also shows promise as it brings back familiar foes like the Dai Li but adds the new benders who are incredibly threatening. The goal of finding airbenders creates a cohesive path for the team but with room for side quests that deal with spirits and other issues.  The group is traveling so we can see more of the expansive world and new characters like Kai help develop our favorite characters. Most importantly, the group is not nearly as split up, meaning the pacing won’t drag on and on.  I’m not anxious anymore for the next episode, but I’m extremely excited to see what will happen next.