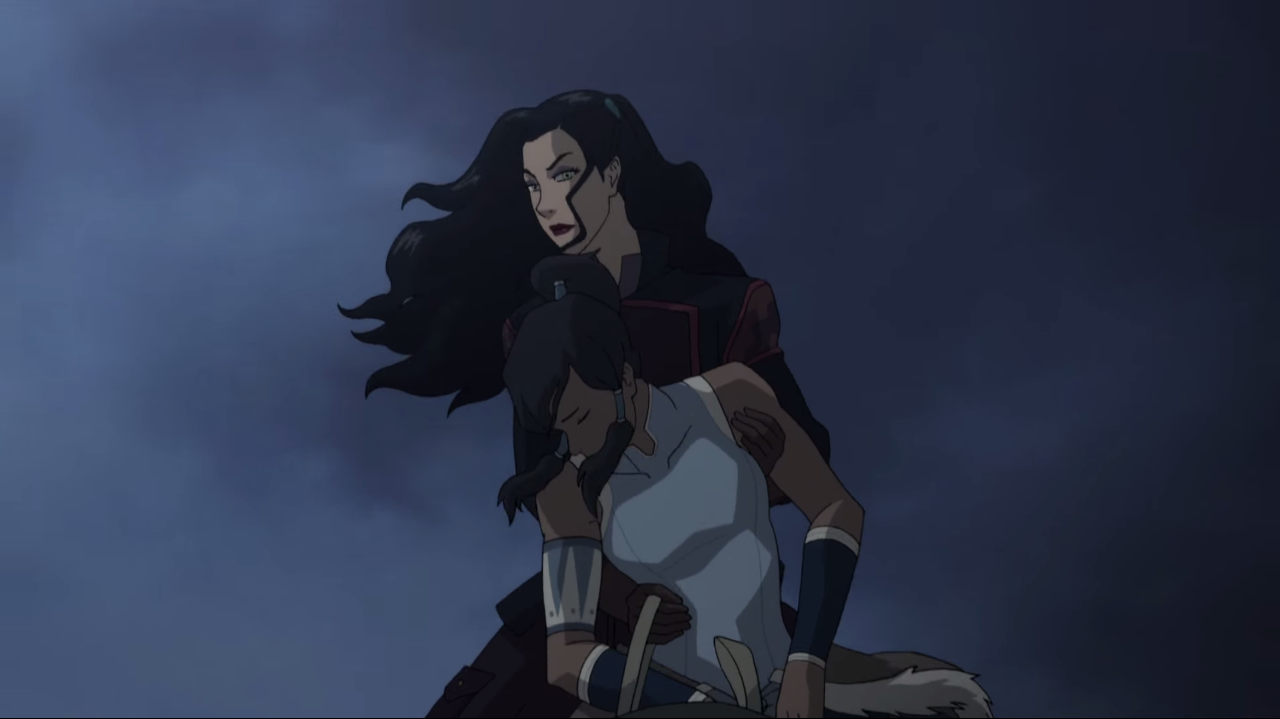 “The Stakeout” is easily the best episode of Korra so far. It combines action and philosophy, reveals numerous secrets of the Avatar world, and gives all of the characters something to do. This was a great episode to switch to digital as well. It resolves the cliffhanger in the last episode in an incredibly satisfying way, so all fans should want to continue watching online. Without further ado, let’s recap another fantastic episode of The Legend of Korra.

The episode starts where The Terror Within left off. Korra and the gang track Aiwei’s scent to the Misty Palms Oasis.  Fans of the original series will remember this location as the place where team Avatar searched for Wan Shi Tong’s Library. Since the Last Airbender, the oasis has become overrun with spirits and has grown significantly.

Mako and Bolin go undercover in Misty Palms to find Aiwei while Korra and Asami look for clues by Aiwei’s abandoned getaway vehicle. Mako tracks Aiwei to a small hotel. Asami finds a note saying Aiwei will meet Zaheer at sundown in Xai Bau’s Grove. However, neither can locate the grove on a map.

Rather than taking down Aiwei and losing their lead, the team decides to stake out the hotel and follow him to Zaheer.  To pass the time while watching Aiwei, Bolin and Asami play some Pai Sho. The two have very different styles of playing because of their different upbringings. The rules say that each way of playing is equally valid, which mirrors one of the major themes of this season. Both the heroes and villains of this season have valid ideas, so neither is really the wrong way or the right way. But we’ll see this in the next scene.

They tire of waiting and find that Aiwei is meditating. Xai Bau’s Grove is actually a location in the spirit world.  Zaheer appears and throws Aiwei into the fog of lost souls to make sure he can no longer lead Korra to them. Then, out of nowhere, Zaheer says he will answer any questions Korra asks. He explains their society is called the Red Lotus, a splinter cell of the White Lotus. They believe the White Lotus never should have come out of hiding to serve as bodyguards for the government. Xia Bau was the first to break from the White Lotus.

Zaheer also reveals that Unalaq was a member, who proposed the idea to kidnap a young Avatar. When that failed and Zaheer’s team was captured, he tried another plan to use Harmonic Convergence to become a Dark Avatar.  However, this was not part of the Red Lotus’s plan. They only wanted to reunite the human and spirit worlds as Korra eventually did. The next phase of their plan is to take out governments and return the world to anarchy. While it may seem strange for him to reveal his entire plan, it is actually a clever ruse to allow the Red Lotus to capture Korra while she is in the spirit world.

Mako and Bolin try to keep Ghazan and Ming Hua busy while Asami escapes with Korra on Naga. However, they are no match for the bizarre bending styles of the Red lotus. Mako and Bolin are taken by Ming Hua but Korra and Asami are captured by someone else entirely. The Earth Queen’s forces have captured the Avatar, and it’s anyone’s guess what her nefarious plans will be.

The most interesting part of this episode is the focus on philosophy and world view. Zaheer’s knowledge of Airbending philosophy and their lack of belief in government or laws is a perfect motivation for the anarchistic Red Lotus. It also gels nicely with Korra’s constant issues with authority and the corrupt leaders of the Avatar world.

The humor with the Pai Sho game and Bolin and Mako going undercover is a joy to watch. The members of team Avatar are actually developing chemistry and dialogue bounces around the group nicely. All the characters play a role as well.  Detective Mako continues to entertain while Bolin’s nonsense is funnier than usual. Asami also finds some clues, goofs around with Bolin, and tries to protect Korra. Although it is strange how Korra being unconscious for fights is becoming more common, it does let the others fight a bit more often.

“The Stakeout” represents a much stronger direction for The Legend of Korra than the first half of the season had.  The last four episodes promise to be even more action-packed, more character driven, and more thematically interesting than anything in the last two seasons.