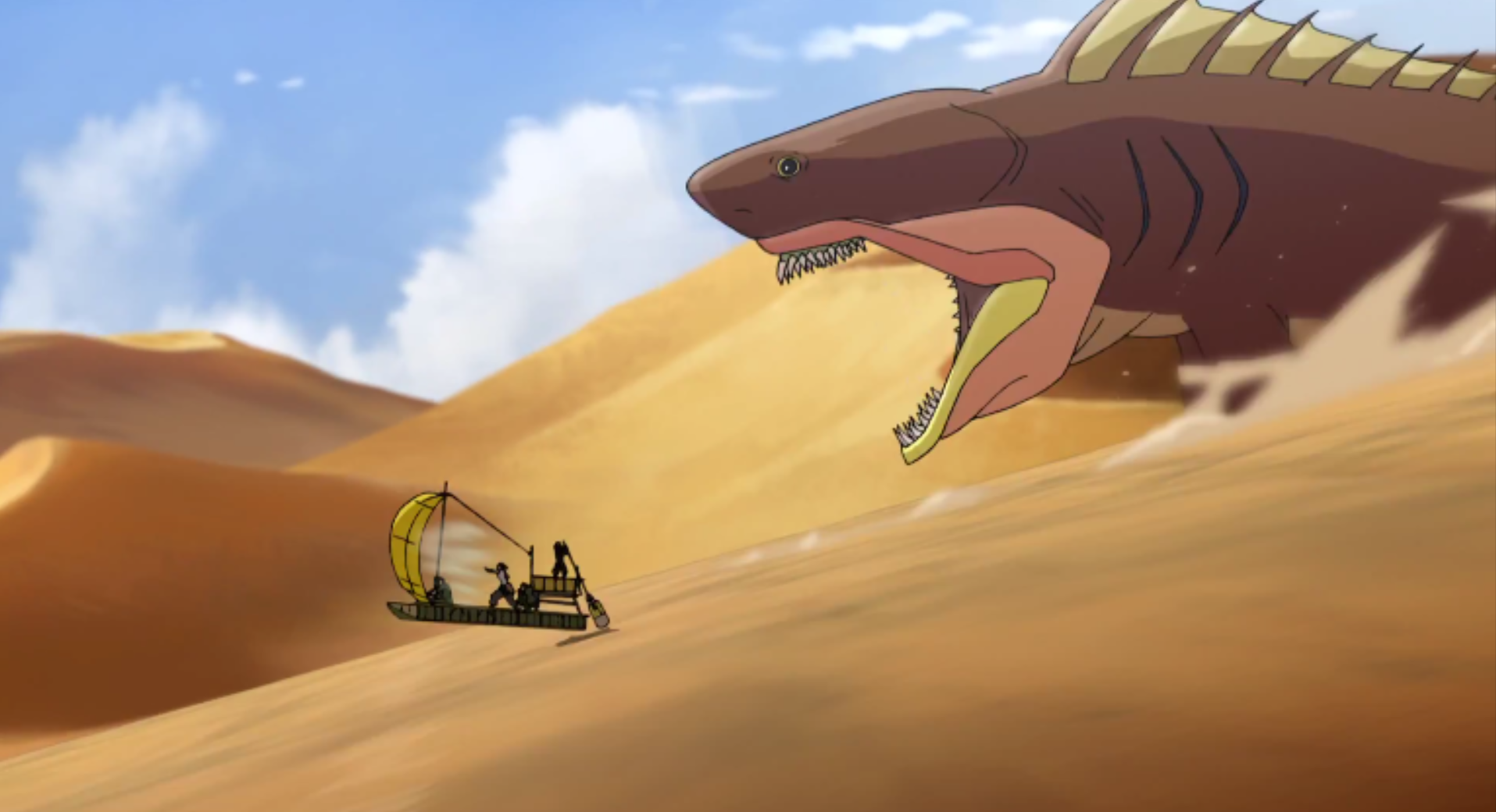 As The Legend of Korra book 3 begins to speed up into its final chapters, each episode leads directly into the next.  So, we begin where we left off, with Korra and Asami captured by the Earth Queen’s forces and Mako and Bolin taken by the red lotus. Both are headed straight for Ba Sing Se, one by airship and the other by car.

The Legend Of Korra – Episode 10 Recap

With Korra trussed up like Hannibal Lector, it’s up to Asami to set her free. She sweet-talks a guard into giving her the means to escape then sneaks through the vents to knock out a guard and steal the keys. With both girls free, they take out the captain of the airship, but end up crashing in the middle of the desert. The ship is too damaged to fly without a lot of work and a spirit seems to be lurking underneath the sand. In fact, as soon as they finish rebuilding the ship, a gigantic sand shark snaps it in half. So in order to escape the desert and the shark, Asami and the airship’s crew build a makeshift sand-sailer out of the wreckage.

Meanwhile, Zaheer delivers Mako and Bolin under the guise of a bounty hunter. He asks the Queen for no reward but instead threatens her. He says that he would reveal that she captured the Avatar unless she handed Korra over. In this way, Korra would still be out of the Queen’s hair while she tried to recapture the airbenders, and there wouldn’t be an international incident over her release. The Queen agrees and the two brothers are dropped into the dungeon. Bolin tries to metalbend them out of prison but finds he still can’t bend metal. When Zaheer discovers that Korra has escaped, he decides to start his coup against the Earth Queen. He takes out the Dai Li almost immediately and then brings down all the inner walls, creating anarchy.

As Korra and Asami finally make it back to Misty Palms Oasis, they find that Lin has tracked them down. And she brought Tonraq and Lord Zuko as back-up. As the end credits roll, it’s clear that all the bubbling conflict is coming to a head.

This episode falls a bit flat. It’s important for putting all the characters in the right places. But the characters have very little development and nothing important really happens. Asami gets much more to do, but none of it was specific to her character. She’s still a bland and unnecessary part of the group that could easily be filled by anyone else. The land shark is also pretty ridiculous. They say it isn’t a spirit, so it didn’t come from harmonic convergence.  It attacks them but only once every hour, and it seems to mainly attack the machinery, not the people. It was a cool design, but an ultimately pointless obstacle.