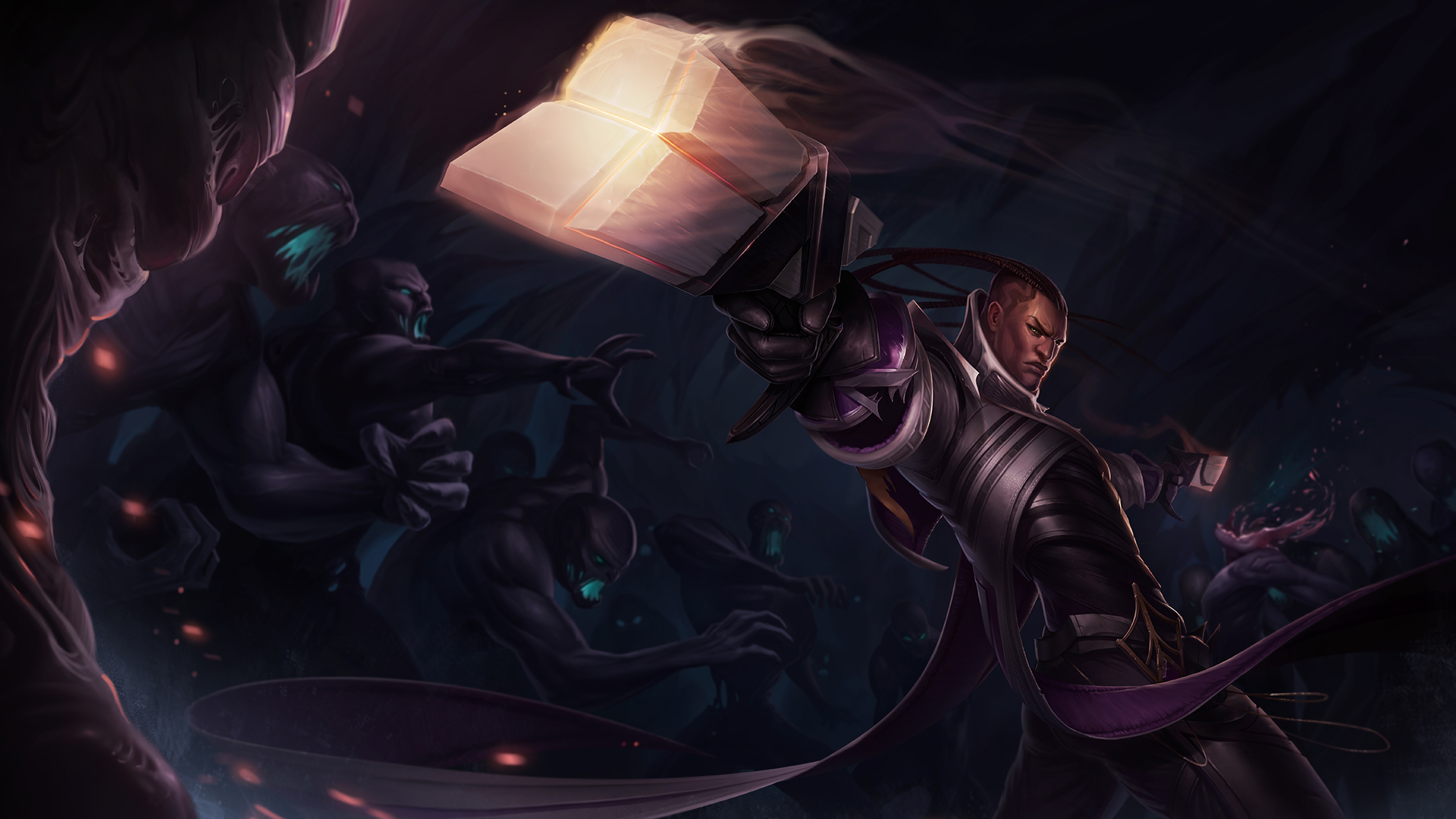 After what feels like an epicly long wait, Lucian the Purifier has finally hit release. With a pair of ancient artifact guns Lucian hopes to hunt down Thresh in order to free his wife from the confines of the lantern. So, after all the time it took for him to come out how does Lucian hold up against the other marksmen in the league? Not very well it would seem.

Lightslinger: After using an ability Lucian’s next auto attack will fire a second shot that deals 50% damage to champions

I was really worried about how useful this was going to be with the reduced damage on the second shot. As it runs out however Lightslinger has proven itself to be an awesome tool for early game trade and poke. It is almost like having a mini Sheen on him to give that extra damage boost in order to scare off champions from engaging with you. The second shot applies on-hit effects so you can get double the Blade of the Ruined King passive.

Piercing Light: Lucian fires a line AOE passing through his target and continuing behind it.

While I was sort of aggravated that this turned out to not just be a straight up skill shot, it was still Lucian’s most powerful skill. While the target you select has to be within the 550 range of Lucian, the line will actually continue for 1100. This makes the skill fantastic for harassing, possibly both bot lane champs if they line up. As Piercing Light levels up the scaling with bonus AD on the ability also increases as follows: 60/75/90/105/120%.

The immense reach and impressive damage of this skill make it great for pushing other marksmen out of the lane. Combining Piercing Light with Lucian’s passive makes him sort of scary even before he get’s any items. Lucian is likely to have knocked off a good chunk of an enemy champs health before they even make it to him for an auto attack. Sadly the ability does 75% damage to minions, so it is not as helpful for farming. Once you get out of the laning phase, it’s range become less impressive as you begin having to target champs with the 550 range since there are often no minions around. 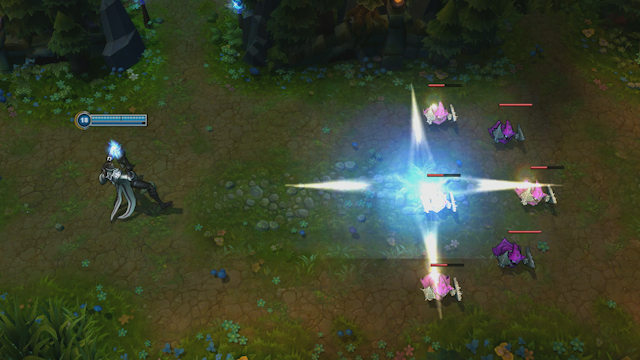 Ardent Blaze: Lucian fires a a shot that explodes in a cross pattern after hitting an enemy or reaching the end of it’s 1000 range. If an enemy is hit they are marked for 6 seconds, and basic attack Lucian lands on a marked enemy grant him 40 movement for 2 seconds.

I can’t say that I am a huge fan of the Ardent blaze ability. I found it tough to harass with due to it exploding on first contact and it’s cross pattern design. The movement speed buff was almost useless as I almost always wanted to open a fight with Piercing light for the damage, and so I would have it sooner off cooldown. Ardent Blaze is best to be held for right when someone is turning to run away. You pop them with it for some damage and chase potential. To be honest, I felt like it was a less impressive Piercing Light and rarely had cause to use it.

The strangest thing about Ardent Blaze is that alongside it’s mediocre 60% bonus AD scaling, it also has a weirdly high AP ratio of 90%. This is a bit of a strange ratio to have slapped on the ability of a marksman champion. I guess on the upside it gives him to option of building an Iceborn Gauntlet without feeling too terrible about the AP on the item.

Relentless Pursuit: Lucian dashes a distance of 425, removing all slows. The ability cooldown is reset if Lucian scores a kill or assist during his ultimate.

Relentless pursuit has covers the same distance as Graves’ dash, but I never felt like it. Perhaps it’s because the ability only removes slows on use that it seemed like it could never save me. If I’m facing an Ashe ans dash to get away and remove the slow, the arrow the is in the air still and hits me mid dash will apply its slow. The ability doesn’t protect you from slows while dashing, so it is often very easy to reapply them. It is however amazing against a Nasus who wants to wither you, you’re out of that the second it lands.

I think the real prize with this ability is that it will also remove attack speed slows that are attached to a movement slow. Wither, Ice Blast, Randuin’s Omen, this would normally be detrimental to any marksman as it would slow their killing potential. But Lucian can Relentless pursue to dispel the entire effect, movement AND attack speed slow. 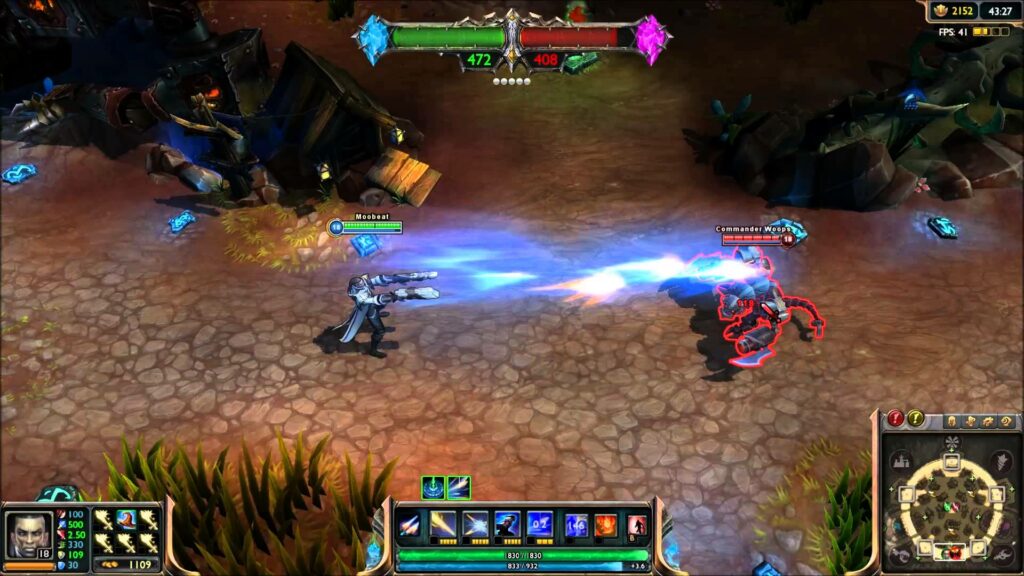 The Culling: Lucian will fire shots in a select direction for 3 seconds. The amount of shots fired will be determined by his attack speed at the time of casting.

This is Lucian’s true weakness, which is sad since it is his ultimate. When you cast Lucian’s ultimate he just shoots a bunch of shots at that specific angle for 3 seconds. It is often to easy for an enemy to just get out of the way of the shots, since you can’t adjust which way they are going. You can still move Lucian himself, and even activate his dash, flash, and ghost. But, that is never enough to make up for the fact that someone can just step to the side if they have more movement than you.

This might lead you to think that you just need to pull the trigger when the enemy champ is right in front of you, but that doesn’t work either. Most champions have a way to just hop to your back side in order to dodge all of the shots. In team fights you’re almost always stuck blasting the front line tanks in the face since you have no way to pierce through them with the ability. If you ask me, this is where the weakness in his kit shows, and keeps him from scaling well into late game. It basically just ends up being a crap version of Miss Fortune’s ultimate.

It is worth noting that Sword of the Divine’s active cannot grant Lucian extra attack speed for The Culling. Other items and abilities will be taken into account, like if Nunu has Blood Boiled you right before using the ultimate. This was done in order to keep players from taking advantage of a potentially broken interaction *cough* Vayne BotRK *cough*. Also, for things that are relevant to facing direction, like Tryndamere’s Mocking Shot, it uses the way his moving not that way the model is facing.

Lucian fails to stand up to the power of other marksmen. His ultimate doesn’t have enough power to take out the only people it will be hitting in a team fight, so it becomes pretty useless. He lacks any crowd control in his kit, so he is wholly too reliant on his support in order to pick up kills. If you are going to give a marksman zero CC, then you need to give them intense killing power. Without a fix on his ult, Lucian will be stuck as a mediocre carry.