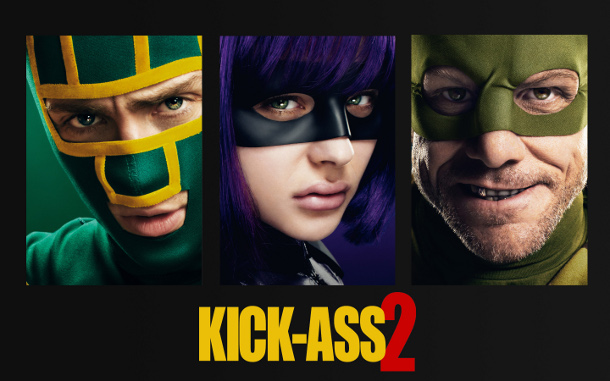 Welcome to another Geek Insider movie review. Kick-Ass 2 is on the lot for today. Did you see it? Let me know if you agree with the review.

Kick-Ass 2, the byproduct of the brilliant original, unfortunately suffers from the same sickness that plagues most sequels; it just isn’t as groundbreaking or entertaining.

The film begins where the first Kick-Ass ended. Dave Lizewski (Taylor-Johnson) has abandoned his masked persona of Kick Ass and has returned to high school life. He struggles to find meaning in his life, reveling in the fact that other masked vigilantes have emerged to carry the torch and taken to the streets. He eventually seeks the help of Mindy Macready (Moretz) or “Hit Girl” to train him into becoming a proper superhero. However, Mindy struggles with her desire to fight crime and her guardian’s insistence that she live a normal life and fit in with the other high school girls.

At this point in the movie, the storylines split and we essentially watch two separate films. Mindy lives the plot of “Mean Girls,” finding herself adopted by the popular girls, surpassing the Queen Bee in coolness, and then watching her life fall apart when the Queen Bee exacts revenge. Mindy does get revenge in the form of a scene involving some CGI bodily fluids, but this whole plotline felt out of place with the rest of the movie. While I’m all for seeing bullies get their comeuppance, in my mind, Hit Girl had better things to do.

So while Mindy is busy playing high school, Kick Ass seeks out “Justice Forever,” a hodgepodge of super heroes (such as Dr. Gravity, Night Bitch, and Battle Guy) that join forces to do everything from volunteering at food kitchens to thwarting the bad guys. The group is led by Colonel Stars and Stripes (Carrey), a born-again mobster looking to make a positive difference in the world.

Meanwhile, Chris D’Amico (Mintz-Plasse) wants to make a name for himself as the “World’s First Super Villain.” The resulting villain (The Motherf**cker) assembles a racist (so much so that it’s acknowledged in the film itself) team of miscreants to destroy the city and take down Kick Ass.

The overall experience leaves you wanting. The violence is certainly over-the-top, way past the point of overkill. Obviously, nothing in this movie is supposed to be subtle, but the way it was executed diluted the once-entertaining action scenes. What made the first film so successful was spacing out the action scenes so that the ultra-violence stood out from the rest of the movie. Kick-Ass 2 has so much CGI blood and violence that it all tends to blend into the background. The dialogue was also over-the-top, to the point that by the end of the film, the harsh language and ridiculous deaths were no longer shocking.

Despite the negatives, there were certainly some bright spots in the film. Moretz as Hit Girl once again shined throughout the film. Her ability to fluctuate between being a (potentially) normal high school girl to an absolute badass was fun to watch and the best action sequences in the film all involved her doing something extraordinary.

Jim Carrey as Colonel Stars and Stripes was also enjoyable to watch. He had some strong criticism of the film after completion, claiming it was incredibly violent (he wasn’t wrong about that), and you get the impression that his scenes were filmed apart from the rest of the film. None of his scenes included the ultra-violence found in other sequences, but I found him to be one of the more entertaining aspects of the film. He also was given some of the best dialogue, which just shows that he is still the versatile funny-man we’ve all come to know and love.

Kick-Ass 2 didn’t really achieve anything new. All the things that made the first one so good were amplified and forced into every scene instead of letting the few intense moments shine. There were some cool action sequences and memorable characters, but in the end, the distractingly-crass language and inane dialogue overshadow a potentially engaging story.