Bless the benevolent Disney Gods of Kathleen Kennedy and Co. for this gem. The Last Jedi trailer is HERE AND IT’S ABSOLUTELY EVERYTHING IN THE UNIVERSE I HAVE EVER WANTED. I have, personally, not been this happy since the last teaser a couple of years ago.

No but seriously, throwing aside my swelling geekiness like a pestilential shroud, shirking my duty as a nerd to ‘gasm’ over this tidbit ad infinitum, this looks like it could be a good movie. Tonally it’s dark, as second chapters are wont to be, but it looks different enough from The Empire Strikes Back that some of the criticism TFA has had may be mitigated this second time around.

Anyways, onto the Breakdown.

THE BREAKDOWN OF ‘THE LAST JEDI’ TEASER

– We get a shot of a heavily breathing Rey and her hand.
– Lucasfilm lights up in its shimmeriness, and Luke in V.O. says “breathe”
– Shot of Ahch-To in sunlight “just breath, now reach out” Luke in V.O.
– Shot of Rey moving small rocks with her mind, obviously in training.
– “What do you see?” Luke in V.O. as we get a shot of the Resistance command center and Princess Leia.
– “Light” she replies, and we get a shot of a smashed Kylo Ren helmet, “darkness”
– A shot of some weird thing, supposedly on Ahch-To, and then Rey’s hands touch a jedi symbol.
– “The balance,” she says.
– In a wide shot, we see Rey practicing with a blue lightsaber on the island, while Luke watches.
– Then we get two shots of a new kind of ship cruising over an arid landscape, spraying red mist behind.
– We get a quick shot of Finn in stasis.
– BB8 and Poe running down a resistance Ship hall…
– To his X-Wing, when a large explosion in the hall mushrooms behind it.
– Shot of the Millenium Falcon shooting down a Tie Fighter, and being chased by two more.
– Rey running at night, lightsaber in hand.
– Close up of Kylo Ren, demasked, with his scar, teasing his red saber in front of the camera.
– Luke and R2D2 prostrated before a burning Jedi Temple.
– Shot of Captain Phasma walking through fire and smoke.
– Cut to several shots of an intense space battle between the Resistance and The First Order
– V.O. “It’s time for the jedi to end.” says Luke.
– Final shot of Luke, at the entrance to a cave, looking back, presumably at Rey. 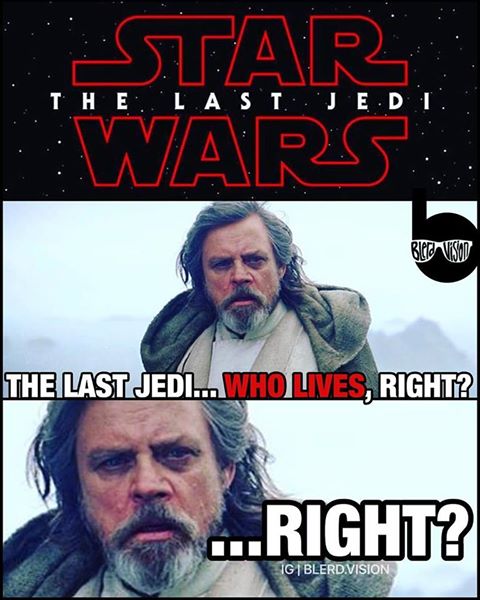 So, what does this all mean? Well, knowing Rian Johnson’s love to subvert the genre he’s writing and directing in, I think it is safe to say that this film will spend a good deal going over Jedi lore that has been established by Disney in recent years with Clone Wars and Rebels, focusing on this idea of Jedi and Sith as part of a greater whole. Perhaps Luke has found some terrible revelation about the Jedi’s past, and maybe they weren’t the heroes we thought they were?

That would be an interesting path for Johnson to take, and would stride away from this more prosaic idea of good vs evil that has been so prevalent in other SW films. Rey and Kylo Ren are obviously going to be inextricably linked in these next two films, and much will rely on their relationship – that much is clear, just from a breakdown of their narrative direction. Either way, I think the central revelation of this film will be about the Jedi and for Luke and Rey to find a new way forward, whatever form that may take.

Vague enough? Agree? Disagree? Feel free to get into it on the comments!