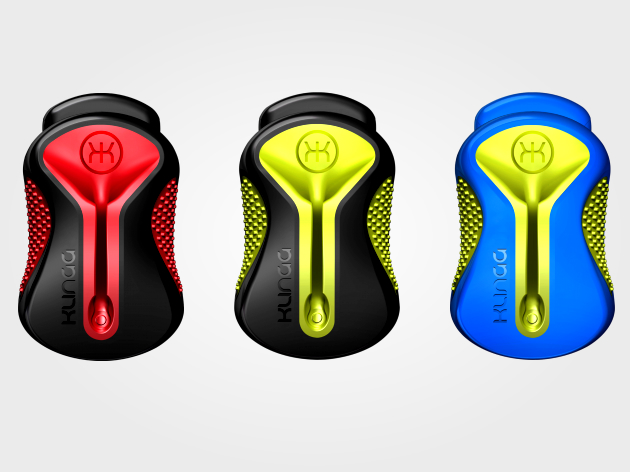 Every now and then, I stumble upon a simple gadget and wonder why someone didn’t come up with it sooner. This week, I had the chance to review a ‘Klingg’; an ingenious device advertised as a “wearable magnetic earphone cord holder”.

In an effort to test out all of the advertised features of the Klingg, I decided to take a brisk jog downtown while using the product. Prior to my Klingg testing, I had basically stopped listening to music when I run, simply because earbuds are a hassle and because the behind-the-ear headphones annoy me. If my in-ear earbuds would just STAY in my ears, running with music would be no problem. I was delighted to find that Klingg solved virtually all of my earbud dilemmas.

Super-Strong Magnet- While ‘super-strong’ might not be the technical words for these amazing neodymium magnets, that’s exactly what they are. Once your clothing is sandwiched between the Klingg magnets, the unit will not be moving at all. It will stay secure until you decide to take it off. Because of the magnet’s strength, the Klingg can be attached most anywhere, even on the thickest of clothing (think winter jackets or denim).

Cable-Holding Groove- One of my biggest issues with having any set of earphones in my ears when running is the free-hanging cable. While I have tried threading the cable through my shirt, I would much rather not have to utilize my clothing as a means to reign in my earbuds. Klingg’s main feature is the cable holding groove that keeps your earbud wire close to your body and stops them from hitting the ground if they happen to pop out of your ears during vigorous exercise.

Magnetized Sides- This was the best feature in my opinion and while the makers of Klingg advertise that not all earbuds will work with this feature, mine worked with no issues. I stopped at the Farmer’s Market on my jog and decided to test out whether or not my earbuds were compatible. I removed my earbuds while making a purchase and instead of having them dangle from the Klingg unit, they magnetized neatly to the sides of the unit where the finger grips are. It felt good to have a designated place to put them when the earbuds were not in use.

Earbuds Stay In Better- The Klingg’s packaging advertises this fact, but I was unsure about the claim until I tried it for myself. While there is no physical part of the Klingg that makes this happen, it seems that the groove that holds the cord takes a considerable amount of the pull away from the in-ear portion of the earbuds and as a result, they did not fall out of my ears at all on my jog. This was a vast improvement over the three or four times I would normally have to put them back in.

Coming in a wide variety of colors, there really is a Klingg for everyone. I really loved the convenience of having my earbuds secured without hassle and knowing that they weren’t going anywhere. I was slightly disappointed to learn that not all earbuds will be magnetized to the sides of the unit, but was happy to find that mine were, hoping that I am the rule, rather than the exception. With a reasonable price point of $20.oo, I would recommend Klingg to any avid runner or even someone who just wants their earbud cords out of the way.