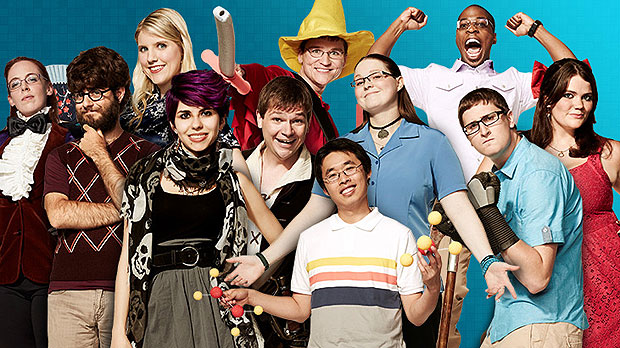 For the second year in a row, I sit here having watched the season finale of the TBS reality show “King of the Nerds” and wondering what I just watched. I even took some time to rewatch it and pass more sound judgment. The show follows a familiar style and format to other reality competition shows, but ends up being totally different than its counterparts. I’m not saying it is the best show on television, but why then have I spent the last eight weeks thinking about it? Let’s break down the second season of “King of the Nerds.”

The show begins with 11 self-proclaimed nerds coming together to live in a fancy house, known as Nerdvana, filled with video games, Rubik’s Cubes and foam swords. They are broken up into two teams who compete in a “nerd war” competition every episode. The losing team is then eligible for elimination as two of their members compete in the “nerd off” competition where the loser is sent home. Each team votes “Survivor” style to put one person in the “nerd off.” Make sense? Do you think they work “nerd” in there enough?

Now with this set-up there are a few reasonable concerns that come about. Let’s clear those up now. I have not confirmed the nerd credentials for each contestant on the show, but they are either really good actors or actual real-life nerds. Then there is the worry that these nerds are brought on to be laughed at and mocked by the cool AC Slater type people watching at home. That has some truth in it because of the socially awkward individuals that have the cameras following them. But they are (for the most part) sympathetic and real people. Maybe there is some jerk sitting on his couch readying his wedgie gloves for a chance encounter with the Nerdvana residents, but forget him. This is a chance for nerdy individuals to go on a reality show with their personal talents emphasized. Also, who has wedgie gloves? That’s weird.

Season two of “King of the Nerds” began with the two teams picked in an, as awkard as it sounds, school yard pick ‘em. Hosts Curtis Armstrong and Robert Carradine of Revenge of the Nerds fame presented various half-twists and misdirections to throw off the players, but eventually the group was split. They chose the names “Titans of Rigel” and “Midas Touch Attack” for their teams (bonus points in the comment section if you know what those reference). Then the game was afoot.

The cast had a good mix of players for the audience to root for and against. The editing surely played a part, but that’s what happens in competition shows. The specialties represented were quite impressive. There was a roboticist, a bioengenieering Ph.D student, an inorganic chemist, two women with a focus on space among other sciency people. On the arts side there was a library science scholar, a fantasy writer and a Pokemon expert. So this list is why I’m not questioning their credentials.

But beyond the titles and degrees they are 20-something Americans plucked out of their normal lives and put in a house full of free alcohol. It didn’t turn into “Jersey Shore,” but the show had its share of embarrassing moments and weird arguments that are bound to happen when everyone thinks they’re the smartest person in the room. That level of pride established the show’s main antagonist, Zach, who had a healthy amount of screen time. His team, “Midas Touch Attack” was picked off one by one as in-fighting made them easy to root against. Promising contestants like Josh (Pokemon expert) and Mary Kate (Aerospace engineering student) were eliminated early as Zach kept winning “nerd offs” that contestants and viewers alike were hoping he’d lose. I do take his on-screen character with a grain of salt though. I find it hard to believe he was actually as naive and frustrating as the show’s edit presented him. But I cheered when he was eliminated.

But while the audience rooted against Zach, the opposing team, “Titans of Rigel,” became fan favorites. The on screen dynamic of the team was balanced well with academic and pop culture personalities. Standouts Brian (Library science scholar), Katie (Roboticist) and Xander (Gaymer) were funny and relatable. Their confessional sound bites can be credited with carrying the story forward in most episodes. All three ended up being eliminated under less than ideal circumstances. Katie was flipped to the opposing team in an attempt to even out numbers and was eventually eliminated as a victim of her old team’s dominance. Brian and Xander were both eliminated in the final trivia “nerd war.” Trying to avoid each other’s strengths, they allowed the other two left standing, Jack ( Bioengineering student) and Kayla (Master of science in space studies), to earn their way into the finals.

The final showdown had the eliminated contestants pick one of the two to support and help out in a series of table top challenges called the “Nerdliminator.” There was Pac-Man, Sudoku, a sliding puzzle, etc. It was quite underwhelming to be honest. But many of the season’s prior challenges held up much better. There was a live-action role playing event, a go-kart race with the visual aesthetic of Tron, and robot dodgeball among many others. Ultimately, Kayla won the “Nerdliminator” in a close contest earning her seat on the “Throne of Games,” the title of King of the Nerds and a monetary prize that seems way less important to the players than on other reality shows.

I ended up really enjoying season two of “King of the Nerds” like I did the first. There is still no word yet if TBS will bring the competition back next year, but I’m hoping so. There has been a lot said about the similarities and differences of the title of geek versus nerd, but there is obviously quite a bit of overlap. “King of the Nerds” fits right in with the interests of Geek Insider’s readers, so it’s worth a watch.