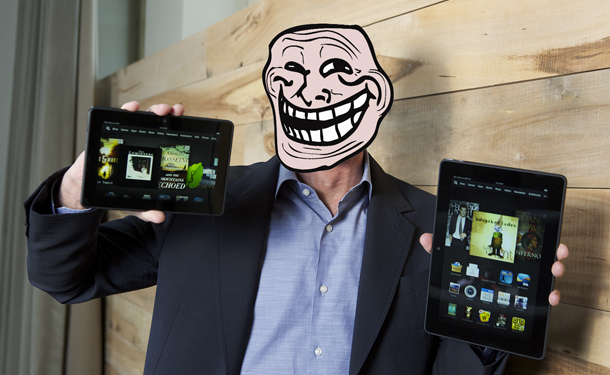 In an obvious nod to Apple’s hypnotic video presentations, Amazon has produced this commercial comparing their new Kindle Fire HDX favorably to the latest iPad Air. It makes for a refreshing change, really; we don’t often get to see these companies take direct shots at one another. Let’s run through what exactly it means to see Apple skewered, and imagine how such tactics might work out for Amazon.

No apology is forthcoming regarding the content of this manipulated photograph. I regret no aspect of it.

In the Apple realm, talking heads trapped in a cool ethereal void preach improvements and upgrades and ‘up-to’ comparisons—up to five times sleeker, up to ten times more likely to impress your friends–while enraptured users soak up the Apple magic from the comfort of their clean and stylish kitchens. It is a universe where everything is smooth and metallic, voices are serene and mellifluous, and electronic products are rotating marvels engineered with such precision that the tools responsible are capable of slicing through the fabric of reality itself.

It’s no wonder, then, that so many people speak of their Apple products in such hushed, reverent tones. There is no room for cynicism; anything present is good, anything missing is unnecessary. This is partially why it’s traditionally been so difficult to rival Apple’s hold on the hearts and minds of the middle-class masses. Attacking the claims is a fruitless endeavor as their boasts are invariably accurate. If they promise something, they deliver it, or even exceed it. Attacking the methodology, however, risks appearing jealous and spiteful.

Do Apple’s campaigns warrant mockery? Once upon a time, I would have said so. They employ slick marketing patter in a bizarrely earnest manner and it annoys a lot of people because it seems deceptive and manipulative to them. There can be a fine line between making good fair use of advertising and doing it so well that it borders on taking advantage of people, and Apple have ploughed right over that line and coated the whole floor in glossy aluminum. These days, though, I find it hard to view them too negatively. There are various good reasons to avoid purchasing Apple products—their steep prices, their locked-down ecosystem, their tendency to smugly dismiss any approach that doesn’t exactly fit their own—but I don’t think their devotion-inspiring commercials actually deserve much ire. If Apple didn’t do it, someone else would gladly step in.

Amazon may be sitting pretty as the dominant online retailer, but it seeks so much more than that; this much is clear. The ambition they applied to that task has now been turned in part to new avenues of opportunity, and—like many, many others—they want a piece of the tablet action. They took a big hit to get their line of Kindle-branded tablets started, cutting costs and incurring losses just to get their foot in the door. Indeed, their investment has been so enormous that despite their massive business they frequently fail to turn a profit.

Take their inclination to pump any money they make back into the development pipeline, add the aforementioned shot at a Jony Ive stand-in (and their staggering upcoming drone-based delivery system, on which I will comment more thoroughly at a later date), and you get a strong impression that Amazon sees what Apple has and wants to take it from them.

It’s taking a long time, but the Amazon phone will show up eventually, and when it does it may cost nothing for subscribers to one or more of Amazon’s premium services. Much like Apple used the popularity of their immaculately-designed iPads and iPhones to lure people into their system, perhaps Amazon could use their popular sales system to lure people into using their phones and tablets. Would Apple then start selling other things through their stores? It might be quite amusing.

As an impartial observer, I would love to see a knock-down drag-out brawl for supremacy between Apple and Amazon, two companies for whom it is never enough to provide just part of a consumer’s computing experience. Apple armed with a loyal following, iTunes, and the App Store. Amazon armed with delivery supremacy, Amazon MP3, and the Amazon Appstore. If Apple released a budget iPad, or Amazon unleashed a high-end option, there could be some real nastiness. Well, either that or they would attack one another so forcefully that they’d end up merging and becoming Applezon, or Amazapple, represented by a finely-engineered aluminum drone that knows all your shopping habits. Who can say at this point?

World of Warcraft Movie Release Date Pushed Back to 2016