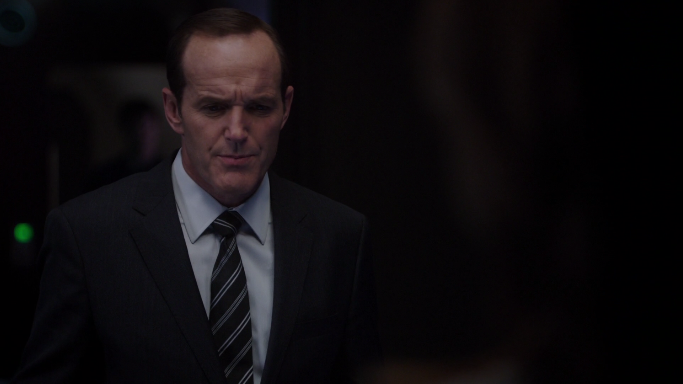 Warning, this article contains spoilers for previous Agents of S.H.I.E.L.D. episodes and minor spoilers for Thor 2: The Dark World.

We open at a convenience store in Utah where four people have died in a particle accelerator accident, and the only survivor seems to have developed uncontrollable telekinesis. When she’s harassed by the clerk, she’s protected by cans and shelves that seem to be throwing themselves at her aggressor, and when that fails, the store explodes, which everyone miraculously survives. Frankly it’s a far-fetched set-up for an episode, but this is based on superhero comics and those aren’t known for their realism. It’s still unbelievable that this small town in Utah owns a particle accelerator.

The SHIELD PTSD Drinking Club has evolved into the SHIELD PTSD Sex Therapy Club since last episode. Once May and Ward rejoin the team with no one suspecting, Team Coulson’s off to be the welcome wagon. Skye is eager to follow in Coulson’s superhero-collecting footsteps but Coulson chooses May to help as the situation is delicate. On scene, a mob is already preparing to lynch Hannah, the survivor, who they blame for the other deaths. Someone throws an egg at Hannah; the ghostly force throws a car at them. Now definitely a threat, the mob escalates–so May shoots the girl with the Night Night Gun. What? It was a delicate situation.

Back on the Bus, Coulson comforts Hannah, again bringing May. Hannah swears she’s not responsible for the attacks. God has abandoned her because she failed to find a fault in the coupling that exploded in the lab–a demon did it. Cue creepy disappearing silhouette behind Coulson.

I wonder how long it will take six SHIELD agents and hundreds of viewers to notice me lurking in this doorway?

Meanwhile, in the lab, Skye is complaining to FitzSimmons about how May shot Hannah. Deciding to prank Skye a bit, they tell her some bullcrap story about May being called the Cavalry because she literally rode in on a horse to save some SHIELD agents in Bahrain and took out 100 armed mercenaries by herself. You can’t blame Skye for believing Melinda capable of such badassery, but it does cement Agent May in her mind as a heartless fighting machine. That and a lack of meta-awareness make her miss the parallels being drawn between May and Hannah this episode– “Someone with that much empathy being responsible for that much loss of life? She’s devastated.” Clearly even Ward doesn’t know the true story; he nixes the horse thing but his version of how May received her nickname sill rings of Expert Agent, not of human suffering. Their pillow talk must be more like pillow repression.

The Bus is definitely under siege by a demon–or at least by Tobias Ford, one of the lab techs who was supposed to have died in the lab accident. Instead it appears to have caused him to become stuck between Earth and another Realm, which he believes is Hell. (And it may well be Muspelheim.) He is, in a sense, an embodied portal like the ones popping up in Thor 2, which they specifically reference. He de-powers the Bus, which May lands in a field. Hannah is safe in the Cage, but Coulson’s Crew is still stranded and trapped in a plane, so FitzSimmons and Ward go to try and fix the damage. Coulson tells Skye the real story of the Cavalry–he, May, and some other agents were the welcome wagon in Bahrain when it went south. There was no horse, no trained assassins, no guns. The agents and a civilian girl were held hostage, and May–who used to be a lot warmer and empathetic–did what needed to be done. Coulson claims he doesn’t know what that was.

Unable to reach Hannah, Tobias becomes violent towards the team. May realizes what he wants and decides to use Hannah as bait, taking her out of the cage and off the plane to an old barn, where Tobias won’t be able to hurt any of the other agents. Back on the plane, FitsSimmons and Ward are able to put together that it was Tobias who caused the accident, purposefully sabotaging the integrity of the machine as he had several times before, and then filing safety complaints. Skye realizes this was because Hannah–with whom he’s in love–would have visited each time to check the machine. Tobias wasn’t trying to hurt Hannah, just the people who he thought were putting her in danger: the aggressive clerk, the mob, and now the team.

May realizes this too when he teleports in front of Hannah to protect her from a falling beam. She tells Tobias that he’s hurting Hannah; that he needs to give up on trying to be in two places at once and allow himself to be fully dragged to the other world. “If you care about her, and I know you do, let her go. Let the girl go.” Tobias complies. Coulson and the others arrive just as he finally dissipates. Coulson wants to know what May told him to make him leave. 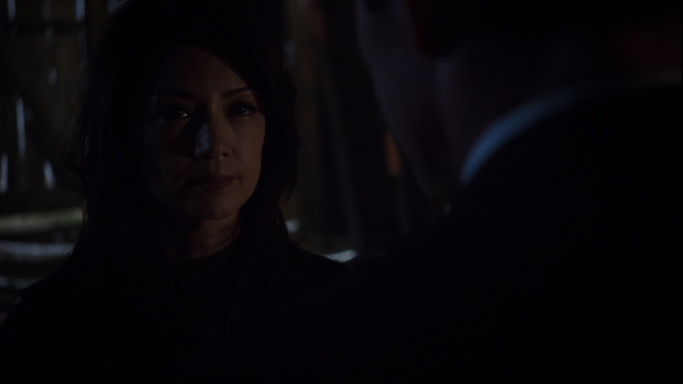 “The same thing you told me in Bahrain.”

Dark episode. We’ve gotten hints into May’s past this episode and last, but the story’s still incomplete. What do you think happened? Is May’s Bahrain the new Budapesht Incident? Are you desperate to know more, or hoping for a break from drama next week? Let us know.