Home Entertainment The iTunes 99 Cent Rental of the Week: ‘The End of the Tour’
Entertainment

The iTunes 99 Cent Rental of the Week: ‘The End of the Tour’ 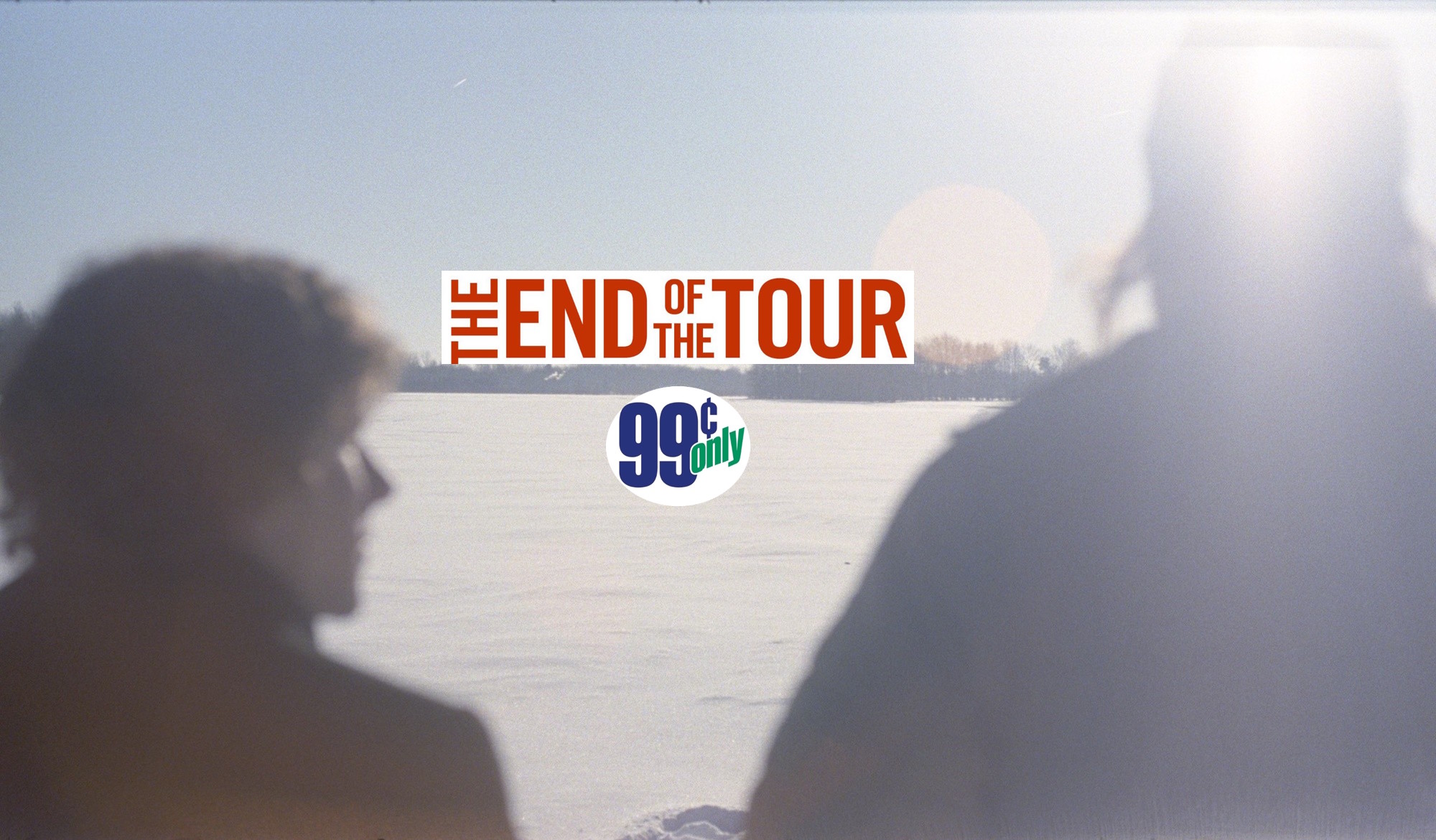 iTunes must have read my Anti-Summer Movie piece back in May, ’cause here’s another stellar film off of that list. Get your lit caps on and get ready to listen to Jason Segel and Jesse Eisenberg talk life, loneliness, and junk food in The End of the Tour.

I Really Like Talking to You About These Things

Way back in 1996, Journalist David Lipsky spent five days on the road with David Foster Wallace gathering material for a Rolling Stone profile. As the curmudgeonly author closed out the promotional tour for his landmark novel, Infinite Jest, Lipsky captured every moment of the ensuing conversations via tape recorder. Though Lipsky’s Rolling Stone piece was never published, those tapes became the foundation for his own bestselling book, Although of Course You End Up Becoming Yourself. Now those tapes are the basis for James Ponsoldt’s poignant film, The End of the Tour. Featuring sublime performances from stars Jason Segel (Wallace) and Jesse Eisenberg (Lipsky), Ponsoldt’s film unfolds almost entirely over the pair’s five day sojourn. With a focused immediacy, every passing thought and every passing moment carries an unexpected weight. Eschewing the formulaic trappings of biopics, The End of the Tour takes a surprisingly objective look at one of literature’s great enigmas that’s as rewarding emotionally as it is challenging intellectually. In a Meaningful Way, You’re Going to Die

Infinite Jest is one of those books that lays virtually untouchable in the literary canon. Like many of you, I have a copy Infinite Jest on my bookshelf. Like many of you, I’ve never gotten around to reading it. The good news is that you don’t need to know anything about David Foster Wallace or his writing to appreciate The End of the Tour. That’s got a lot to do with Director James Ponsoldt’s artfully laid back approach to the heady material. Captured in warm natural tones by DP Jakob Ihre and utilizing a delicate, ethereal score from Danny Elfman, Ponsoldt’s film never imposes a distinctive style to the story. With Screenwriter Donald Margulies crafting his script almost exclusively from Lipsky’s tapes, style is hardly necessary. Cast and crew seem more than content to let the material speak for itself. Fully embracing the ‘talky’ nature of the story, Ponsoldt and his team craft an introspective whisper of a film that is less concerned with uncovering what made Wallace tick than it is eager to listen to the ticking.

To that end, Jason Segel and Jesse Eisenberg really do tick throughout The End of the Tour. For nearly two hours, talk is the only action as Wallace and Lipsky travel the Midwest waxing poetic about everything from the alienation of the internet age to the societal intrigue inside the Mall of America. As the actors trade lines with a crisp, natural chemistry, walking and talking has rarely been more engrossing.

That has a lot to do with Jason Segel. Casting off the ‘lovable doofus’ persona so carefully crafted over the past decade, Segel finally embraces the actor we knew was buried under all those goofy glances. As Wallace, Segel is nothing short of revelatory. Pitting the writer’s gentle nature against his towering intellect, Segel’s portrayal is as quiet as it is verbose and as confident as it is insecure. Bubbling just beneath the surface is a deep ocean of melancholy that informs the author’s pointedly introspective view of society as much as it complicates his place in it. As conversations unfold between Wallace and Lipsky, Segel internalizes his showier instincts. Holding it all in, even the slightest turn at the corner of his mouth signals a stolen joy or the discovery of some profound truth.

The truth is exactly what Eisenberg’s Lipsky is after. Again stepping into the role of intellectual neurotic, Eisenberg turns in his least twitchy performance and brings a stodgy weight to the proceedings. Playing Lipsky somewhere between worshipping student and envious fanboy, Eisenberg is as effective running his mouth as he is keeping it shut. As the reporter pokes and prods for some grand truth that defines Wallace, he begrudgingly finds a normal guy who loves his dogs and carries a weighty addiction to diet soda. 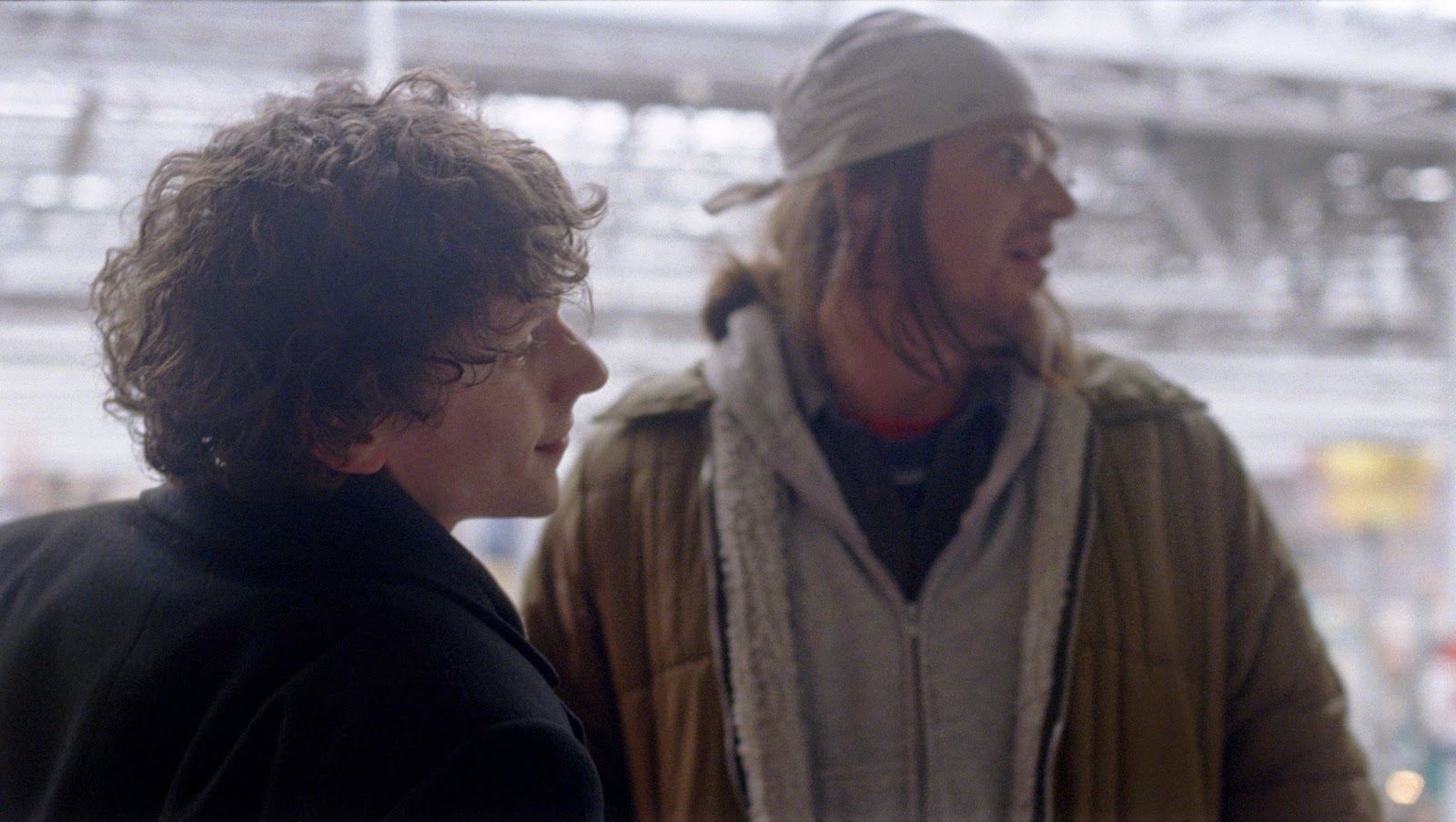 I’m Not So Sure You Want to Be Me

It’s Wallace’s alleged addiction to heroin that fuels the most prominent conflict between the writers. As Lipsky seeks to incorporate the addiction angle into his story, Wallace is less annoyed with the questions surrounding his purported habit than he is by the public’s inherent need to define him by it. When the question is finally posed, Segel runs through the scene with the restrained intensity of a man on the edge as Eisenberg listens intently with looks of relief and ultimately regret for having asked. It’s the closest The End of the Tour ever gets to outright drama and the closest it gets to attempting to define an artist who defied definition.

As an artist, Wallace lived in constant fear of becoming a caricature. If The End of the Tour never makes him one, it’s purely because cast and crew show a prescient level of respect for the late scribe. In one of the film’s finest moments Lipsky finds himself left alone in Wallace’s house. He wanders room to room, breathlessly noting every minute detail, certain there’s something – anything – there that somehow explains the man. But Lipsky is just naming objects and objects are not what made Wallace who he was. That we never really know that fact is sort of the point, if there is one. In Wallace’s eyes, all you can do is try and be decent, maybe try to love someone. There’s something quite liberating in that thought. 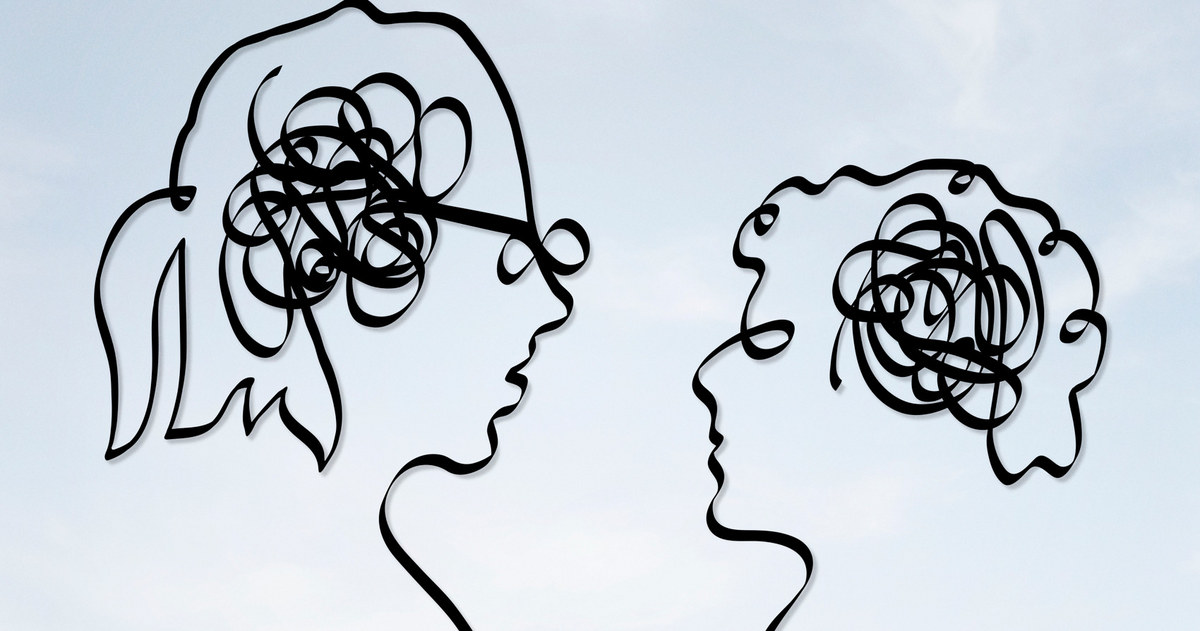 You bet. Brutally honest and insightful, The End of the Tour is worth every bit of your dollar this week. This was my second favorite film of 2015, and for good reason. Literary films often feel stale and contrived because, well, the act of writing is painfully boring to watch. The End of the Tour succeeds because it features almost no writing – only ideas. The simple exchange of thoughts and words between two writers eager to understand themselves, each other, and the world they live in makes for potent drama. Equal parts heartfelt eulogy and glowing memorial, The End of the Tour is a film of uncommon power and unshakable integrity. Of course, the ‘talky’ format of the film will not suit all tastes. Those willing to spend 106 minutes exploring the life of the literary mind will not find a more rewarding experience. Unless you finally start reading your copy of Infinite Jest – like I did.