Home NewsEntertainment The (Other) iTunes 99 Cent Rental of the Week: ‘Attack the Block’
EntertainmentTV and Movies

The (Other) iTunes 99 Cent Rental of the Week: ‘Attack the Block’ 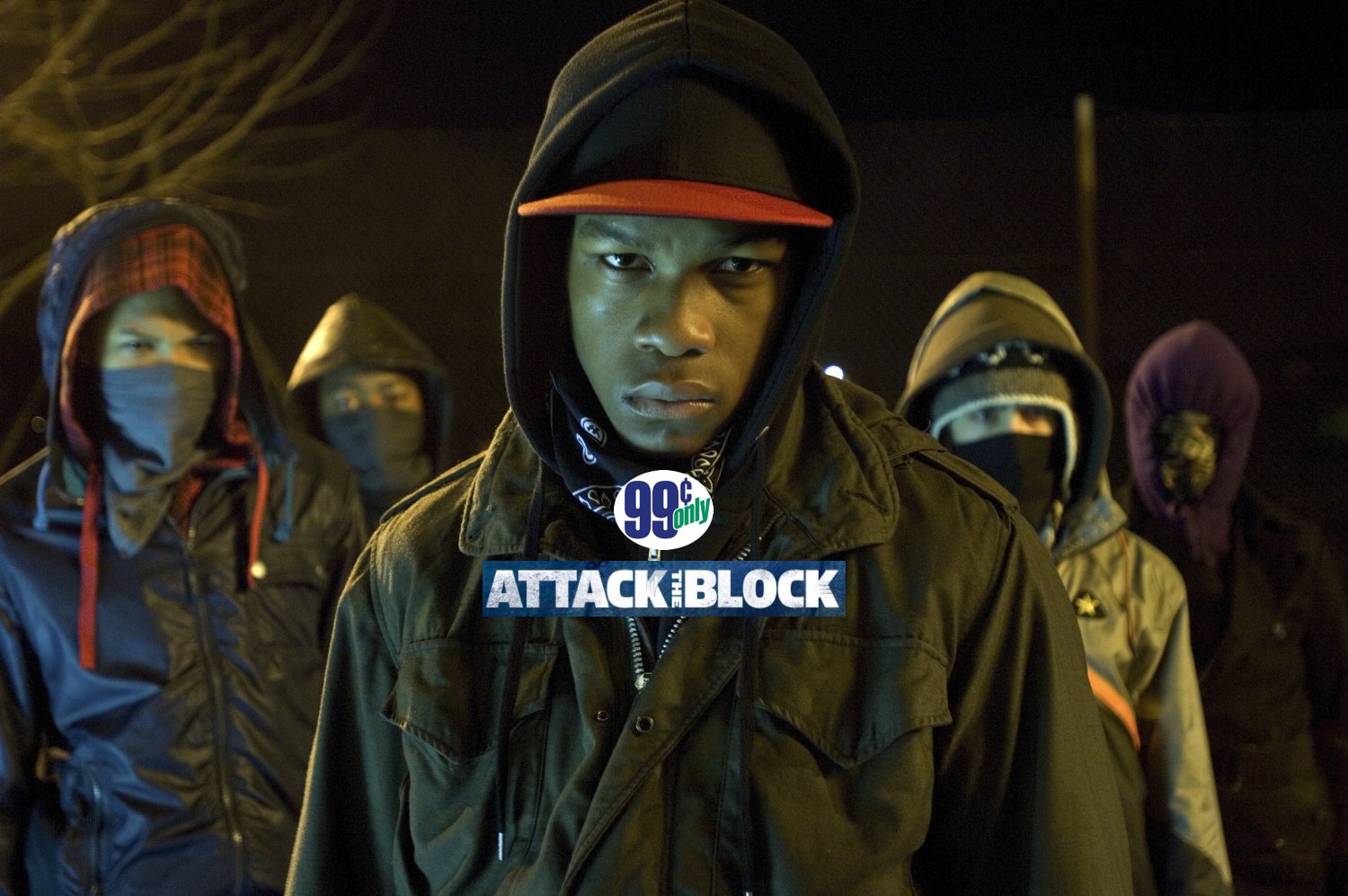 Editors Note: The featured $0.99 rental is No Escape starring Owen Wilson, Lake Bell, and Pierce Brosnan. I saw the trailer a few months back, and I’m pretty confident that I’ve seen the entire movie as a result. I’m also pretty sure it was terrible. Needless to say, I had zero interest in sitting through that film. Watch it at your own risk, and don’t say I didn’t warn you. Luckily, the kind folks at Apple always pick a smaller film to feature for the same low price. So …

This week, all hell breaks loose in a South London tenement when blood-thirsty aliens Attack the Block. 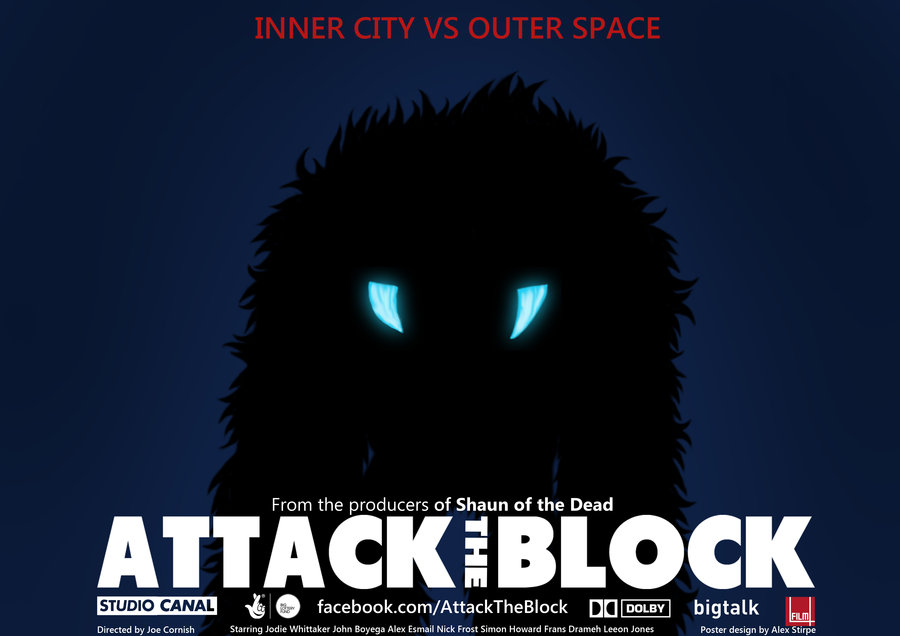 There’s Worse Things out There to Be Scared Of

Walking home alone at night is a dicey prospect pretty much anywhere on Earth these days. Hardworking nurse Sam (Jodie Whittaker) finds that out when she takes to the sidewalk after a long day’s work. Mere steps from her building, Sam runs into Moses (John Boyega) and his gang of hooded, teenaged street thugs. They steal her purse, threaten her within an inch of her life and bike off into the darkness from which they sprung. Little do we know, but we’ve just met the heroes of Attack the Block.

Moments after our heroes’ less than heroic thievery, a creature from the sky crash lands in their neighborhood. The night only gets weirder from there. As Moses and his motley band of miscreants batten down to protect their turf and their lives, Writer/Director Joe Cornish takes us on a wildly imaginative look at the mean streets of South London through the lens of a thrilling alien invasion. Mixing gore, wit, soul, and genres in profoundly rewarding ways, Attack the Block is one of the best Science Fiction films of the decade – and an instant classic in the genre. 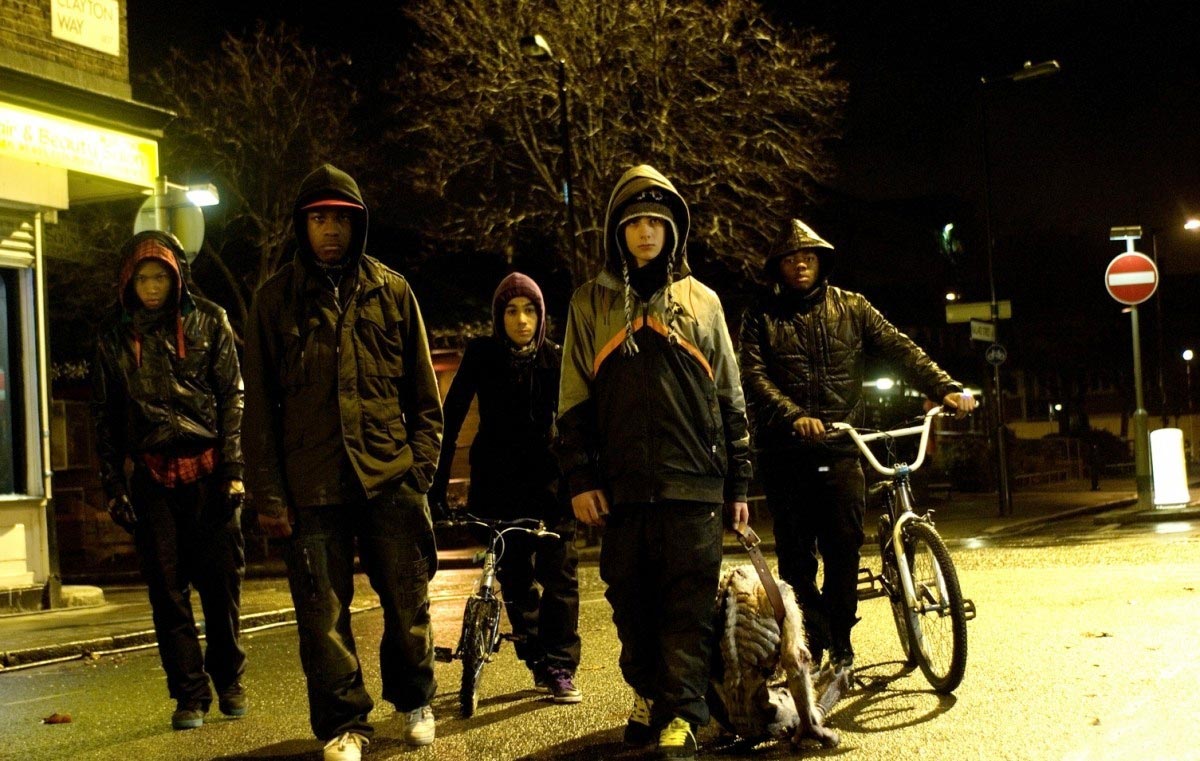 It’s rare that I’m surprised by a movie anymore. When Attack the Block was released at the tail end of a dismal summer way back in 2011, not many people gave it a chance. I’d heard of the film purely because Shaun of the Dead‘s Edgar Wright had served as producer, but I still didn’t catch it in theaters. One foggy night that November, I finally tracked the movie down via iTunes and pulled the trigger. Straight from the gritty, hyper-realistic opening moments I knew I was in for something unique. Eighty-eight minutes later, I added a new movie to my 2011 top 10. Truth be told, I snuck this cheeky little invasion flick into the top five. Revisiting the film nearly five years later proved just as rewarding an experience.

That has a lot to do with a crackerjack screenplay written by first time Writer/Director Joe Cornish. Rumor has it that Cornish cut his teeth as a stand-up comedian and that explains the scathing, scattershot nature of the comedy throughout Attack the Block. But Cornish succeeds where so many other comedian turned filmmakers fail – I’m looking at you Chris Rock – in that he builds the jokes organically into his plot. There’s not a single laugh in Attack the Block that doesn’t feel earned by an individual or a situation. It helps that Cornish peppers his film with a cast of fully formed characters. From Whitaker’s too nice but still tough nurse to Luke Treadaway’s clever but flighty stoner, Brewis, Attack the Block resonates with an authenticity vacant from most action/comedy/sci-fi flicks … not that there are many of those. That authenticity runs right through the five hoodlums who discover their inner heroes throughout the film’s single night. Cornish wisely imbues each of the gang with a genuine sense of individuality. Sure, they always feel like part of a gang, but each character can stand on his own. The escalating level of danger throughout the film carries extra weight because we come to care about these boys as individuals – even if they are all past the ‘at risk’ moment in their lives. That’s particularly true of the group’s default leader, Moses (John Boyega). Stoic and powerful but also tender and funny, Boyega’s performance is the very definition of ‘star-making’ and proof that he could carry a film long before J.J. Abrams whisked him off to a galaxy far, far away.

Still, it’s the little things that set Cornish’s film apart from the pack and raise it above a clever collection of gags and gore. A debate about how to sell an alien corpse on eBay proves far more clever than its initial setup and Cornish never fails to find compelling ways to kill off the alien invaders – or unexpected weapons to kill them with. Particularly clever is Cornish’s use of Guy Fawkes Day fireworks as cover for the extra-terrestrial invasion – not to mention the sanctity and security of the tenement building’s in-house grow room. But in the end, Attack the Block remains a fairly simple story about a community overcoming racial and class barriers with the sole purpose of looking out for each other and defending their turf. There’s something lovely about that rather simple message. Not to get all serious when talking about such a funny film but we could all use a little lesson in looking out for one another. And if you’re going to learn a lesson, there may as well be gore and aliens and a wicked sense of humor involved.

You bet. With its clever mix of simple storytelling, complex characters, ghastly gore, and whacked out humor, Attack the Block was easily the most underrated film of 2011. If you missed it back then – or never heard of it at all – now’s the time to check it out. Drop that dollar and let the gory hilarity begin. You will not be disappointed.