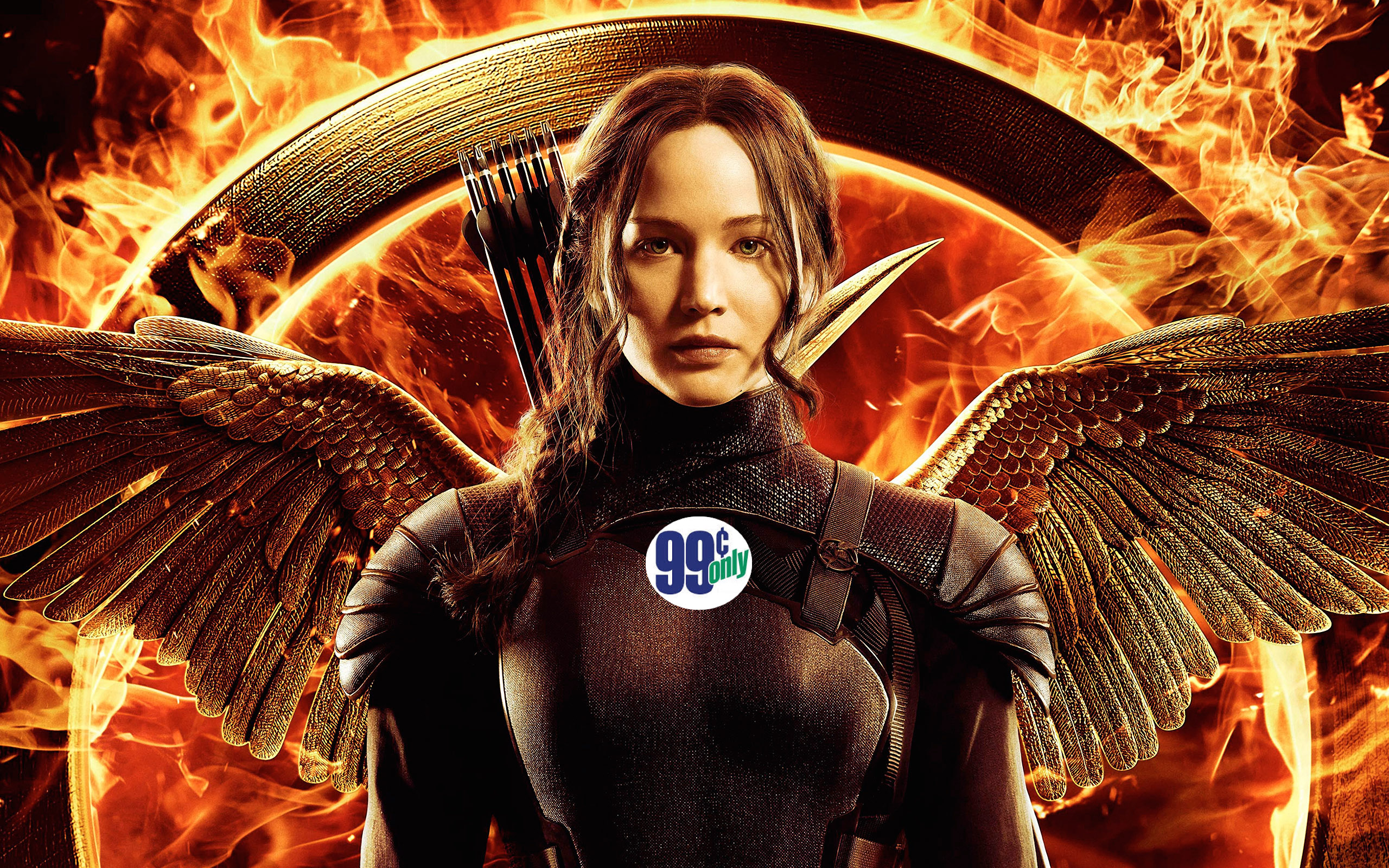 Damn you iTunes. Damn you to hell. Just when I thought I could get by without sitting through another Hunger Games film you go and do this. Yep, this week we find ourselves smack in the middle of the battle for Panem in The Hunger Games: Mockingjay Part 1. Let’s try and keep the whistling to a minimum, people.

The Revolution Will Be Movieized

In the first installment of The Hunger Games (2012), Katniss Everdeen (Jennifer Lawrence) unwittingly sparked a revolution. In The Hunger Games: Catching Fire (2013), she consciously influenced the anarchy. In The Hunger Games: Mockingjay Part I, the first of the two part finale, Katniss Everdeen begins to see the consequences of that influence. Mentally and physically burned, Katniss finds herself hiding out in a cavernous, underground complex operated by a rebel government eager to overthrow the evil empire of President Snow (the giddily wicked Donald Southerland).

Surrounded by her mother, her sister Prim, and BFF/love interest (maybe?) Gale (the beefy-shell of Liam “I’m not Thor” Hemsworth)…and, well, pretty much everyone else she’s grown to care about in the first two films, Katniss is barely holding it together. When President Coin (Julianne Moore) and her PR Guru, Plutarch (the late-great Philip Seymour Hoffman) ask her to be the face of their propaganda campaign, Katniss wants no part of it. That is until she sees what President Snow and his destruction unit did to her home in District 12. One look at the devastation brings Katniss to the edge. Seeing the sunken face of her Games partner/love interest (maybe?) Peeta (Josh Hutcherson) paraded through Snow’s TV propaganda machine is enough to push her over. Katniss steps into the role of warrior hero with a simple message for President Snow and his cronies, “Look out, Snow, cause I’m coming for you…and hell’s coming with me.” 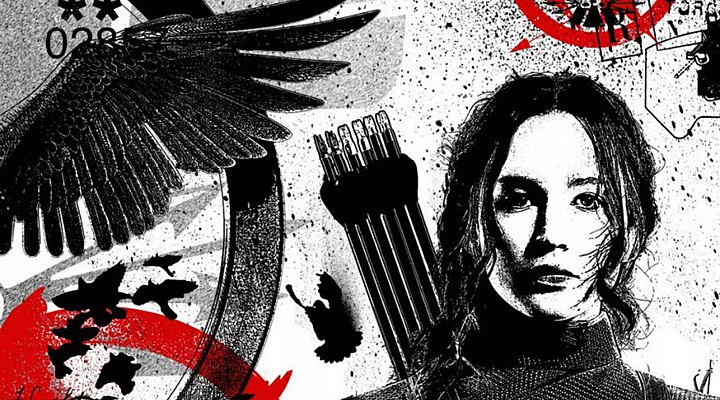 “The Best Dressed Rebel In History”

While I did see the original The Hunger Games, I think now would be a good time to let you know that I skipped Catching Fire, and I haven’t read any of author Suzanne Collins’ beloved Young Adult novels. Familiar enough with the dystopian world to get by, I was still slightly in the dark as this third film in The Hunger Games series began. To my delight, I found that screenwriters Peter Craig and Danny Strong did an admirable job of reintroducing me to the bleak world of Panem. Within the first 8 minutes, I was completely up to speed and ready to reengage with Ms. Everdeen and crew, and character engagement is what Mockingjay Part 1 is all about.

Playing mostly within the confines of the rebels’ underground lair and a few scenes in President Snow’s bourgeois palace of sin, this third part of The Hunger Games saga is a relatively claustrophobic affair. Save for one well-executed action sequence that takes place outside of a rebel hospital and a much quieter hunting excursion later in the film, there’s not much room to breathe Katniss’ world. As the Mockingjay’s story grows, the world is shrinking around her and something’s gotta give…just not yet.

With Mockingjay Part 1 telling such a restrained story, the exceptional cast of heavy-hitting actors all have time to flesh out their characters. Layers are slowly peeled throughout the film and tiny nuances add an unexpected depth to the proceedings. Woody Harrelson steamrolls through his scenes with a lack-of-boozy swagger while Elizabeth Banks finds a badly-bruised soul inside her painted lady, Effie Trinket. Not surprisingly, Philip Seymour Hoffman steals every scene he’s in with yet another graceful, giving performance in one of his final roles.

The only performance that seems like a let down is that of Jennifer Lawrence, who lets Katniss mope just a little too much in this film. Katniss is in a dark place in this part of The Hunger Games story. I get it. But we know Lawrence to be a fairly versatile actor. She has won an Oscar, after all. She’s perfectly capable of letting a little fire burn behind the Mockingjay’s sad eyes. As it is, her Katniss doesn’t quite lead this snail’s-paced film where it needs to go and she ends up little more than the best dressed rebel in District 13.

As the screen faded on those mopey eyes, I was surprised to find that The Hunger Games: Mockingjay Part 1 unfolded under the direction of Francis Lawrence. While Mr. Lawrence has always been a filmmaker with a startling visual style, one look at his filmography (he got his start working on music videos for J-Lo and Britney Spears) will tell you that nuance, pacing, and restraint have never been his thing. Saddled by a greedy studio that unnecessarily split Mockingjay into two parts, Mr. Lawrence does his best to make this penultimate film work as more than just setup. He doesn’t always succeed (the love triangle story is so poorly executed I found myself not caring if she chose either of her suitors), but there are several beautifully executed moments (like Katniss sitting on a river bank singing an eerie folk ballad) that make you want more of this world.

Sadly, more is not in the cards for The Hunger Games: Mockingjay Part 1. All build up and no bang, this film is the equivalent of driving all day to an amusement park and finding the park closing as you pull into the parking lot. 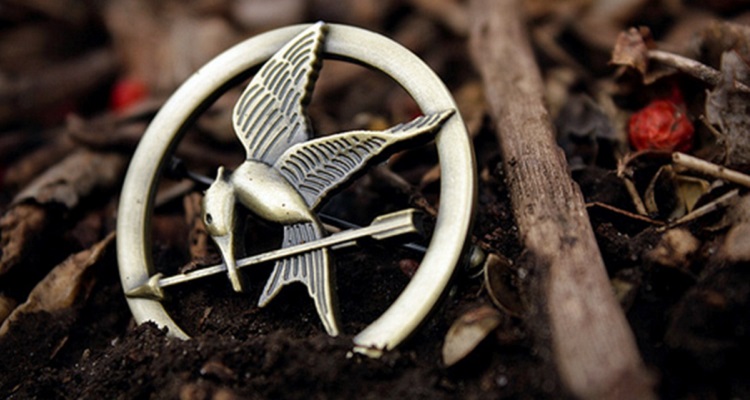 Here’s the thing, if you’re a fan of The Hunger Games books, or the first two films, then you probably don’t care what I’ve got to say about Mockingjay Part 1. You’ve already seen it, and you are likely giddy to see it again for just $0.99. If you’ve had blinders on for the past few years and know nothing of The Hunger Games world, save your money. You won’t have a clue what’s going on. I can’t recommend anyone but true fans dropping that $0.99 on Mockingjay Part 1 this week.

For those of you skipping Mockingjay but still looking to spend some hard earned cash on digital entertainment this week, kick on over to the TV section in iTunes and have a look at Kings (2009). Executive Produced by Mockingjay’s Francis Lawrence (he also directed 3 episodes), you’ll get a nice taste of his visual flair. You’ll also get a hell of an interesting story with an absolutely stellar cast featuring a fiery Ian McShane. Sadly, the show only lasted 10 episodes before NBC cancelled it, but you can watch the entire series for about $3 an episode on iTunes, or score a sweet deal and buy the season for $12.99. That’s money well spent, kids.

5 of the Latest Innovations in 3D Printing