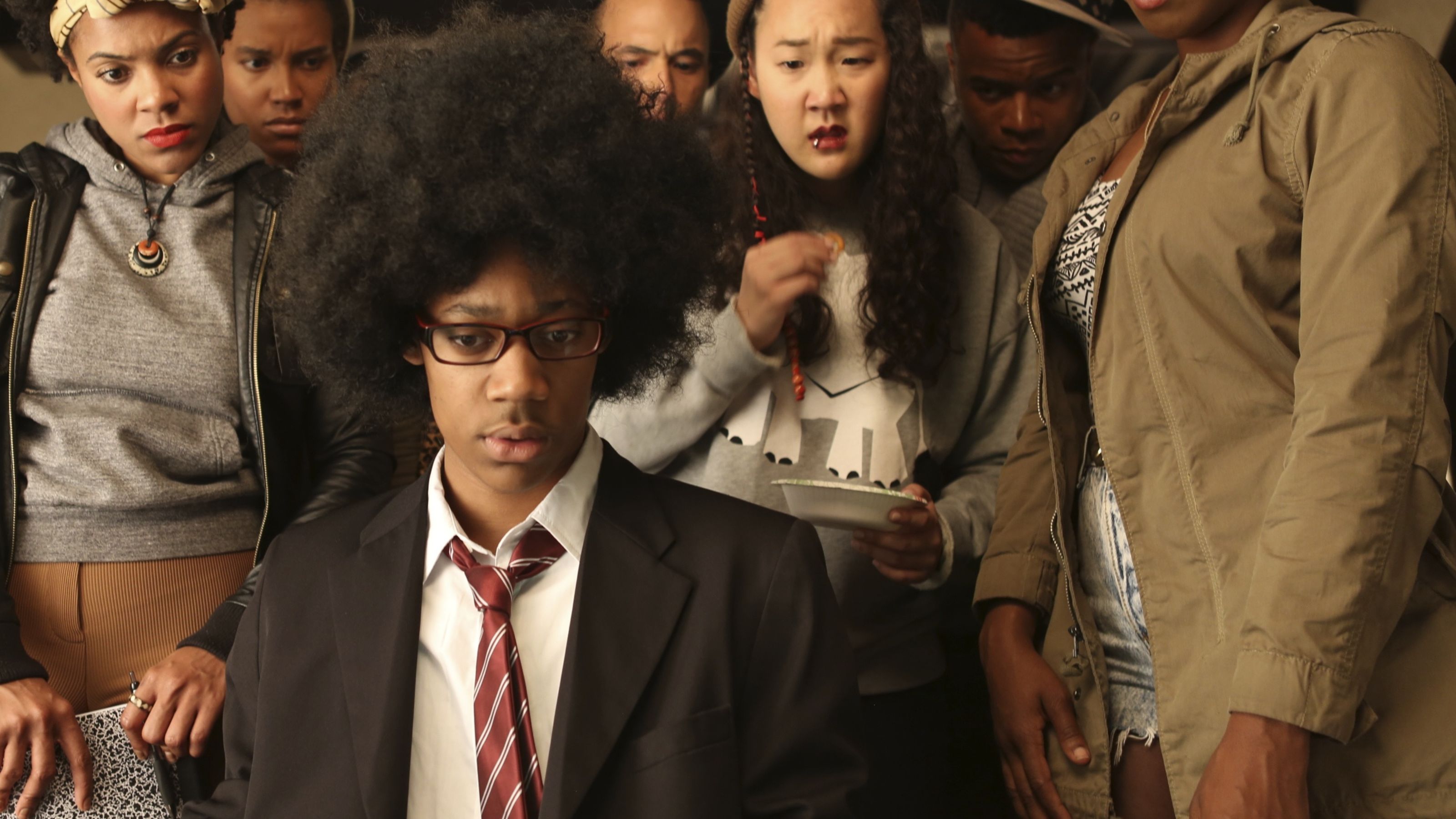 A Snapshot of a Bubble

At the time of this writing, the city of Baltimore is under lockdown after days of racially charged protests and rioting…and I still have not had a chance to watch a single episode of The Wire on HBO GO. One of those facts is important and vaults this week’s movie, Dear White People, into essential viewing. So let’s talk about it…who the hell is this Omar guy? Just kidding.

Still with me? Good, because Dear White People is a clever movie that knows (better than me) when to crack a joke and when to take itself seriously.

Set within the bubble of fictional Ivy League school, Winchester University, Dear White People opens with voice-overs from various news channels discussing a recent, racially charged “riot” on campus. Winchester’s bubble, it would seem, has just burst. A quick jump back in time takes us to the beginning of this bitingly satirical story and proceeds to lay out what exactly went wrong.

The microcosm of race relations as viewed through the prism of a college campus is dense territory and Director Simien plays it for all it’s worth.  Young, impressionable minds abound in Dear White People, with characters ready to make the world a better – or at least different – place.  Of course, we quickly find that these characters are as scared and confused as anyone else and mostly just trying to find their own place.

A uniquely focused study of black life on a predominantly white college campus, Dear White People has populated its bubble with an authentic slate of black characters.

We meet Sam White (played by Tessa Thompson) through her radio show called, you guessed it, Dear White People. Her show is clever even when it’s being racist, and we immediately get a sense of who Sam is. She’s the sort of person who will go on the radio and say things like, “Dear White People – the minimum requirement of black friends needed to not seem racist has just been raised to two…Sorry, your weed guy, Tyrone, doesn’t count.” The films she makes with her 16mm are just as potent and/or misguided. Sam is in love with being black (though she is mixed race) and Thompson plays her with a fierce energy finding just the right moments to let that energy flow through. When she speaks, people stop to listen, and maybe they find something out about themselves. 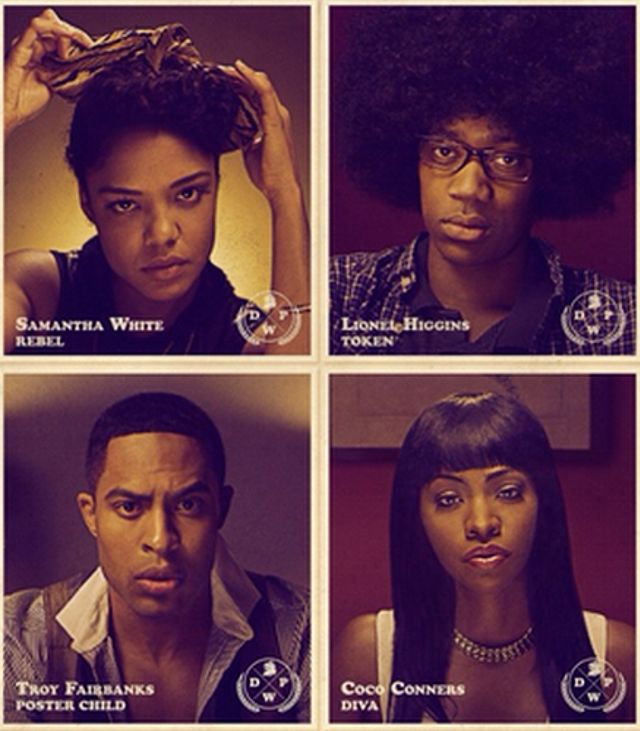 Lionel is one of those people. Lionel is the ultimate outsider on campus, a gay man and a black man (who proudly wears his blackness in the shape of a seriously epic afro). When we meet Lionel, he is pleading with the Dean of Students about finding the right place to live.  He’s a man without an island and Tyler James Williams (Everybody Hates Chris, The Walking Dead) deftly portrays the underlying desperation in his character.  A burgeoning journalist, Lionel is searching for his voice.  When Sam becomes his next assignment, he may have found the voice that helps him find his own.

Simien is slightly less successful with other central characters. Troy Fairbanks is the “golden boy” of the campus black community. Driven and confident outwardly, Troy (relative newcomer Brandon P. Bell) is less sure of himself inside. To make matters worse, his father (played by the always wonderful Dennis Haysbert) is Dean of Students at Winchester and not the sort of man to sit back and watch his son fail at anything.  Bell puts solid work in as Troy and the character works well until the last moments of Dear White People, when the Troy fails to live up to his growth.

Speaking of growth, Colandrea Conners fails to do so at all throughout Dear White People, which is a shame because I really wanted to like this character.  As portrayed by Teyonah Parris (you may recognize her as Dawn from Mad Men), she goes by “Coco” because Colandrea sounds too “ghetto.” Coco worked her way out of the West Side of Chicago to get to the Ivy League and has assimilated her entire character to fit that mold. What the black community calls a “nose job” (I had no idea what that meant and I won’t ruin it for you), Coco is most desperate to become a reality TV star and to have people know her name. I’m sure the character reads well in Simien’s script, but something is lost in the performance. Coco flirts with change and growth throughout Dear White People, but never really does and left me frustrated in the end.

White People, Am I Right?

I should be completely up front and tell you that I am white people. I had serious trepidations about watching this movie because the title, Dear White People, breeds a certain expectation. Given the state of race relations in America right now, I was hardly looking forward to a lecture about how silly and insensitive white people can be. It’s hard enough to watch the news without a tinge of guilt sometimes, and I was not looking forward to an entire movie potentially designed to make me feel that. To my surprise, Dear White People does not come across overly preachy or even judgmental.

Writer-Director Justin Simien has crafted a sharp script and a strong film his first time out. His story always manages to find the right tone in even the most delicate situations and while Dear White People does point the occasional finger, that finger is pointed at the black community as often as the white. Yes, the “villains” in Dear White People are selfish white kids, but I was fascinated by the way this film doesn’t exactly judge them for their ignorance.  More aptly, Dear White People points its biggest finger at the television shows, movies, music and popular culture that breed their ignorance, and ignorance is what Dear White People is truly at war with. The absurdity of the party that drives the tension at the end of the film is driven by ignorance, not hate, and that is what makes it dangerous. Be sure to check out the photographs during the credits of Dear White People, by the way. Those are real parties and real college kids and that is very, very disturbing.

Though it’s title betrays slightly its actual message, Dear White People is an important film even if it doesn’t feel important.  Rather than sulk and rage at the ever-present racial tensions in our world, Dear White People takes a deep breath and an honest look at those tensions before deciding that sometimes you just have to laugh about it. Watching the news the past few days, I found myself with an urge to make the people of Baltimore laugh again, and an understanding of how hard that can be sometimes. Clearly, laughter is not the easy fix for Baltimore or any other city in America. A calm, honest, and open dialogue is where healing actually begins. That’s why a movie like Dear White People is important right now. It’s not afraid to tackle a heavy issue and uses a wicked sense of humor to make really valid points, and that may just start a conversation.

Either the folks at iTunes are offering a sly bit of commentary this week, or they are being shamefully opportunistic. Either way, they found the right movie for the right time. With a stellar cast and a unique view of the world Dear White People is well worth that $0.99. It’s not the new Do The Right Thing (fascinating double-feature idea if your interested) but its heart, its mind and its soul are in very right places. You will laugh, you may cry and (black or white) you may feel really bad about yourself for a fleeting moment or two, but you won’t linger on the feeling. Dear White People won’t let you.