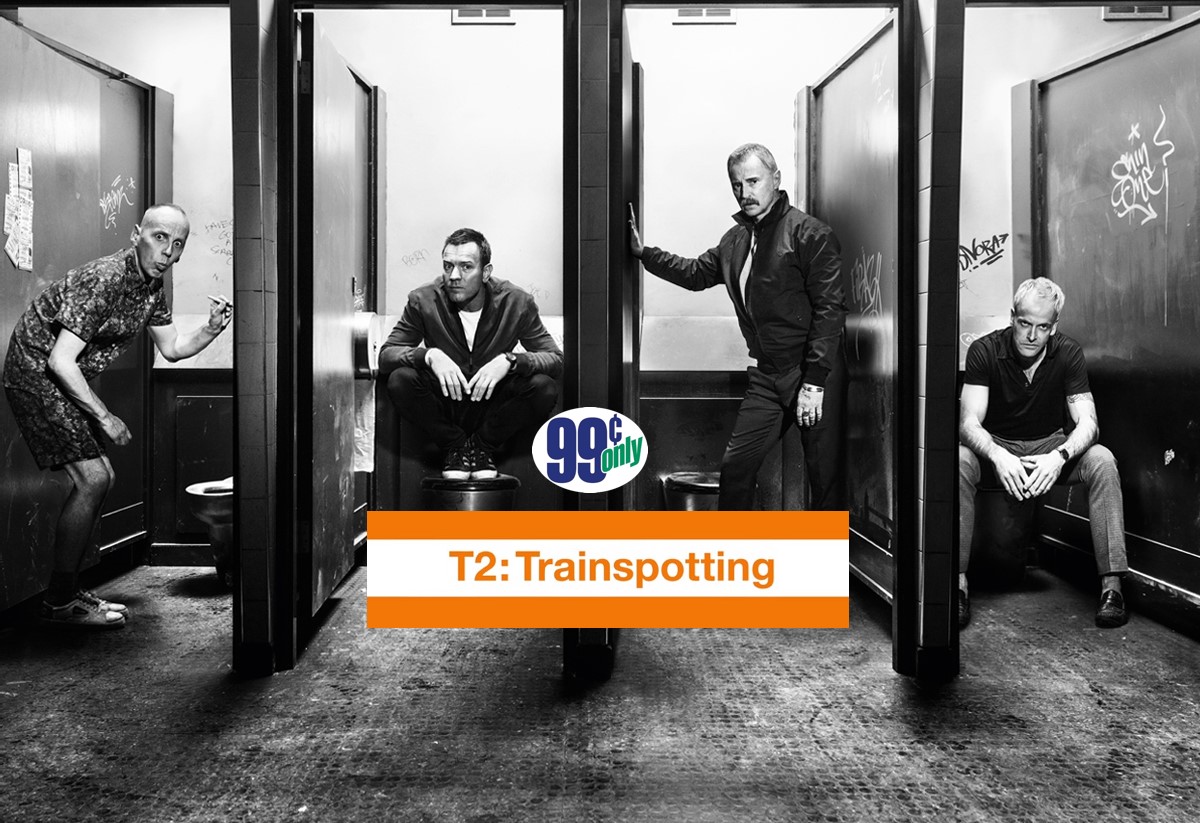 This week, Spud, Rents, Begbie, and Sick Boy get the band back together (sort of) in T2 Trainspotting.

It’s been two decades since Mark Renton (Ewan McGregor) swindled Sick Boy (Johnny Lee Miller), Spud (Ewen Bremner) and Begbie (Robert Carlyle) out of nearly £16,000 and left his hometown of Edinburgh forever. When Renton is forced to return home, he can’t help but look up his old pals. But 20 years may not have been enough to heal up old wounds. And Renton’s presence may open up a few new ones. Thus begins the senseless, spiritless nostalgia trip that is Danny Boyle’s T2 Trainspotting.

Nostalgia … That’s What You’re Here For

Not that nostalgia’s a bad thing exactly. Sometimes it feels really good to hang out with long-lost friends and rehash the good ole days. And it’s easy to see what led the Trainspotting team back to Edinburgh for this sequel. After all, the 1996 original was a genuine ‘lightning in a bottle’ moment for everyone involved. One that put Boyle on the cinematic map, made a star of Ewan McGregor and pitched his co-stars (also including Kelly MacDonald and Shirley Henderson) on the road to steady-working actor status. Once Author Irvine Welsh published a sequel to his breakthrough book, well, the only question was, “why wouldn’t everyone return for a sequel?”

T2 picks up 20 years after the original film ended, and life has not been kind to the boys over that period. Begbie – still a sociopath with violent tendencies – has spent much of that time in prison. Sick Boy lives a cocaine-addled existence hustling unfaithful husbands to pay his drug dealers while romancing a sex worker. And Spud has continued his spiral into the depths of heroin addiction, losing his wife and son in the process. Only Rents appears to have gotten his act together. But that charmed post-Edinburgh existence quickly proves to be little more than an act. And so, with the boys’ lives an utter mess, they fall back into their old patterns of trying to lie, cheat, and steal their way to the top.

The top of what remains to be seen. And the murky, directionless narrative that Screenwriter John Hodge spins in T2 has little interest in fleshing out any real motivation for its characters. Sure, there’s a revenge plot in play. There’s the old buddies trying to reconnect angle too. There’s even an embarrassingly half-hearted love triangle in the mix. But nothing ever seems to come from those entanglements. Threats are made. Acts of violence erupt. That violence even escalates throughout the film. In spite of the film’s dramatic entanglements T2 lacks any sense of urgency … or even a real sense of danger.

Part of the problem is that drugs are largely left to the sidelines in T2. One of the things that made the original Trainspotting such a riveting experience was the sense that it took an up close and personal look behind the ugly face of addiction. As that film progressed, it felt like any of the characters might succumb to their addictions at any given moment. Add Begbie’s penchant toward violence and you got a powder keg of dramatic tension to build on. Without the constant danger of heroin lurking in every scene, T2 is just another silly film about bungling small-time crooks.

Still, the film is not without its charms. Aided by cinematographer extraordinaire Anthony Dod Mantle, Danny Boyle brings his usual blend of visual panache and stylistic swagger to the mix. And almost in spite of the film’s poor scripting, the performances from T2‘s principle cast are across the board solid. That’s especially true of MacDonald and Henderson who appear in little more than cameos this go round.

But watching T2 Trainspotting is sort of like running into an old friend who desperately wants you to remember how much fun you used to have as kids. It’s that sense of trying too hard that ultimately sinks T2. It’s present in the film’s ‘out to shock’ writing (i.e. that ‘choose life’ speech). It’s present in the showy, intrusive soundtrack. And it’s present in the very fact that the film exists to begin with. The original Trainspotting worked because of its pitch-black cynicism … particularly in its ambiguous final moments. It was the idea that there may be no real future for Rents and the boys that hammered Trainspotting‘s point home. That T2 Trainspotting gives them a future essentially leaves it feeling like a sort of anti-nostalgia. The sort that takes the piss out of the original and leaves you wondering if there was ever any point to the madness in the first place. 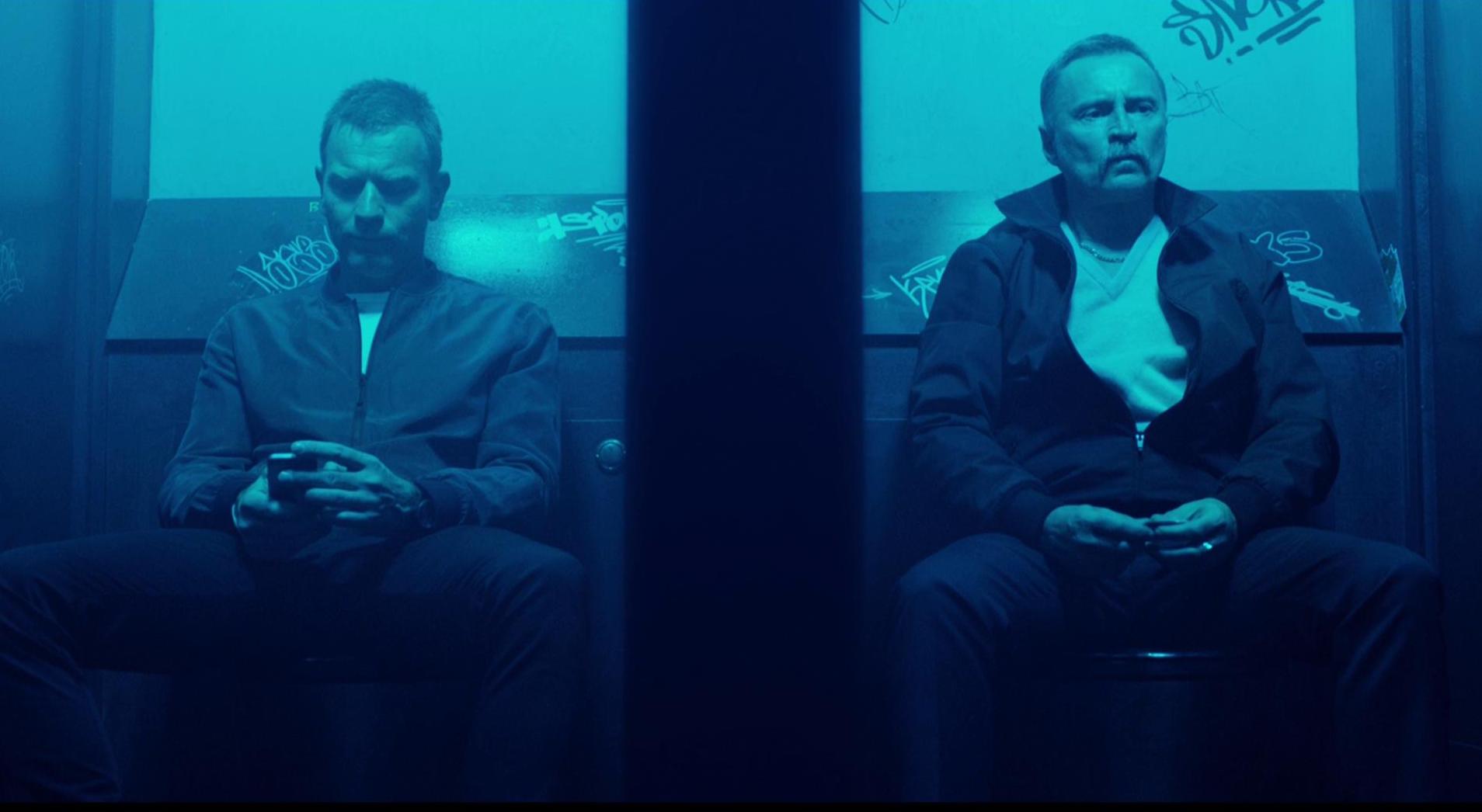 Life comes down to choices. And yes, it’s a bit too easy these days to, “Choose handbags, choose high-heeled shoes, cashmere and silk, to make yourself feel what passes for happy. Choose an iPhone made in China by a woman who jumped out of a window and stick it in the pocket of your jacket fresh from a South-Asian Firetrap. Choose Facebook, Twitter, Snapchat, Instagram and a thousand other ways to spew your bile across people you’ve never met. Choose updating your profile, tell the world what you had for breakfast and hope that someone, somewhere cares. Choose looking up old flames, desperate to believe that you don’t look as bad as they do. Choose live-blogging, from your first wank ’til your last breath; human interaction reduced to nothing more than data.”

Without getting all preachy, we just want to say that whatever you choose to do with your life, you can and should make the wise choice of skipping T2 Trainspotting. Though you could probably spend a little less time on Facebook, Twitter, Snapchat, and Instagram as well.