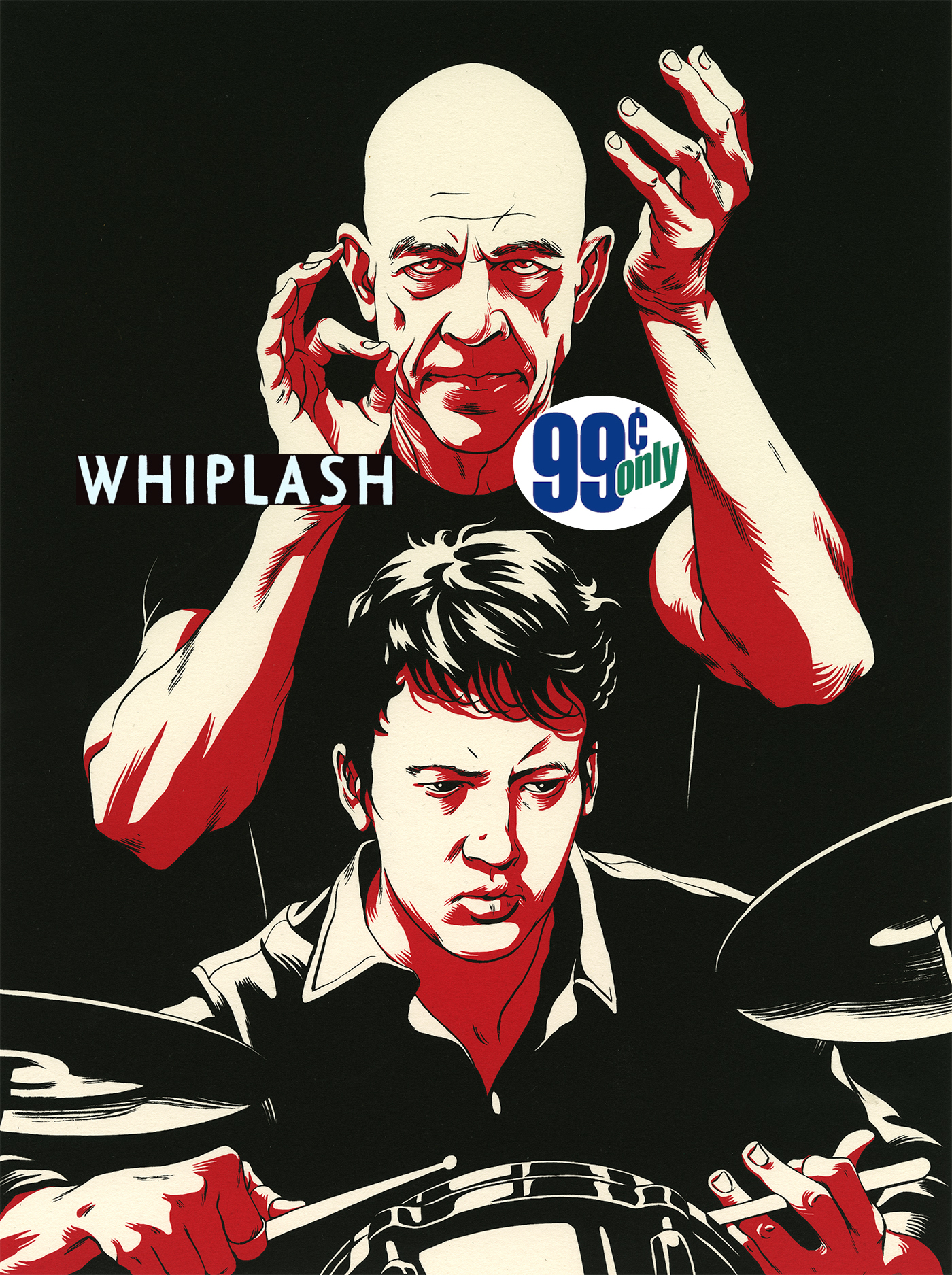 Whiplash opens with the soft tapping of a snare drum. Andrew Neimann (Miles Teller in a performance that begs the word “breakout”), first year jazz drummer at prestigious (though fictional) Shaffer Music Conservatory, practices alone in his rehearsal space. Little more than a closet, the space is violently filled with sound as Andrew’s soft tapping builds to a feverish barrage of chaotically focused drumming. Looking up, Andrew sees that he is being watched. Dressed all in black and appearing almost ghost-like, Terrence Fletcher (J.K. Simmons in the role of a lifetime) asks why Andrew stopped playing. Soft-spoken and intense, you begin to see a beast inside Fletcher as he rigidly picks his way through a tricky conversation with Andrew. It’s hard to tell if Fletcher is toying with the kid or genuinely interested until he asks Andrew to play double-time swing. Cocky and eager to impress, Andrew lets loose with his slickest moves. When he looks up again, Fletcher is gone. Beginnings are important and this one nimbly sets the tone for the destructive master/student relationship at the center of Whiplash.

In need of a mentor and just naive enough, Andrew is in awe when Fletcher selects him to join the school’s renowned jazz ensemble. When Andrew answers the call and sits down at the drum kit to play for the class, awe turns to terror as Fletcher unleashes a relentless barrage of verbal, emotional, and physical abuse. Brutal, exacting, and ferocious, Fletcher will stop at nothing to push Andrew to the limits of his abilities…and far beyond. Perfection is not the goal, it is the standard and Andrew will have to dig deep to rise to the top. The vociferous teacher is quick to find that a word like “limits” does not apply to Andrew, whose drive to be the best may push both men over the edge.

A fierce battle of wits and wills plays out and like all great jazz, nothing ever goes quite where you expect. A taut examination of what it takes to achieve greatness, Whiplash plays all the right notes on its way to a remarkably satisfying climax where the line between master and student blurs in wonderfully unexpected ways.

The Master and The Student

A stunning achievement in style and substance, Whiplash finds its soul and its muse in two acutely realized performances from its leads, J.K. Simmons and Miles Teller.

As Terrence Fletcher, the beastly, unruly, and unholy master at the center of Whiplash, J.K. Simmons turns in a career-defining performance. Walking a fascinatingly fine-line between hilarious and terrifying, his Fletcher is equally charming and vicious. He believes that he is at Shaffer to push every single student to greatness. In one of his more human moments, Fletcher states, “There are no two words in the English language more harmful than “good job.” That Fletcher truly means it tells you all you need to know. At times, he’s the sort of person you want to bleed for and the perfect mentor for Andrew. With a man like Fletcher, blood is never quite enough. He demands your soul, and he will try to break it if that means pushing you to greatness. Portrayed by Simmons with a volcanic intensity that is perpetually on the verge of erupting, we spend much of the film waiting, almost wanting Fletcher to rage, then cowering when he does. In either scenario, we cannot look away from Simmons as he cages and releases the beast at just the right moments. It’s a high-wire performance that could have easily fallen into a menacing schtick, but Simmons finds the humanity in the animal, and we grow to love and hate his Fletcher in much the same way his students do.

Simmons has been “oh THAT guy” in films, television shows, and commercials for decades, but seemed happy to play on the edge of stardom. After Whiplash, and an Academy Award for Best Supporting Actor, that may no longer be an option. Seizing on a maniacal energy (his “not my tempo” moment may become the new “I drink your milkshake!”) only glimpsed at in his previous roles, Simmons brings a soul, black and bruised as it may be, to Fletcher and elevates him from pure bully to truest form of teacher. The kind of teacher who knows you haven’t reached your peak.

Almost completely overshadowed in Whiplash is Miles Teller’s performance as Andrew. Ambitious and driven in ways that even Fletcher may not understand, Tellers’ Andrew relishes the thought of leaving himself behind in order to become the musician he desires. We begin to understand Andrew’s drive in scenes with his father (Paul Reiser who shines in a small role), a failed writer who maybe never pushed himself enough and refuses to give his son the push he needs. It’s an intriguing relationship, and Teller gracefully captures both the love and disdain Andrew feels toward the man who raised him. When Fletcher enters the picture, Andrew finds a dangerous fan for the fire inside, but doesn’t fully comprehend the cost. Teller finds a strange balance in these complicated emotions. He hates Fletcher, but understands that he’s better because of him. Andrew’s talent and ambition seem to meet somewhere in the middle. We saw a glimmer of what Teller was capable of in The Spectacular Now (2013), but nothing can prepare you for what he brings to Whiplash. At ease in quiet, lonely moments (there are lots) and taking abuse from his venom-spewing mentor, Teller never beats a false note as Andrew. Andrew’s ambition can be frightening and even frustrating, but Teller finds just enough softness around the edges of his prickly character to keep us firmly on his side.

Whiplash is a huge leap forward for Teller. An accomplished rock drummer in real life, Teller spent four hours a day for two months learning to play jazz style in preparation for his role. It turns out to be key, as scenes of Teller at the drums (roughly 1/3 of screen time) could be filmed without cutting away to stock footage. Seeing Andrew destroy his drumsticks (and himself) up close and personal, gives Whiplash a unique level of authenticity.

Of course, astonishing performances do not a great film make, and under the graceful direction of Damien Chazelle, Whiplash becomes something altogether original. 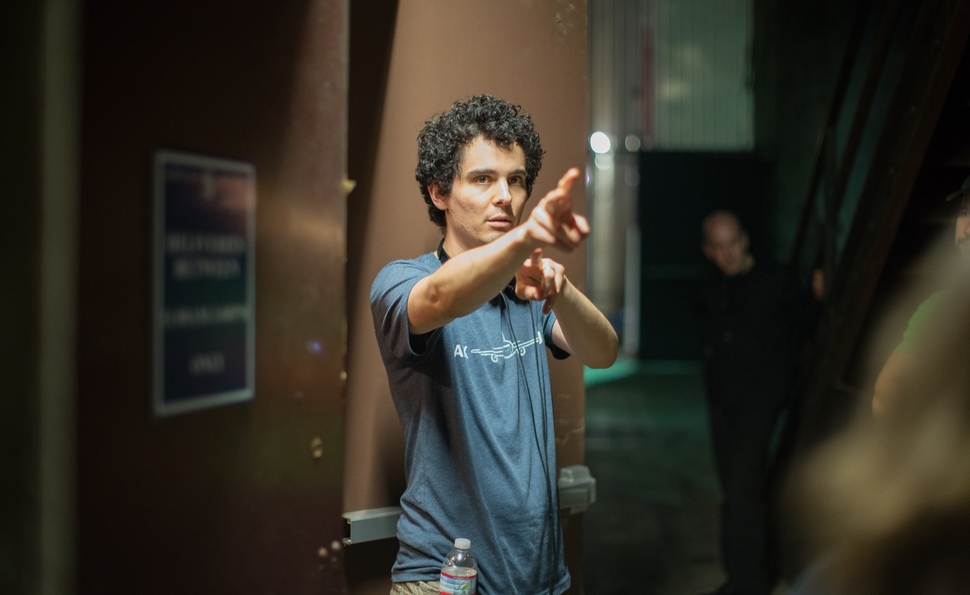 If I’ve spent a chunk of time talking about the actors in Whiplash it’s because they really are that good. Even great actors need guidance, though, and guiding these performances is their own maestro, Damien Chazelle. Based on his short film of the same name (also featuring J.K. Simmons), Whiplash is written and directed by the relative newcomer with a remarkable degree of confidence. Though his script misfires with a largely unnecessary romantic side story, Chazelle finds his legs in the beautifully scripted moments between his two leads. Utilizing claustrophobic interiors, desperately-invasive camera work from Sharon Meir, and a subtly tricky narrative, Whiplash has the look and feel of a movie on the edge of control. Confounding expectations and cleverly guiding the viewer deep into his dangerous world of pride and obsession, Chazelle shines a devastating light on the darkest corners of ambition. In the process, Whiplash becomes a singular exploit from a fiercely driven artist that would impress even Terrence Fletcher…nothing short of true jazz.

Not only worth that $0.99 this week, Whiplash is a genuine steal at that price. A taut, uniquely focused work, Whiplash is a film unafraid to challenge your expectations and eager to reward your faith in storytelling.

Keep in mind while watching Whiplash, and let me be clear, YOU NEED TO WATCH WHIPLASH, that Damien Chazelle and company shot this film in just 24 days. Did I mention that it has the look and feel of a movie on the edge? Seems likely that it was, and maybe that’s why Whiplash works.