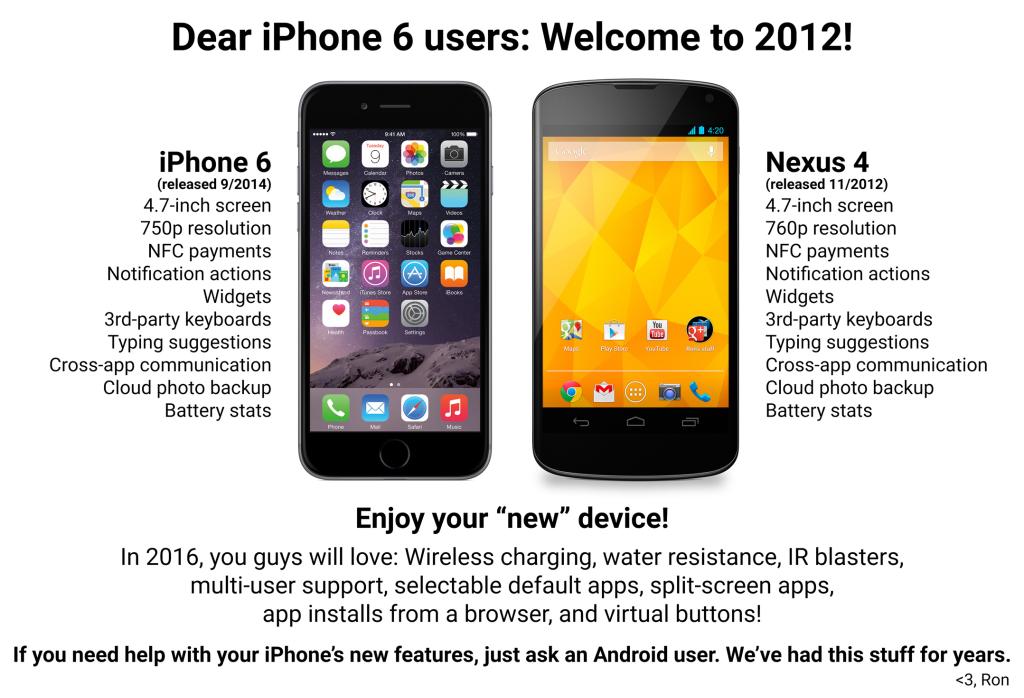 Apple announced that more than 4 million iPhones had been pre-ordered within the first 24 hours, a record breaking number. This shouldn’t come as too much of a surprise, considering that each time Apple has released an iPhone they’ve had record sales, each one dwarfing the last by a considerable margin. This is despite the fact that each successive iteration of smartphone has changed only a small amount. In fact, with this latest release iPhone users are only now getting features that Android users have had for two years or more, like support for 3rd party keyboards and NFC payments. Not only that, but the iPhone still lacks even more useful technologies like wireless charging, water resistance, and IR communication between phones, all of which come standard on Android devices.

So why are iPhone sales higher than ever?

Everything else is purely cosmetic. The case is smoother, the fingerprint reader is now obligatory, and all the buttons are still in the exact same spots. The faster processor is a given at this point, so much so that it can hardly be called a feature at this point.

This is all coming from a longtime Apple user. My first cellphone was an iPhone. I still use an iPhone. And yet, as a lifelong Apple fanatic, there’s nothing in the latest iPhone that I’m impressed with.

In fact, there have been times even with my own device where I feel like I’m lagging behind the curve.

All my friends are Android users, and on multiple occasions they’ve been able to do things with their phones that would be impossible with my phone. Things like pushing locations or contacts over IR, charging their devices wirelessly, using 3rd party keyboards, or having voice activated AI. In fact, these are all things which are still lacking in the iPhone 6.

Instead, Apple focuses on silly, superfluous things like Apple Health, and I’ve already shared my views on that.

So instead of focusing on actual, real hardware upgrades, Apple has pretty much admitted that it finds cosmetic upgrades far more important. What’s worse is that we’re telling them that we’re OK with that. Every year we tell Apple that we don’t care that they haven’t come out with any new technological advances, or even caught up with their competitors, so long as they give us a new looking phone.

This is somewhat counterintuitive coming from a company like Apple. After all, they pretty much invented the personal computer. They did invent the mouse. The original iPhone was a technological marvel.  You would hope that the company would continue to place innovation on a higher level than aesthetics.

Admittedly, the newest iPhone looks pretty slick. It’s a pleasure to look at, and I’m sure that it will feel just as good as it looks when you finally hold it in your hand. However, beyond promising to take better pictures and occupy more space in your pocket, the iPhone 6 isn’t an upgrade by any means.

Of course, this has been a criticism of Apple for a long time now. Instead of focusing on actual, tangible upgrades, they focus almost entirely on aesthetics, pretend that they’re ahead of the curve, then charge insane prices for the same product that they released last year. It’s become so bad that Samsung has launched an entire ad campaign that criticizes Apple’s lack of innovation.

All things considered, I think my next phone won’t be whatever Apple comes out with two to three years from now. It’ll be an Android.