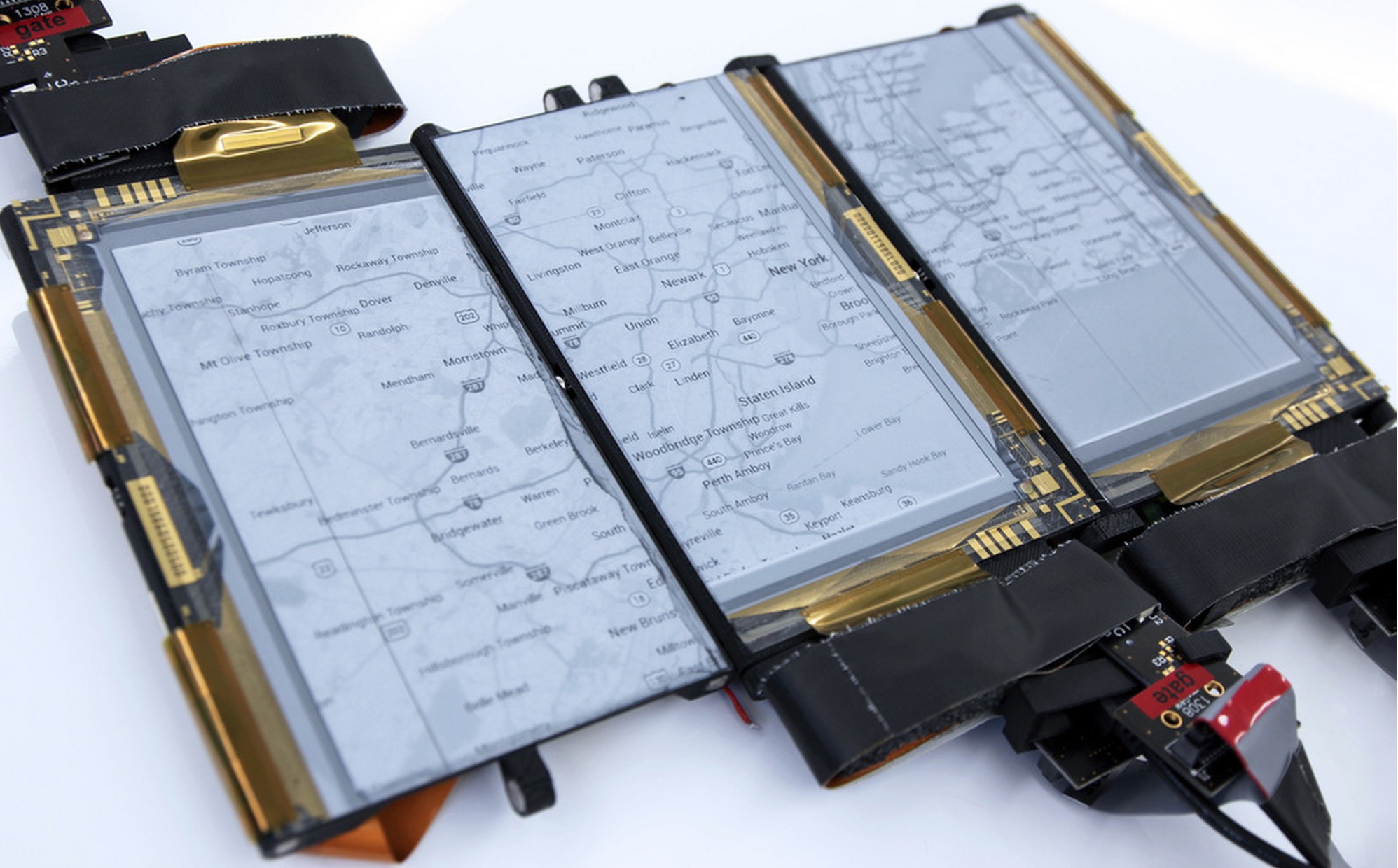 Only a few years ago, phones that flipped open were revolutionary. Then phones with slide out keyboards took their place. Then phones with touch screens. Then full on smart phones. Now, the flip phones are coming back, combined with the smart phones. Queens University Media lab may have given birth to the next design of phones. PaperFold is a prototype for a new smart phone complete with three screens. Its anomaly is that it can fold open in different layouts, letting you rearrange the setup of the phone for how you want to use it.

PaperFold’s screens are made of flexible ePaper material, something similar to what is used for Kindles. The screens can fold, detach, and be rearranged at your leisure by the use of magnets. As you alter your phone, the screens recognize the new shape and alter the graphics to fit the new set up. Thus, you can open in like a tiny notebook and keyboard. You can pull it out and share it like a digital roadmap. The video demonstration produced by Queens’ Human Media Lab illustrates its uses as a 3D modelling tool and a photo album. What is more, this multi-screen device facilitates sharing information while on the phone. PaperFold’s diverse functionality makes it ideal for users who have trouble reading small text, or using tiny keyboards, since you can adjust the size to however you see fit.

Use in the Culture

“In PaperFold, each display tile can act independently or as part of a single system,” says Dr. Roel Vertegaal of Queens’ Human Media Lab. “It allows multiple device form factors, providing support for mobile tasks that require large screen real estate or keyboards on demand, while retaining an ultra-compact, ultra-thin and lightweight form factor.” This system would be easily marketed to a shifting culture that is already invested in multiple screens. In 2012, The Guardian reported that 75% to 85% of TV viewers were using other devices while watching. This is certainly still true today, most people probably don’t even realize that they are texting while watching a movie, or playing phone games while sitting in front of the TV.

Should PaperFold reach the market in the near future, its main competition may be Google’s new phone developments in Project Ara. Google’s idea is to create smart phones that are “Designed exclusively for 6 billion people.” Project Ara, which is planning a launch in January of 2015, is a system which will use 3D printing to allow customers to design the functionality and appearance of their own smart phones. Which will appeal more to the cell phone users of the world, a phone that can shift to fit their own purposes, or a phone that you can design yourself?